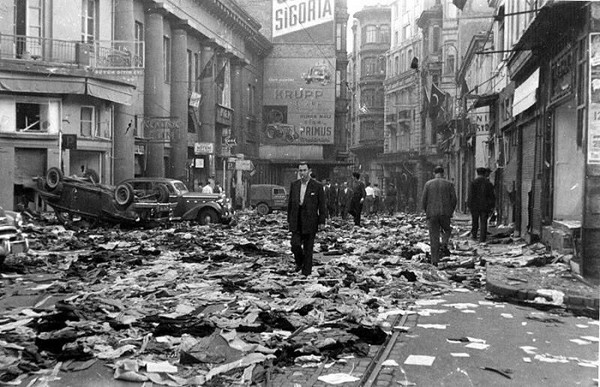 The Human Rights Association (İHD) and the Peoples’ Democratic Party (HDP) marked the 66th anniversary of the İstanbul Pogrom.

On September 6-7, 1955, mob attacks targeted homes and businesses of İstanbul’s Rum minority, as well as Armenians and Jews, leaving more than a dozen dead.

The events were triggered by the fake news that a bomb attack took place against the house where Mustafa Kemal Atatürk was born in Thessaloniki, Greece.

« The September 6-7 pogrom should be confronted with and material and spiritual losses should be compensated, » the HDP said in a written statement yesterday (September 6).

« Today s the anniversary of the 6-7 September 1955 pogrom, which is one of the shameful pages of the history of humanity. Sixty-six years have passed since the systematic pogrom against Christian and Jewish citizens, especially Rums and Armenians, in many places in the country such as İstanbul and İzmir.

« The policies such as the prohibition of the return of Armenians who escaped from the 1915 genocide to their homeland, the 1936 Declaration, the Wealth Tax and the Law on Foundations continued to exist with the 6-7 September Pogrom.

« Statements by former Special Warfare Department Chair and National Security Council Secretary-General Sabri Yirmibeşoğlu that ‘September 6-7 was a Special Warfare job. It was a magnificent organization. And it reached its goal’ is a confession that the pogrom was implemented as a state policy.

« The attack was also a striking example of how the rulers used racism and enmity towards the others to overshadow social problems and political and economic crises in every era.

« Just like the increasing racist attacks on the Kurds today, hate speech/crimes continue against different peoples and beliefs, we are still experiencing September 6-7. »

The HDP noted that the pogrom has not been officially denounced and no steps have been taken to compensate for the losses.

« This shame against the ancient peoples of this country must be confronted to ensure equal citizenship, build a future free from hatred and discrimination and ensure social peace. »

HDP deputy Garo Paylan submitted a motion for a parliamentary inquiry into the pogrom in order for its perpetrators to be found and losses to be compensated.

The İHD stated, « September 6-7 is not only a result of the anti-minority policies of the Republic of Turkey, but also of hostility and hatred towards non-Muslim peoples in large sections of society. If we do not fight against this enmity and hatred, similar large-scale attacks can always be repeated. The only solution is to create a broad front against racism. » (DŞ/VK)‘Turkey must confront İstanbul Pogrom’Today is the 66th anniversary of the pogrom against Rums, Armenians and Jews that took place on September 6-7, 1966.

Fehim Taştekin: « If you criticize Turkey’s border policy, you are a traitor »

« After Turkey lost two soldiers in Syria last week, Turkey’s Defense Minister went to the boarder and stated that, “revenge of our martyrs has...
Read more
ARTICLE A LA UNE

The recent decisions of the Committee of Ministers of the Council of Europe concerning Osman Kavala and Selahattin Demirtaş demonstrate that the committee no...
Read more
ARTICLE A LA UNE