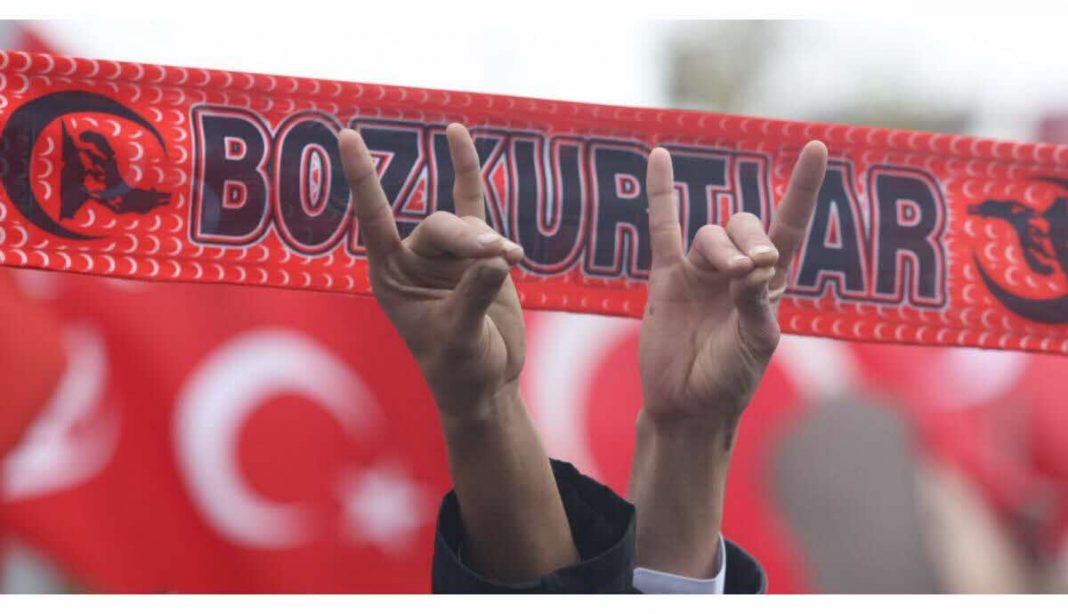 France’s decision to outlaw the Gray Wolves marks a new milestone in Erdogan’s showdown with Europe over Turkish migrant groups, which he uses as a tool to advance his political agenda.

Tensions between Turkey and France, stoked by the French government’s plans to tackle “Islamist separatism,” are spilling over to Austria and Germany as Turkish Islamist and nationalist groups in Europe, mobilized by Ankara, are coming under tighter scrutiny.

As France reeled from a string of terrorist attacks in late October, Turks in France staged nationalist demonstrations to the backdrop of clashes between Azerbaijan, a close ally of Turkey, and Armenia. Tensions flared after several Turks were injured in an altercation with protesters from France’s Armenian community near Vienne. A Turkish demonstration in Lyon’s district of Decines — known as “Little Armenia” — further alarmed the government as participants hurled insults and threats against Armenians.

On Nov. 4, Interior Minister Gerald Darmanin announced a ban on the Gray Wolves movement, which he said had been involved in acts of aggression against Kurds and Armenians, including the defacing of two sites dedicated to the Armenian genocide memorial in Decines, with graffiti reading “Gray Wolves” and “RTE” — the initials of Turkish President Recep Tayyip Erdogan. Ankara responded by saying that “there is no such movement called Gray Wolves” and vowed to further respond “in the strongest way.”

Indeed, there is no organization officially registered as the Gray Wolves, which has led many to play down the French ban as posturing. This, however, does not preclude judicial action against the Gray Wolves, based on symbols and signs. Darmanin conceded that the Gray Wolves were not a formal association but insisted they formed groups that meet regularly, are connected to each other and act as an organized body.

In Turkey, the Gray Wolves are organized as the youth branches of the far-right Nationalist Movement Party (MHP), called the Idealist Hearths. The MHP has been a staunch political ally of Erdogan’s Justice and Development Party (AKP) in recent years. Mehmet Ali Agca, who shot and wounded Pope John Paul II in 1981, is perhaps the most notorious of the Gray Wolves internationally. The movement has various avatars in Europe, such as the umbrella group called the Federation of Democratic Idealist Turkish Associations in France. Its members are active mostly in Lyon, Dijon, Strasbourg and Grenoble. They have a mosque as well.

Following the French ban, Sevim Dagdelen — a German parliament member of the Left Party — called for outlawing a similar umbrella body in Germany that brings together about 170 associations. Dagdelen, the daughter of Kurdish migrants from Turkey, described the group as “an enemy of the constitution” that targets Kurds, Armenians, Alevis, Greeks and Jews. Green Party lawmaker Cem Ozdemir, also of Turkish descent, said his party, too, would press for such a ban.

The Gray Wolves have come under growing scrutiny in Germany in recent years. The Federal Agency for Civic Education noted in 2017 they had outgrown the neo-Nazis as the largest far-right group in the country. In a 2019 report by the Office for the Protection of the Constitution, the Union of Turkish-Islamic Culture Associations in Europe — founded by MHP splinters — figured in a section about “extremist efforts of foreigners posing a threat to security.”

European concerns over Turkish groups have grown not only because they function as Ankara’s influence arms, but also because of their alleged links to Turkish intelligence.

The German government’s replies to parliamentary questions on the issue show that it sees Turkey’s National Intelligence Organization as an attendant of AKP policies. Turkish intelligence activities in Europe have grown since the 2016 failed coup attempt, which triggered a flight of political asylum seekers to Germany and other countries. Turkish ultranationalists in Germany moved closer to the AKP in the process, according to the German government. In 2018, German authorities reported that organizations such as the Turkish-Islamic Union of Religious Affairs (DITIB) — a branch of the Turkish government’s religious affairs agency, Diyanet — were being used for intelligence activities.

In its early years in power, the AKP had little influence over Turkish ultranationalists in Europe, while rallying support via mosques controlled by DITIB and the religious-political National Vision movement, from which the AKP itself sprang. Things changed after the AKP joined forces with the MHP, shifting to a nationalist platform hostile to the Kurds. This spawned a new, both ultranationalist and pro-Erdogan blend among Turkish migrants in Europe. Simultaneously, the AKP cultivated closer bonds with Turkish associations in Europe. Many of those associations, including the Council for Justice, Equality and Peace (COJEP) in France, became the AKP’s “emissaries” in Europe, a mission that involves countering Kurds sympathetic to the Kurdistan Workers Party (PKK), the outlawed, armed group that has fought Ankara for nearly four decades, as well as leftist Turks. To further increase its influence, the AKP encouraged Turks to create political parties such as the Equality and Justice Party (PEJ) in France.

Amid rows with Europe, Erdogan signaled he would not shy away from turning those groups into intimidation tools. In June, Turkish ultranationalists descended on a gathering of Kurdish women in Vienna, Austria, sparking clashes that kept the police busy for three days. The Austrian government believes the Turkish state had a hand in agitating the nationalists. Austria has been rather cautious in its dealings with Erdogan, but according to an Austrian official who spoke to Al-Monitor, Austrian authorities are wary of escalations akin to the 2013 slaying of three PKK-linked women in Paris. Their worries were reinforced in September when a Turkish national turned himself in, claiming he was ordered by Turkish intelligence to carry out assassinations in Austria.

In France, a young Turkish man, Ahmet Cetin, is a case in point of how the Gray Wolves and AKP-linked groups have become intertwined. Cetin was among the organizers of the recent demonstrations in Lyon, and his name was mentioned in the decree banning the Gray Wolves. In 2017, he contested the elections on the PEJ ticket. On Nov. 5, he was given a suspended four-month sentence for inciting hatred in a video he had posted on social media. “I’m a Turkish commando. Let the Turkish government give me 2,000 euros per month and a gun, and I will do whatever is needed anywhere in France,” he said in the video.

Meanwhile, COJEP chair Ali Gedikoglu remains on trial in France on similar charges. Amid the recent tensions, COJEP announced Nov. 2 it had shut down all its local associations except the Strasbourg-based COJEP International.

According to Samim Akgonul, director of Turkish studies at the University of Strasbourg, the majority of Turks in France see Erdogan as a hero defending Turkish honor, and many Erdogan supporters involved in associations and mosques are “more royalist than the king.” Some 65% of Turkish voters in France back the AKP, he told Al-Monitor.

As for Erdogan’s new ultranationalist supporters, they are mostly second-generation Turks born in France who “see Erdogan as the leader of the Turkish-Islamic synthesis,” the academic said.

Akgonul believes Erdogan is unlikely to further escalate tensions with France, as economic interests will prevail.

Yet France’s decision to stop accepting imams from Turkey is ill-advised, the academic stressed. “Turkey has been hedging Turkish Muslims very well. It has a control mechanism over them, with one leg being Diyanet and the other the National Vision. Radicalization begins when they leave the [Turkish-controlled] mosques,” he explained. Contrary to what French far-right opposition leader Marine Le Pen says, radicalization is not prevalent in such mosques and associations, Akgonul argued. “It’s the isolated lone wolves who join the Islamic State and al-Qaeda,” he said.

Akgonul believes the existing political climate will be mutually harmful. “The Turkish community in France has yet to achieve legitimacy for its presence. People are still being told, ‘Go home if you are not happy.’ Anything they do is confined to their Turkishness, and they, too, are readily confining themselves to Turkishness. This is dangerous for both the Turks and France,” he said.

Still, Erdogan bets on the European street. When German police searched a mosque as part of a fraud investigation last month, Erdogan portrayed the move as an act of racism and Islamophobia — an example of how he is shaping the perceptions of Turks. His French counterpart, Emmanuel Macron, meanwhile, sees halal slaughterhouses and halal food shops as “Islamic separatism” and wants to eliminate the alleged danger of “parallel order” or “counter society” it presents. His policy will obviously open rifts, and the French are irked by the prospect of Erdogan being a conflict catalyst in the process.