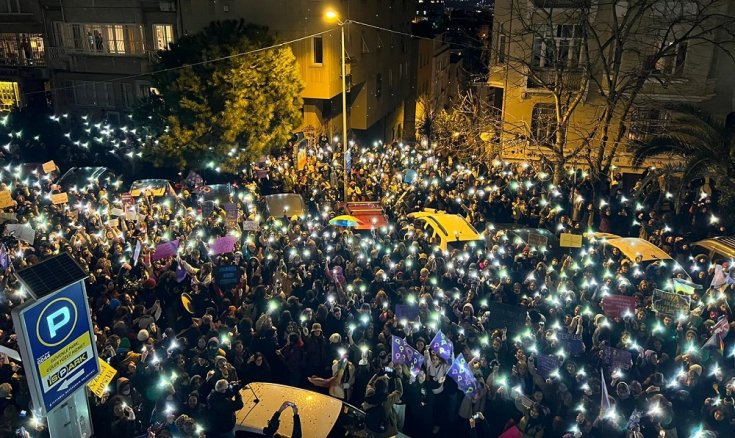 « Crowds gathered in central Istanbul to mark International Women’s Day on March 8 despite a ban. Police used pepper spray on protestors and blocked all streets leading to Taksim Square, where the march was planned to begin » says Nihan Kalle in Duvar English.

Police barricades set up across the city’s main square barred women from entering the area where a feminist march was planned to begin.

There was heavy police presence throughout İstiklal Avenue – on which women would march every year before the rally was banned – and the side streets leading to the avenue, making it impossible for women to enter the area.

The Istanbul Governor’s Office had said a day earlier that it banned marches, protests and press statements to mark the event around Taksim Square.

A throng of protestors, unable to walk to Taksim, descended on Karaköy, a few kilometers from the square, jamming traffic and chanting, “Barricades for the murderers, not women.”

Riot police used pepper spray on the protestors there.

Elsewhere in Beyoğlu, women whistled, sang, and set off flares, chanting, “We are not scared, we do not bow down.”

Burçin Güler, 21, has attended the feminist march every year since she was in high school. She said she goes to the march because she wants change.

“Every night, when I go out with friends, I think to myself whether someone will harass me tonight,” Güler told Duvar English.

“I want to live in this country, but I cannot,” she said.

The march this year was held as Turkey suffers severe economic woes. Tuğgen, a protestor, said she thinks the reason behind the heavy police presence is that protests, if not quelled, could morph into larger demonstrations against the government as it battles high inflation.

Women largely protested and chanted against femicide and violence against women, as 418 women were murdered by violent men in 2021 and 73 so far this year, according to Anıt Sayaç, a digital database that records femicide.

“Women are resisting in all areas of life,” Ayşe, another protestor, said. “And we will tear this blockade down.”