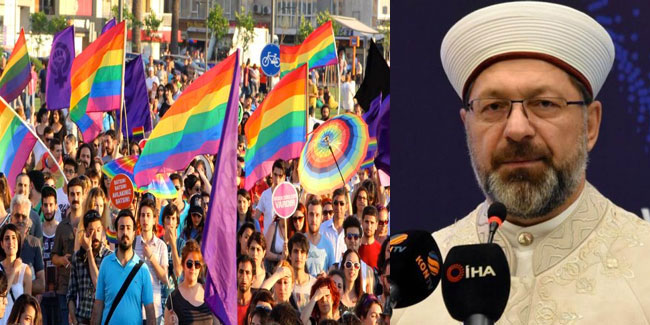 Ali Erbaş, the head of the Diyanet (Religious Affairs) commented on homosexuality on the last Friday sermon on the first day of Ramadan and invited the community “Let’s work together to protect people from such evil.” The evil was homosexuality.

The Ankara Bar Association and the Human Rights Association responded by filing a criminal complaint against Erbaş, accusing him of hate speech. The bar association also accused Erbaş of not doing enough to tackle the abuse of children and feeding a hostile environment towards women and LGBT people. It said no one should be surprised if Erbaş were to incite men to burn women like witches.

Erdoğan accused the bar of attacking Islam and “glorifying perversion in the name of equality,” saying that comments by the Ankara lawyers were “a reflection of the swamp of hate we face,” and “the most primitive version of fascism.”

And after that Turkish prosecutors have launched an investigation into the Ankara Bar Association.

The spokesperson of the AKP, Ömer Çelik, found the Bar’s declaration “fascist” and “aggressive” trying to prevent Erbaş from speaking openly according to his value system he believed.

Commenting on these latest developments Ergun Babahan said “it shows that Turkey is in the grip of a fanatic Islamic-fascist regime” via online newspaper Ahval on April 27.

Babahan reminded the words of Erbaş from Holy Quran cursing of the people of Lut: “O people. Islam accepts adultery from the greatest haram. He curses Lutism and homosexuality. What is the wisdom of it? It is the wisdom of bringing illnesses together and refuting the generation. Hundreds of thousands of people per year are exposed to the HIV virus caused by this great illicit, which is the name of the illegitimate and unmarried life in Islamic literature. Let us fight together to protect people from such evil.”

He commented that “it is an absurd attitude that the head of the Diyanet conveys the message of the seventh century Arab society to Anatolia in 2020 by freezing the time and without bringing a contemporary interpretation.” And he continued “the spirit of time requires every rational person opposes such a discourse that marginalizes a certain segment of the society”. Following these comments, he stated that, in modern times, such a discourse is labeled as a hate speech at least and the owner of such words becomes the addressee of a legal process.

For Babahan, if every verse in the Qur’an is carried to today’s conditions, then it should be better to think twice and not to forget the following verse:

“O believers! Do not make Jews and Christians friends. Because they are friends of each other (they take each other’s side). Your friends keep them inside, they are made of. Surely Allah does not guide the community of wrongdoers.”

Then, are we going to say that he violated the basic provision of the Qur’an, if a Muslim calls the President of United States “My brother Trump”? For him, “of course not” because it is known that this verse is the product of a time when the Prophet Mohammed was at war with the Christian and Jewish groups, and it is clear that it has no meaning in today’s conditions.

Babahan states that President Erdoğan, by profiting the coronavirus conditions, continues to try to shape the Turkish society in the direction he prefers. In his mind, there is no place for homosexuals and those who live together without marriage. For him, showing a lifestyle as the reason of global pandemic is a hate speech and worse, it is an indication that these people’s lives will be hell in the following days in Turkey. This shows that how Islam, in Turkey and in general, is disconnected from modernity and how Islam became one of the most powerful state apparatus along with the jurisdiction and security system.

He questions why Diyanet have gay and women’s issues in its agenda but there are no environmental problems, no corruption problem, no rationality problem. It teaches to obey, to create enemies, not to question. The religion held by this state teaches you not to question, but to obey, to take enemies.

For him a painful period is waiting for Turkey and he underlines the fact that “of course, I do not know what the exact result will be, but I am sure that one of the consequences will be a record increase in the number of people cooling from religion.”