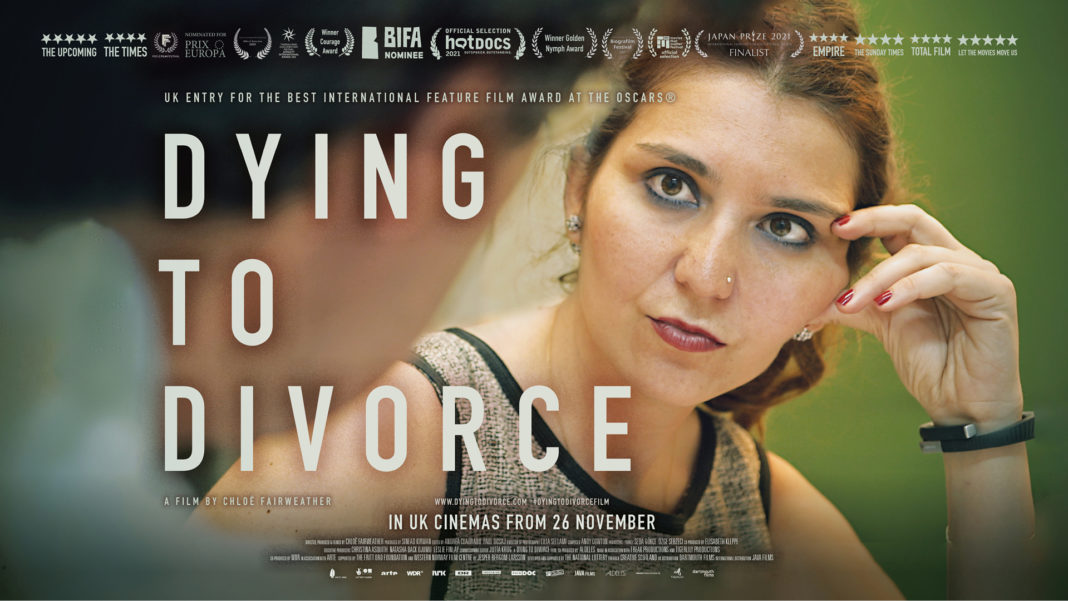 « Two British film-makers have shone a light on a campaigning lawyer and her clients in an expose of misogyny and dangerous politics » reports Vanessa Thorpe in Guardian.

nce, not that long ago, Kubra and Arzu were healthy young Turkish mothers, looking forward to raising their children. Today, sadly, this is no longer all these charismatic, determined women have in common. They are now both among the many damaged survivors of violent attacks at the hands of husbands who believed it was their right to inflict potentially lethal injury on their wives.

This autumn, the two mothers are the impressive stars of Dying to Divorce, a British-made documentary, out last week, that has just been selected to represent Britain at the Oscars as the official entry in the Best International Feature Film category. The film is a startling, sensitively made exposé of the murderous misogyny and dangerous politics behind an epidemic of femicide in Turkey, a country where an astonishing one in three women is subjected to some form of domestic violence.

Dying to Divorce was released to coincide with “16 Days of Activism”, the United Nations campaign against gender violence, and it was made over five long years of care and commitment by director Chloe Fairweather and her friend and producer, Sinead Kirwan.

The pair, who met at university in Bristol, joined together to make the documentary after Fairweather met Arzu when she was filming another project in Turkey. Since then, she and Kirwan have conquered a series of challenges, including repeated battles for funds and lengthy delays imposed by a glacial Turkish legal system. “There were lots of times I felt it was not going to be possible to finish the film,” admitted Fairweather, “but that was the good thing about having Sinead there. If one of us was down, the other was offering encouragement. I’m so pleased it’s been chosen as an Academy Award contender by Bafta, partly because, although it is such an important story, it would have been very risky for it to be made inside Turkey by film-makers there.”

At the heart of Fairweather’s documentary is the work of Ipek Bozkurt, the campaigning Turkish lawyer and activist who has guided both Kubra and Arzu, along with many others, through the painful aftermath of appalling injuries, helping them courageously press charges against their husbands.

Bozkurt is in Britain this weekend for the premiere, and she told the Observer she remains determined to fight back against prejudices in the Turkish criminal justice system, working alongside her comrades on the anti-femicide platform she has established with other Turkish lawyers as a support for survivors and victims’ families across the country.

“It is amazing how quickly things have changed in Turkey,” Bozkurt said. “There is nothing over-dramatic in the way Chloe tells these stories. There is real restraint, but the injuries speak for themselves.”

Kubra had been working for Bloomberg News in London as a television presenter when she met her husband Neptun, who was then working as a producer. At first, her relatives in Turkey, where they returned to live, celebrated the match. Then, two days after the birth of her daughter, her husband viciously hit the back of her head four times during an argument. She suffered a serious haemorrhage which initially left her unable to speak or walk. Her husband claimed her debilitating brain damage was the result of the Caesarian section operation his wife had recently undergone, and nothing to do with the evident trauma to her skull.

Deprived permanently of controlled movement and, perhaps most cruelly, of the easy articulacy that had marked her out in her career, it has taken years for Kubra to win the right to see her own daughter again and longer still to get a semblance of justice in the courts. Even now, although her husband has been convicted of the attack, he has not served time in prison. “The unfairness, and the contrast, between the way Kubra’s life was before, and how she is now, and what she has to do to be able to testify in person in court is extraordinary,” said Bozkurt.

Arzu’s story is possibly still more shocking. It is certainly revealing of the cultural environment that gives Turkish husbands what Bozkurt calls “effective impunity” for whatever violence they see fit to mete out to their wives.

At 14, Arzu was married off by her father to a farmer 10 years her senior. She had children before tensions in the relationship became his excuse for a terrible crime. When Arzu asked for a divorce, he fired seven shotgun shells at close range into her legs and arms. Although, as Fairweather’s film recounts, she begged him not to shoot her arms so that she could still look after their children, he ignored her. Speaking from a prison telephone as he awaits trial, her husband explains he sees his actions as the inevitable consequence of his wife’s behaviour.

For Bozkurt, “the personal is political”, and in Turkey the link is pretty direct. The film shows her campaigning against legal changes introduced by Turkey’s autocratic president Recep Tayyip Erdoğan and features recent news footage of a political rally in which traditional Turkish cultural ideals about the sanctity of mothers are used to imply that all women should stay at home.

The film has already been praised at European film festivals, receiving multiple nominations and prizes. But in Istanbul, where a prestigious film festival is staged every year, the Turkish programmers decided the film was too provocative to screen, said Bozkurt.

But there is hope, she maintained. And it lies not only in the way Fairweather’s film is now highlighting the issue but also in the reactions of an unexpected group of women: Turkey’s traditional, or “scarved”, women. Bozkurt believes many are now also becoming disillusioned by the restrictions placed on their lives and the low status imposed by the current regime.

"Two district governor’s offices in Istanbul have banned all LGBTI+ Pride Week events, scrapping what would have marked the 30th anniversary of the celebrations...
Read more