E-book: The voices of those who lost their loved ones: 1 May ’77 and impunity 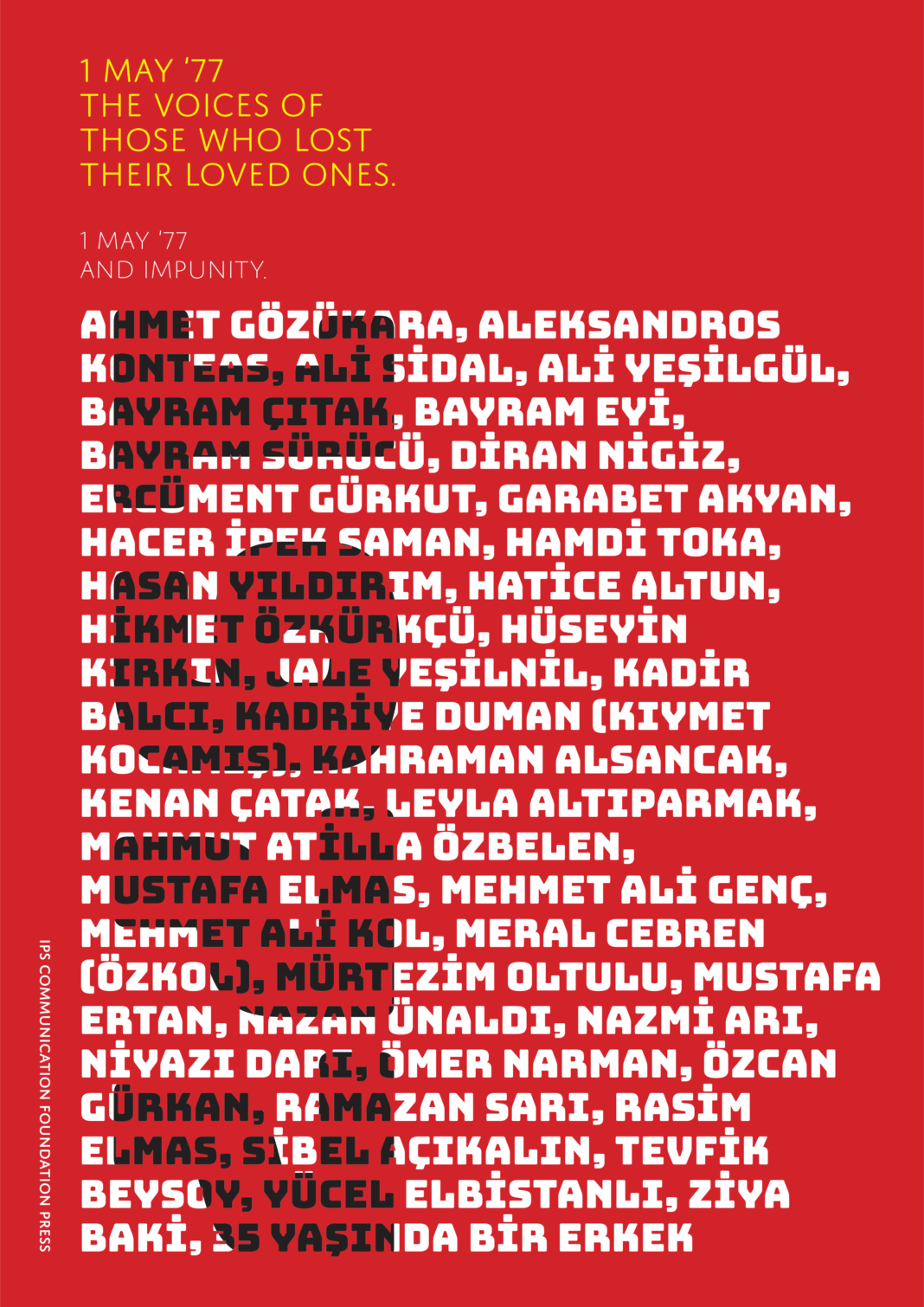 Published by bianet as an e-book as well, the series of « The Voices of Those Who Lost Their Loved Ones/ 1 May ‘77 and Impunity » is now preparing to reach out to its English-speaking audience, starting from May 1st, 2021.

The International Workers’ Day celebrations of May 1st, 1977 have gone down in Turkey’s history as the « Bloody First of May ». On this day in İstanbul’s Taksim, dozens of people lost their lives.

The information about the number and names of those who lost their lives in the massacre differs. According to the autopsy report, 34 people died in the incident, the identity of one person is uncertain.

According to a report released in 2009 by Fahrettin Engin Erdoğan, the then head of the Media, Press and Public Relations Unit of the Confederation of Progressive Trade Unions of Turkey (DİSK), a total of 41 people lost their lives. Erdoğan reached this conclusion by comparing DİSK’s records with the information in the public prosecutor’s indictment on the massacre.

44 years have passed since May 1st, 1977; however, the ones responsible for the massacre have still not been found and the perpetrators have not been penalized. The wounds of those who lost their loved ones on May 1st, 1977 have not healed, their pain has not diminished, either.

It was within this context that bianet began this project so that the ones who died on May 1st, 1977 would be more than just a number, so that everyone would learn, know and remember their unheard stories.

With this objective in mind, in seven months and 20 days, Tuğçe Yılmaz reached out to their spouses, children, siblings and friends.

All in all, it was on April 6, 2021, when the interviews, along with articles of the witnesses, educators and legal professionals, were published as an e-book, both in Turkish and English. The work is titled « 1 May ’77: The voices of those who lost their loved ones/ 1 May ’77 and impunity ».

At an event organized by the DİSK ahead of this year’s May Day, Tuğçe Yılmaz shared information about the preparation phase and content of the book. DİSK Chair Arzu Çerkezoğlu also granted an award to Nadire Mater, the Chair of IPS Communication Foundation and bianet Project Advisor, Sami Evren, who contributed to the book, and Tuğçe Yılmaz.

However, it is important to note that this is not a completed work, there are still those bianet has been unable to reach out to.

Accordingly, with a particular emphasis on impunity following the massacre, bianet English will now publish the stories titled « Voices of Those Who Lost Their Loved Ones » by Tuğçe Yılmaz and the articles of « 1 May ‘1977 and Impunity » as a series, starting from May 1st, 2021.

On the first day, you will read the story of film industry worker Rasim Elmas, who died in Taksim at the age of 41, accompanied by the « Political panorama of Turkey – 1977 », an article written by Sami Evren, providing a general picture about the background and the aftermath of May 1st, 1977.

We will continue to share stories and articles in the following weekdays, reiterating, « As we know, impunity makes people daring, for the record. »