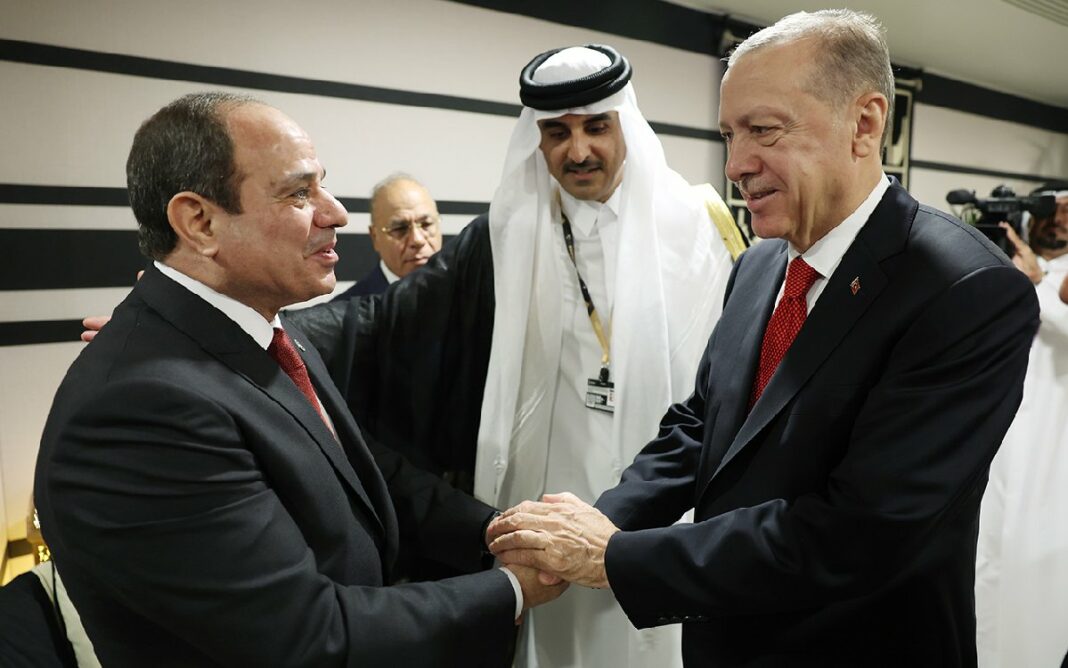 Many see the move as the penultimate nail in the coffin of Erdogan’s Islamist foreign policy in the Middle East.

The final nail will be the meeting he is reportedly seeking with Syrian President Bashar al-Assad, his one time archenemy.

During the Arab Spring in 2010 and 2011, Erdogan believed that the disgruntled Arab masses would bring the Muslim Brotherhood and its affiliates to power across the region and elevate him to the level of a key regional Islamic leader.

However, he misjudged the degree to which established Arab regimes viewed his approach with antipathy. Most Arab leaders have felt threatened by Erdogan’s brand of political Islam.

The Arab Spring failed to produce what Erdogan wanted. He now needs the support of these regimes to extricate Turkey from the economic morass his unorthodox policies have landed it in.

The move has gained added importance with presidential elections only six months ahead and followed by reconciliation with the United Arab Emirates (UAE), after a decade of acrimonious exchanges and patching up his differences with Saudi Crown Prince Mohammed bin Salman. In order to facilitate the Saudi rapprochement, he stopped championing the cause of Saudi journalist Jamal Khashoggi who was murdered in the Saudi Consulate in Istanbul in October 2018.

Despite historic links, relations between Turkey and Egypt plummeted after Mohammed Morsi, the democratically elected Egyptian president, was toppled in 2013 by Sisi, who headed the military at the time.

Erdogan vowed not to forgive Sisi for ousting Morsi and shutting down his Muslim Brotherhood based government.

“There are those who want to reconcile me with Sisi. I reject this,” Erdogan said in an address in March 2019. “I refuse to meet with an antidemocratic person who condemned Morsi and his friends to prison,” he added.

However, as the balance of power in the eastern Mediterranean turned against Turkey to Greece’s advantage, and the cost of regional isolation increased, Erdogan was forced to change tack.

Aware of Turkey’s geostrategic importance and the investment opportunities it provides, Saudi Arabia and the UAE also responded positively to Erdogan’s outreach.

High-level contacts and state visits between Turkey and the UAE and Turkey and Saudi Arabia have been exchanged and multiple cooperation agreements signed.

Reuters reported this week that Riyadh is to put a $5 billion deposit at Turkey’s central bank.

This is good news for cash-strapped Ankara and will help Erdogan convince his supporters that good ties with formerly estranged Arab regimes is the right way to go. Meanwhile, Qatar and the UAE have also been putting billions into Turkey.

Statements issued by Ankara and Cairo after the clasping of hands in Doha indicated that the sides were on the cusp of a new era in ties.

Erdogan was also happy with this turn of events. “We gave our go-ahead for this [reconciliation] process to begin. We took a step [in Doha] for it to start. My hope is that … we can carry it now to a good point,” Erdogan told reporters as he flew home from Qatar.

Talking to young party supporters in Konya Nov. 28 Erdogan said information reaching him indicated that Sisi was also extremely pleased with their meeting which was arranged by the Emir of Qatar Tamim bin Hamad Al Thani.

“After this we can enter such a road with Syria also the way we did with Egypt” Erdogan said adding “that there was no place for lasting quarrels in politics.”

Erdogan’s about-face on Sisi was immediately lambasted by opposition parties and his critics in Turkey. Most approved of this reconciliation as being a rational move but argued that it had come belatedly.

In the meantime, Turkey had lost regional influence and saw its economy harmed, they said. The time wasted also resulted in key Arab states deepening ties with Turkey’s rivals Greece and Cyprus in order to counterbalance Erdogan’s regional ambitions.

Veteran columnist Fehmi Koru, who stood close to Erdogan once, believes that while it was appropriate for Ankara to criticize the coup that toppled Morsi, “it went overboard.”

Underestimating Egypt came at a high cost to Turkey, Koru argued. “The most important foreign policy mistake of the past decade in the region resulted in alliances emerging that were unforeseen by Turkey. Our traditional friends became enemies, while our traditional enemies became friends,” Koru wrote on his personal webpage.

Osman Sert, who served as press secretary to former Prime Minister Ahmet Davutoglu, said it was unnatural for two key regional countries such as Turkey and Egypt to be estranged.

Supporting the Erdogan-Sisi meeting, Sert, nevertheless, underlined that this provided a fine example of Erdogan’s inconsistencies. “Continually saying things that you won’t or can’t do and then going on to do the opposite is not politics. To the contrary, this is a lack of politics,” Sert wrote in his column in Karar daily

Not all of Erdogan’s grassroots supporters are pleased with the reconciliation in Doha.

Aware that the main losers will be the Muslim Brotherhood and its offshoots, Turkey’s Islamist quarters are disgruntled. Ali Karahasanoglu, the firebrand editor of the pro-government daily Yeni Akit, reflected their disappointment. “I was devastated when I saw that picture. I was devastated in the name of all Muslims. … I was saddened and devastated to see Erdogan abandon his struggle of the past nine years,” Karahasanoglu wrote.

Strong views such as these have prompted Erdogan’s acolytes to try and avert a backlash from his traditional support base in the lead-up to the elections.

They argue that meeting Sisi and Assad will serve Turkey’s interests and help Ankara stabilize the economy as well as solving the problem of Syrian refugees.

There are still differences between Ankara and Cairo to be overcome. The questions of Libya and of hydrocarbons exploration rights in the eastern Mediterranean are two key examples.

Nevertheless, both sides hope the Erdogan-Sisi handshake will provide a better environment for these matters to be discussed more productively.