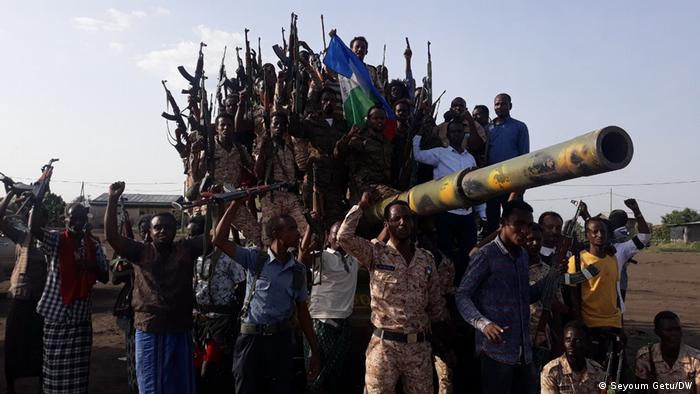 « Ethiopia’s government has forged an alliance with Turkey amid reports that it wants to deploy armed Turkish drones in its bitter war against forces from the Tigray region » reports the Guardian.

The details of the agreement have not been published, but officials told Reuters in October that Ethiopia had requested Turkey’s Bayraktar TB2 drones, considered to be the most effective munitions of their type in the world.

Abiy’s trip came two months after Ethiopian forces had been expelled from Tigray’s capital, Mekelle, and before an October air and ground counter-offensive, which appears to have been rapidly pushed back.

Alex de Waal, the director of the World Peace Foundation at Tufts University, said: “The fighting is already at an intense scale and ferocity, with perhaps 100,000 soldiers already dead on the Ethiopian side. Five million civilians are in need of food aid as a result of the conflict, and yet [Ethiopia] is still shopping for drones and other arms.”

TB2 drones have become sought-after across Africa, Asia and parts of Europe after the remotely piloted craft were deemed to have tipped the balance in favour of Azerbaijan in its war with Armenia last autumn over the disputed enclave of Nagorno-Karabakh.

Ethiopia’s government is already believed to have deployed drones made in Iran and China. But neither are considered as effective as Turkey’s TB2s, made by Baykar Makina, a company whose chief technology officer, Selçuk Bayraktar, is married to Erdoğan’s younger daughter.

Neither government has publicly commented on the sale of drones but there is already evidence to suggest Turkish munitions are in use: a fragment of a Turkish-made laser-guided bomb found by Tigrayan forces was passed to a journalist and analyst, Martin Plaut, early last month.

It cannot be conclusively determined from where it was fired, but western experts say the missile from which the fragment came can be used by TB2 drones.

TB2 drones were initially used by Ankara against Kurdish separatists inside its own country and neighbouring Syria and Iraq. Since then they have also been deployed on behalf of the internationally recognised Libyan government in Tripoli to stave off an offensive by the eastern-based commander Khalifa Haftar.

They cost about $1m to $2m a time – a tenth or less of the price of the higher specification US Protector drone, which Washington has only been willing to sell to a handful of countries. An increasingly assertive Ankara has rapidly stepped up exports, and last week Kyrgyzstan became the latest country to put in an order.

The rapid spread of Turkey’s drone technology, and the authoritarian nature of some of the buyers, alarms some commentators. “What we are seeing is the consequences of the international community not wanting to deal with drone proliferation,” said Chris Coles, from Drone Wars, a UK-based NGO.

“Drones are heating up conflicts in the region because pilotless munitions lower the threshold for war. A country might be condemned for supplying boots on the ground to intervene in a conflict, but there is far less complaint if instead they are supplying drones.”

Thousands – possibly as many as 30,000, according to De Waal – of young, poorly trained and poorly armed Ethiopian soldiers are believed to have been killed since the start of the government’s October offensive.

Mekelle has been targeted with a series of government airstrikes in recent days, with civilians often the victims. Six people, three of them children, were killed in a strike last week, according to reports from the ground, and at least 27 others were wounded.

Accurate information about the conflict and its impact is hard to obtain, partly because very few journalists and humanitarian agencies are operating on the ground. Tigray remains subject to a blockade, with the UN complaining in August that only 10% of aid supplies were able to get through.

On Wednesday the most comprehensive report yet into the conflict, a joint investigation by the UN and the country’s human rights commission, concluded that all sides in the conflict may have committed war crimes and other crimes against humanity.