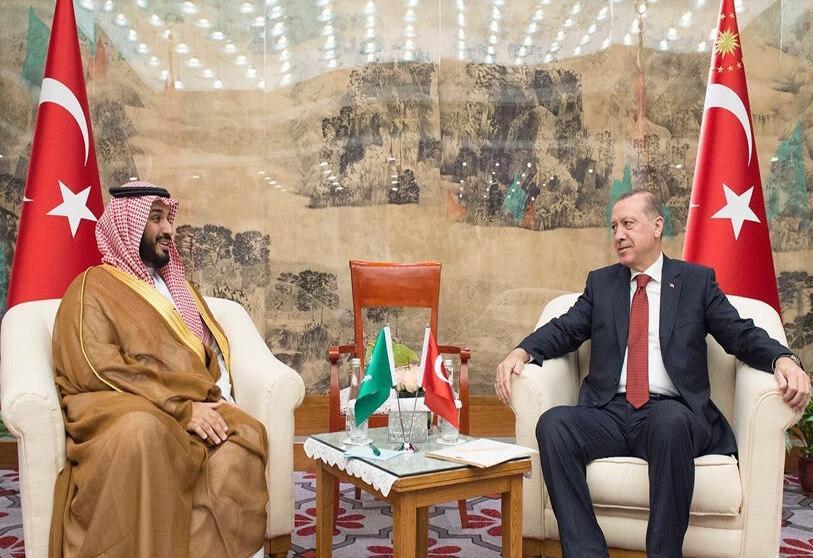 « Following normalization with the UAE in November, Erdogan plans to pursue reconciliation with Saudi Arabia next month, pressed by financial woes at home, as both sides appear ready to leave the Khashoggi affair behind » says Fehim Taştekin in Al-Monitor.

Turkish President Recep Tayyip Erdogan is gearing up for a fence-mending visit to Saudi Arabia next month, hoping for financial benefits above all as simmering economic woes threaten his political fortunes at home. Erdogan’s trip to the kingdom would be another milestone in Ankara’s quest to reconcile with Arab heavyweights, following normalization with the United Arab Emirates (UAE) and overtures with Egypt after years of rivalry.

Erdogan’s plan for a February visit to Riyadh became public knowledge shortly after Ibrahim Kalin, a senior presidential aide, asserted that Ankara would “accelerate normalization steps” in the region this year. Erdogan blurted the planned visit as he left a gathering of Turkish exporters Jan. 3 after a businesswoman asked him to resolve trade hitches with Saudi Arabia. “He is expecting me in February,” Erdogan said, without naming his contact.

Was it King Salman or Crown Prince Mohammed Bin Salman, the kingdom’s de facto ruler? Officially, the king is supposed to be the president’s interlocutor, but normalization will require reconciliation with the crown prince, whom Turkey has held responsible for the 2018 murder of dissident journalist Jamal Khashoggi in the Saudi consulate in Istanbul. The gruesome killing fueled bilateral tensions, which were already on the rise over Turkey’s support for Qatar, hit by a Saudi-led blockade the previous years. While Erdogan shook his finger at the crown prince, he still called on King Salman on Muslim holidays to extend congratulations and courtesy.

Erdogan and his cohorts say bilateral ties soured because of the policies of the crown prince, widely referred to as MbS, which, in turn, were influenced by Abu Dhabi Crown Prince Muhammed bin Zayed, whom Ankara accused of financing the failed coup attempt against Erdogan in 2016. Khashoggi’s murder came as an opportunity for Erdogan to discredit MbS. He blamed the murder on the crown prince without openly naming him, as Ankara leaked information to local and international media that targeted MbS. Ankara hoped the international clamor over the killing would block the crown prince’s path to the throne, but to no avail. The government-controlled Turkish media, which vilified MbS as “Abu Minshar” — translated roughly as “master of the saw” — until recently, are now busy explaining why a brotherly embrace with the Saudis is a must.

The Turkish foreign minister’s trip to Riyadh in May and the Saudi trade minister’s November meeting with the Turkish vice president in Istanbul had already raised anticipation of a meeting between the leaders. Erdogan reportedly sought to meet with MbS during his trip to Doha last month, but was told that the itinerary of the crown prince did not align with his program.

Erdogan is expected to pay a return visit to the Emirates Feb. 14, which offers an opportunity to add a Riyadh leg. The Abu Dhabi crown prince held reconciliation talks in Ankara in November, which, according to a Turkish official, prompted the Saudis to follow suit. “The Saudis felt like they have been getting excluded in this regional reconciliation. They would like to be a part of it,” the official told the Middle East Eye.

Indeed, Muhammed bin Zayed’s trip to Ankara as well as the UAE’s promise for $10 billion in investments in Turkey and reported interest in Turkish drones might have egged the Saudis on, just as the Saudis’ direct talks with Iran might have spurred the Emirates to seek rapprochement with Tehran. And for MbS, inviting Erdogan to Riyadh rather than squeezing in a meeting in Doha might be a way of making amends for the Khashoggi affair.

Yet, Ankara has not lost its propensity to barge into geopolitical vacuums with hard power, since international interest in Turkish military products is on the rise. As Kalin puts it, “Regional problems and crises appear bound to continue. But at the same time, Turkey’s capabilities to intervene in such crises, using both soft and hard power, are increasing by the day. … Turkey will continue to strengthen its regional and global alliances, while enhancing its national capabilities, based on a preemptive foreign policy perspective.”

That’s definitely not what Egypt, the UAE and Saudi Arabia expect from fence-mending with Turkey. They expect Turkey to curb its “interventionist” foreign policy in return for greater economic cooperation. Ankara’s failure to deliver on those expectations is why its newfound dialogue with Cairo produced only two rounds of exploratory talks last year. But the Emirates and Saudi Arabia have other reasons to show flexibility. Washington’s policies — its desire to strike a deal with Iran, its limited contribution to the war in Yemen, its hasty withdrawal from Afghanistan and the perceived dilution of US security guarantees to allies — have prompted regional countries to diversify their ties with actors such as China and India, repair damaged relationships and seek to moderate disputes that threaten hostilities.

The Qatar-Gulf reconciliation in January 2021 softened the ground with Turkey as well. Furthermore, the end of the Saudi-Emirati alliance in the Yemen war reverted the two countries to their old pattern of competition, and neither of them is likely to watch from the sidelines as the other moves closer to Turkey.

From Turkey’s perspective, military operations in Syria, Libya and Iraq have not achieved the goals that Ankara hoped for. The Saudis’ help to the Syrian Kurds and the UAE’s collaboration with the Iraqi Kurds have only stoked Ankara’s fears. The most pressing factor, however, is Turkey’s deepening economic turmoil. Faced with sagging poll numbers, Erdogan needs badly to lure foreign investments and boost trade partnerships to improve conditions ahead of elections next year.

The parties could make progress on normalization by keeping economics apart from politics. That would require mutual understanding. The Qatar-Gulf reconciliation seems to have led Ankara to believe that Doha’s neighbors have dropped their demand for the closure of the Turkish military base in Qatar. Yet objections remain to growing Turkish influence in the region. Similarly, Turkey’s efforts to acquire military bases in Libya, expand its influence in the Horn of Africa or increase its presence in the Red Sea continue to irk the Arab heavyweights.

Some of Turkey’s expectations might not materialize either, primarily the hope to erode Arab collaboration with Greece and Cyprus in gas exploration in the Eastern Mediterranean. And Ankara’s interlocutors are well aware that it seeks to restore economic ties without any concessions from its geostrategic gains in the region.

In sum, Team Erdogan’s “positive agenda” rhetoric is meant to boost Turkey’s ties with Arab countries, along with the United States and the European Union. Hopes appear high that following reconciliation with the Emirates, conditions will ripen this year for normalization with Saudi Arabia as well as Egypt and even Israel. Such optimism, however, seems to ignore the disruptive factors that remain in place.

"Turkey was forced to relocate its Ethiopian embassy to Kenya after increasing threat out of its involvement in the country’s clashes with the Tigray...
Read more