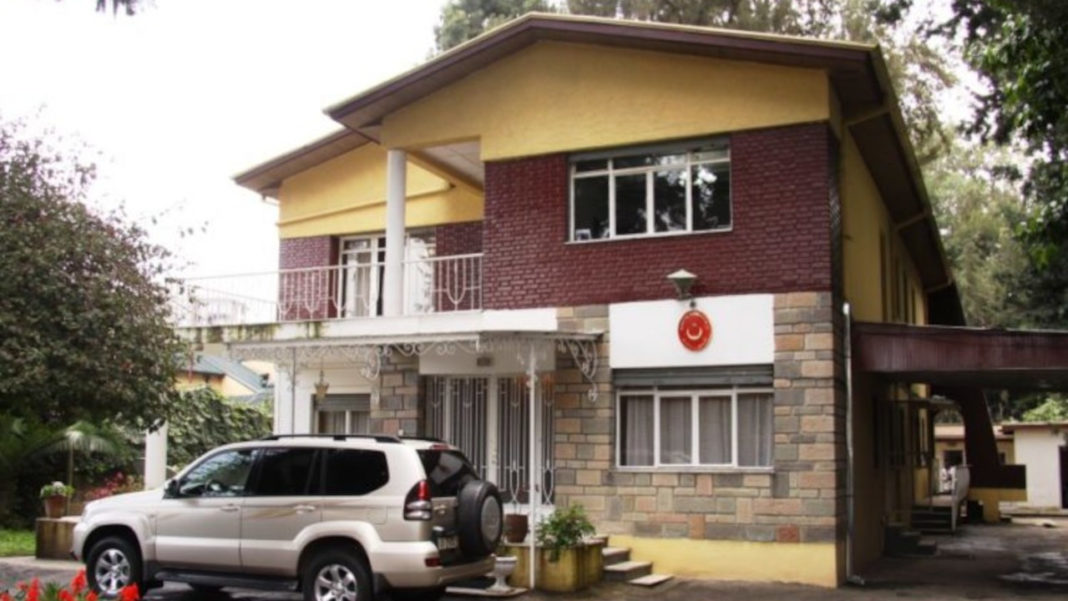 « Turkey was forced to relocate its Ethiopian embassy to Kenya after increasing threat out of its involvement in the country’s clashes with the Tigray rebels by supplying combat drones to Addis Ababa » says Fehim Taştekin in Al-Monitor.

Turkey has relocated its Ethiopian embassy to Kenya in the face of increasing threats over the role of Turkish drones in the clashes between the Ethiopian government and the Tigray rebels, proving the warnings about potential impacts of Ankara’s drones sale to foreign countries without setting restrictions.

The relocation was first reported by veteran diplomatic correspondent Barcin Yinanc. While the Turkish government remains mum, a diplomatic source, speaking to Al-Monitor on condition of anonymity, confirmed the move.

The threats to the embassy intensified by November, another source close to the government told Al-Monitor. The Turkish Foreign Ministry decided to move embassy activities to neighboring Kenya in mid-December after advanced weapons were found as near as 200 meters from the embassy compound, the source added.

Ankara’s role in clashes between the Ethiopian government and separatist Tigray rebels in the north have become controversial both in Ethiopia and the international community after Turkey sold Bayraktar TB2 armed drones to Addis Ababa.

Ethiopia obtained six of the 13 TB2 drones it had purchased from Turkey under a military cooperation deal signed between Turkey’s President Recep Tayyip Erdogan and Ethiopia’s Nobel Peace Prize laureate Prime Minister Abiy Ahmed. The Turkish drones have reportedly been used in the government forces’ repulsion of the Tigray rebels from northern Afar and Amhara regions. Tigrayans took to social media, calling on Ankara to stop the sale.

As the anger of the ethnic Tigrayans was growing, Istanbul hosted the Turkey-Africa Partnership Summit Dec. 16-18, with Erdogan seeking to sell more combat drones to the continent, ignoring the backlash.

Erdogan underscores the success of the Turkish drones –manufactured by Baykar, a company owned by the family of Erdogan’s son-in-law Selcuk Bayraktar– in every occasion in a bid to disperse the dark clouds over the country’s gripping economic woes.

“Even in Africa, they asked for drones and armed drones wherever I went,” he boasted in October during a visit to Baykar, the manufacturer of the Bayraktar. Erdogan’s remarks came just after his Africa tour to Angola, Togo and Nigeria during which marketing drones was the top agenda item.

Several factors have fueled appetite for the Turkish combat drones: Their success in the Nagorno-Karabakh, Libyan and Syrian conflicts; relatively cheaper price tags compared to their competitors; absence of any pre-conditions or human rights restrictions limiting their use; and absence of delays such as parliamentary approval.

While some hail Ankara’s growing military sales, experts, including increasing number of pro-government voices, warn that militarizing ties with African countries could complicate Ankara’s ties with the continent, dragging Turkey into the internal conflicts.

The Turkish government has simply dismissed these warnings, saying that European countries’ military hardware sales to the continent hardly spark such criticisms.

Yet Ankara can hardly avoid the criticism as Turkey’s drone sales to Ethiopia have become particularly problematic at a time when international organizations sound alarm on increasing civilian casualties from government air strikes.

« At least 108 civilians have reportedly been killed and 75 others injured since the year began as a result of air strikes allegedly carried out by the Ethiopian air force, » Liz Throssell, a spokesperson of the UN human rights office OHCHR said in a press conference in Geneva on Jan 14. Although the Ethiopian government does not officially confirm the strikes were conducted by its forces, the Tigray rebels have no air force.

Most recently, on Jan 8, an air strike on a refugee camp in the Tigray region killed 56 people, including children and aid workers, wounding 30 and unleashing international outrage. On Jan 5, an airstrike by the Ethiopian air forces hit a refugee camp in the southern Tigrayan town of Mai Tsebri, killing three Eritrean refugees, including two children.

The conflict has also landed on the radar of the Biden administration. In a phone call with Ethiopia’s premier Ahmed, President Joe Biden expressed his concerns over the airstrikes.

In addition to the civilian casualties and rampant human rights violations, the UN has also reported that more than 2 million people were displaced during the clashes and that millions were at risk of famine.

The situation prompted a rare political appeal by the Nobel Peace Prize committee. « As prime minister and peace prize laureate Abiy Ahmed has a special responsibility to end the conflict and contribute to making peace.” the committee said in a statement in early January.

The armed clashes in Ethiopia reignited in September 2020 after the government postponed the general elections due to the COVID-19 pandemic. Defying the government’s decision, rebels held regional elections in the Tigray region. The central government declared these elections illegal, and clashes started. The battle intensified after an attack on an Ethiopian military base in November 2020.

The conflict will have ramifications for the future of Turkey’s relations with Ethiopia and the broader region. The clashing parties still can find a compromise under growing international pressure, yet Ethiopia will likely remain a diplomatic and political minefield for Ankara.