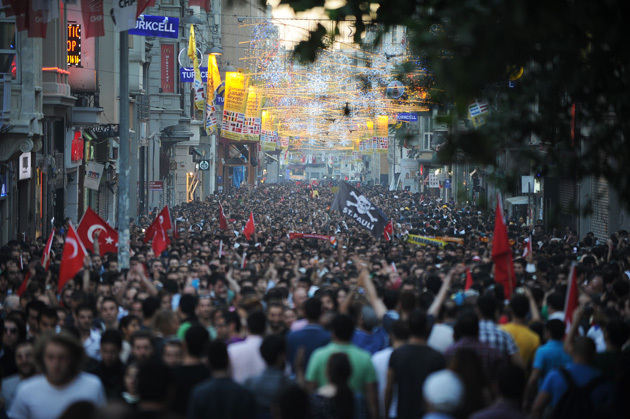 Ankara’s goal in dealing with Europe is to limit the future agenda to trade, economic matters, and refugee arrangements. In a diminishing space for civil society, academic freedom, and human rights, EU leaders are divided over what strategy to pursue with Turkey.

The past eighteen months have witnessed a worsening of Turkey’s relations with European countries—as if EU leaders didn’t know it.

The list of foreign policy divergences between Ankara and European capitals is long. They include the deployment of missile systems that are adversarial toward NATO, gas research operations in the Eastern Mediterranean under a military escort, and war operations in Azerbaijan, Libya, and Syria—not to mention a new posture on a settlement for the divided island of Cyprus. At the same time, Turkey’s rule-of-law architecture is being consistently degraded with the usual dose of conspiracy-based accusations against European countries and the United States.

Against this background, the March 25–26 European Council meeting of EU heads of state and government is supposed to look in detail at the union’s relationship with Turkey. Many leaders are hoping for a positive agenda. Others are arguing for more sanctions.

Ankara is striving to dodge punitive measures and fill the agenda with reforms that are palatable to the Europeans. Yet, domestic developments in Turkey keep pointing in the opposite direction. At this point in time, the odds are that only a limited agreement will be politically feasible for both sides.

There is no doubt that EU governments want a calmer, more predictable relationship with Ankara, be it for economic reasons (in the case of Germany, Italy, or Spain) or for fear of a new wave of refugees (see Bulgaria, Germany, Greece, and Hungary). In Ankara and Istanbul, many, like the business association TÜSİAD, realize that a hostile relationship with Turkey’s main trading and investment partner is untenable in the face of a dire economic situation, a severe drop in foreign direct investment, and an exodus from Turkey of some major European investors.

Indeed, for all the talk about a “New Turkey” and its increased military might, the hard reality is that the country is already largely integrated into Europe’s industrial and financial fabric. Turkey has few—if any—alternatives to dealing with Europe. And it certainly has no interest in a permanently hostile relationship.

Within these parameters, the issue is how to develop a positive EU-Turkey agenda, and what the price to pay will be on both sides.

This week, the Turkish leadership is due to announce political and economic reforms, but no specifics are available as yet. Europeans have heard such promises before, but what is at stake is the credibility of such pledges, especially in the realm of the rule of law, since Turkey’s list of democratic failures is long and growing by the day.

A fully autocratic system of government is now firmly in place. Work is under way to twist the country’s electoral law to preserve the current ruling alliance between the Justice and Development Party (AKP) and the Nationalist Movement Party (MHP). The Kurdish leader Selahattin Demirtaş has been in jail since 2016. His party, the Peoples’ Democratic Party (HDP), is threatened with closure.

Then there’s the assault on academic freedom and institutions. Students at Istanbul’s Boğaziçi University have been called “terrorists” for protesting against a politically appointed rector. The LGBT community has been demonized and its members accused of being foreign agents. Absurdly, the respected philanthropist Osman Kavala is charged with plotting against the state, while his cultural organization, Anadolü Kültür, is also threatened with being shut down. Kavala’s wife, Ayşe Buğra Kavala, an internationally renowned academic, is accused of being a foreign agent.

To top it off, when several Western governments and global civil society organizations commented on the events at the university, the Turkish foreign ministry issued a statement in the form of a “warning” that “no one should exceed their limits and interfere in Turkey’s internal affairs.” So much for a positive agenda with the EU.

Ankara’s goal in dealing with Europe is clearly to limit the future agenda with the EU to trade, economic matters, and refugee arrangements. Simply put, the survival of Turkey’s autocratic system of government now in place—and of the Islamist-nationalist coalition in power—rests on thwarting the remaining democratic features of Turkey’s electoral process and the functioning of society. A further deterioration is in the cards.

The EU’s perception of the situation is naturally the opposite of Turkey’s: any agreement of substance with Ankara will need to be accompanied by a measurable return to the rule of law and a confident relationship in the military domain. This is the attitude not only of politicians in the European Parliament and many national parliaments but also, increasingly, of business circles. How can the EU adopt further sanctions on Russia over the imprisonment of opposition leader Alexei Navalny, or on Belarus or Myanmar, and look the other way when it comes to Turkey? How can European businesses invest hundreds of millions of euros in the years to come if Turkey’s judiciary remains so politicized?

In the short term, the common ground for Turkey and the EU is likely to be limited to further help for Syrian refugees in Turkey and, if the underlying conditions are right, initial discussions on upgrading the EU-Turkey Customs Union.

Yet, for domestic political reasons, Ankara will want another concession—for example, a special invitation for Turkish President Recep Tayyip Erdoğan to attend a European Council meeting or some sort of summit on the Mediterranean. This will raise the difficult question of giving a blessing to Turkey’s autocratic leanings at a time when the country blatantly disregards and mocks Europe’s fundamental values.

With so many unresolved disputes with Ankara’s leadership and after a humiliating visit to Moscow in February by the EU’s foreign policy chief, Josep Borrell, EU leaders would be well advised to shelve summitry with Turkey for the time being. Instead, they should work hard and quietly on resolving the main contentious issues. Good luck to them!