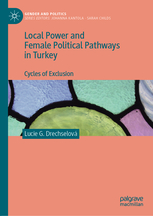 This book by Lucie G. Drechselová is published by PALGRAVE Macmillan It  “makes the case for integrating Anglo-American and French scholarly approaches to the study of women’s political representation. It shows that women’s difficulties in politics are due to discrimination in the social order and in the candidate selection process. It views political parties as gendered institutions and uncovers the gender-specific exclusionary mechanisms”

The “book explores the “Turkish paradox” – women’s lower representation in local politics than in parliament. By analyzing life stories of 200 female municipal councilors and party representatives, it offers a comprehensive assessment of what makes local politics in Turkey particularly inaccessible to women. It places women’s pathways within the cycles of exclusion, starting by political socialization, going through the candidate recruitment process and continuing after the election. The research presented here brings together gender studies and political sociology and offers novel applications of concepts including intersectionality and biographical availability. It covers all major political parties and diverse local configurations in Turkey, and reveals political strategies of women in conservative parties as well as the reasons behind the exceptionally high representation of women within the pro-Kurdish political parties. The book further sheds some light on the intricate relationship between women’s political activity and regime change in the context of democratic backsliding.”

“Lucie G. Drechselová is a researcher at the Oriental Institute of the Czech Academy of Sciences. She was previously a lecturer at the Paris Institute of Political Studies, and co-edited Kurds in Turkey: Ethnographies of Heterogeneous Experiences (with A. Çelik, 2019).