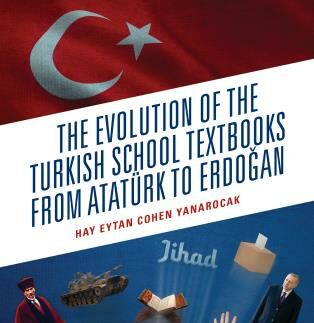 « This book narrates and analyzes a century of the Turkish education system and textbook indoctrination starting from the foundation of the Republic until today. It divides the history of Turkish education into five periods: Single party government (1923–1950), Menderes’ Democrat Party government (1950–1960), the 1960 coup generals and their successors’ governments (1960–1980), the Turkish-Islam Synthesis oriented Atatürkist governments (1980–2002) and finally the Justice and Development Party (AKP) government (2002–). By using the content analysis method, this book exposes Kemalism’s metamorphosis into « Turkish-Islam Synthesis » influenced Atatürkism. For the first time, Cohen Yanarocak analyzes the indoctrination of this post-1980 official ideology through history, religious studies, civics, and national security knowledge textbooks. It goes beyond the Atatürkist period and examines the gradual but drastic Islamization of the whole curriculum and school textbooks at the expense of Atatürkism under the AKP. In this framework, this book highlights the recent penetration of controversial concepts such as Neo-Ottomanism, Jihad, and Pan-Turkism into the current Turkish school textbooks. Certainly, the ramifications of the current textbooks will influence the lives of millions of people. Therefore, this book functions as a crucial manual to understanding the current political environment in Turkey. »