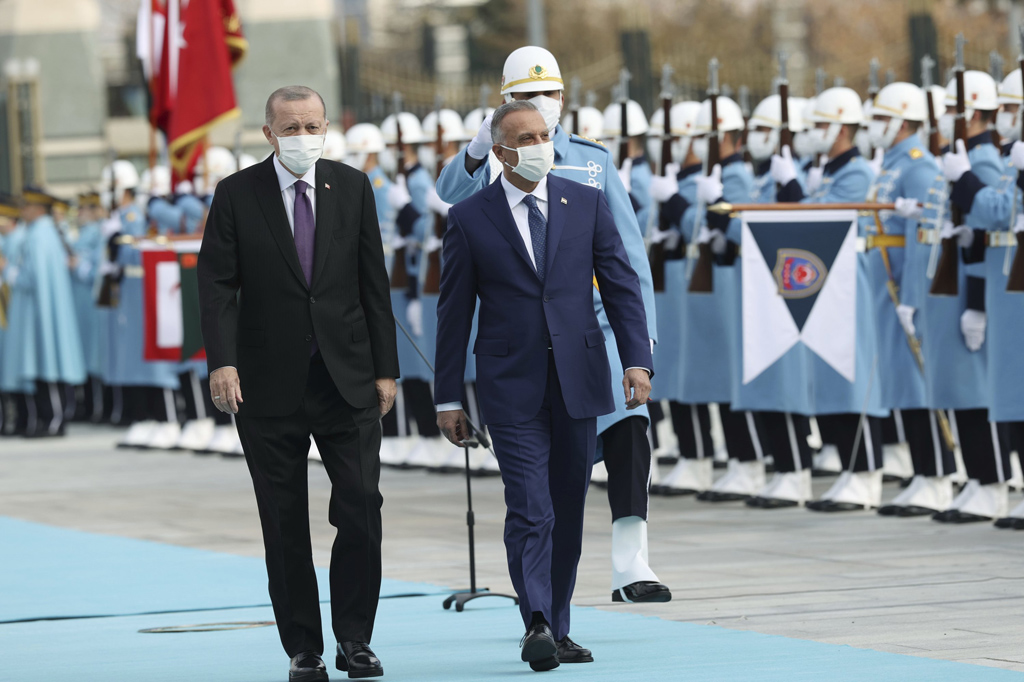 Iraqi Prime Minister Mustafa al-Kadhimi was given a special reception in Ankara last week, including a spectacular dinner complete with Iraqi music. The Dec. 17 visit, which took place after recurring bilateral tensions and no less than four invitations by Turkish President Recep Tayyip Erdogan, ended in an optimistic mood, with Turkey’s ambassador to Iraq asserting how both sides were happy with the talks. Yet the main irritant in bilateral ties — the presence of Turkish Kurd militants on Iraqi soil — remains unchanged and may even grow down the road.

During the talks, the Turkish side raised strategic projects such as a second border crossing between the two neighbors, the reopening of the oil pipeline from Kirkuk to Turkey’s Mediterranean coast, a railroad between the two countries and a highway from the Iraqi border city of Zakho to the Persian Gulf. Though Kadhimi said nothing about those projects at the joint press conference, he spoke of collaborating with Turkey in the reconstruction of Iraq.

Erdogan said the two sides agreed to sustain efforts against “common enemies” such as the Islamic State (IS) and the Kurdistan Workers Party (PKK), the armed group that has fought Ankara since 1984, using rear bases in the mountains of northern Iraq. Without naming the PKK, Kadhimi said that Baghdad would not tolerate any group threatening Turkey from Iraqi soil and pledged continued efforts against terrorist groups destabilizing the region. He cited as an example the October deal between Baghdad and Iraqi Kurdistan on the administration of Sinjar, which, Turkey hopes, would lead to the PKK’s removal from the Yazidi-populated region.

Yet the details that have emerged since the visit suggest that no real breakthrough was achieved on the main sticking points in bilateral ties. The chronic water-sharing dispute over the Euphrates and Tigris rivers remains unchanged and Turkey’s cross-border military operations against the PKK continue to strain the relationship.

According to Dahuk Gov. Ali Teter, who was part of the Iraqi delegation in Ankara, Kadhimi told his Turkish interlocutors to stop interfering in Iraqi affairs, referring to Turkey’s cross-border operations. Erdogan, he said, insisted on the PKK’s removal from Iraqi territory and pressed for a move on Makhmour, another area where the PKK holds sway, similar to the Sinjar deal between Baghdad and Erbil.

That Ankara is already pushing Baghdad on Makhmour, while the Sinjar deal has yet to bear fruit, is a sign that Turkey’s Kurdish policy could continue to complicate bilateral ties, no matter how much economic cooperation advances.

The deal on Sinjar — known as Shingal in Kurdish — called for the deployment of central government forces in the region, a new 2,500-strong Yazidi police force, an overhaul of the local administration, including an independent district governor, and the reconstruction of the region, which suffered some of the worst IS atrocities in 2014. Ankara welcomed the deal, hoping for the dissolution of the Shingal Resistance Units and the related Democratic Self-Administration Council of Shingal, which the Yazidis, left alone against the IS invasion, created with PKK support. Judging by developments on the ground, however, the deal is not producing the kind of cleansing that Ankara expects.

Fikret Igrek, a senior diaspora leader of the Shingal self-rule council, told Al-Monitor that representatives of the council and the Shingal Resistance Units told a delegation from Baghdad on Nov. 8 that the Yazidis would not accept any deal sealed without their participation. A week later, representatives of various Yazidi groups called for a solution based on self-rule in talks with officials in Baghdad. Yet, the government gave the cold shoulder to the self-rule demand as well as to Yazidi requests to keep the Shingal Resistance Units intact.

Soon, up to 8,000 Iraqi soldiers deployed along the Iraqi-Syrian border in Sinjar. On Nov. 21, Iraqi commanders asked the Shingal Resistance Units to evacuate their positions, sparking local protests. Ensuing negotiations resulted in an agreement for 1,000 members of the Shingal Resistance Units to join the Iraqi forces. Moves to dismantle the Asayish police force triggered protests as well. The dispute has yet to be resolved. Baghdad has shown less flexibility to Turkey’s demands than Erbil. As Al-Monitor first reported Dec. 22, the Kurdistan Regional Government has asked the US-led coalition to deploy observers to patrol its border with the Kurdish-controlled northeast of Syria, aiming to discourage the PKK from moving men and supplies from its bases in northern Iraq to Syrian Kurdistan.

Nonetheless, the self-rule leadership remains in closer cooperation with Baghdad than Iraqi Kurdistan and even maintains “indirect ties” with militia from the Popular Mobilization Units (PMU), according to Yazidi journalist Eyup Burc. They want “to resolve the problem with Baghdad,” he told Al-Monitor. The integration of Shingal Resistance Units members into the federal forces amounts to “changing garbs,” he said, stressing that the self-rule bodies “will be somehow integrated into the central government as well.” Under the deal, the district governor is supposed to be named by the Kurdistan Democratic Party (KDP), the dominant political force in Iraqi Kurdistan, but on the ground, central government forces involving alternatively the KDP, the PMU or the Shingal Resistance Units are expected to share control in the region, Burc said.

The interests of various actors clash in Sinjar. The PKK, which is at odds with the KDP, wants to keep Sinjar away from KDP influence, as the region provides a crucial route to northeastern Syria, which is controlled by PKK-linked Kurds. The PKK’s relationship with Baghdad is far from acrimonious, for the IS threat has led the two sides to communicate. The Sinjar deal has irked Iran over the potential removal of its PMU allies from the Syrian border. For the same reason, the United States has welcomed the deal, but just like Turkey, it has yet to see its expectations materialize.

As for Mahkmour, the area — right in the heart of Iraq — is home to a refugee camp that hosts more than 12,000 Turkish Kurds, who fled Turkey in the 1990s after the security forces burned down their villages to deprive the PKK of local support. After changing several locations, the refugees settled on a barren slope of Qarachokh Mountain near the town of Makhmour, an area that was beyond the reach of both the Kurdish peshmerga and the Saddam Hussein regime at the time. Over the years, PKK cadres came to run the camp almost autonomously, drawing Ankara’s ire. The area has become the target of Turkish air raids in recent years as PKK fighters, who took part in Makhmour’s liberation from IS, stayed at the camp after the war.

The United Nations continues to issue refugee cards to residents of the camp, but has stalled humanitarian aid amid Turkish objections that the site has now become an armed camp. Similarly, Iraqi Kurdistan has cut off the camp on grounds that the killers of a Turkish intelligence officer in Erbil in 2019 had links to the camp.

The refugees are already weighing their options should Baghdad bow down to Turkish pressure. Should they disperse to other Iraqi cities, move to northeastern Syria or seek asylum in a third country?

“There is nothing but fear for us here,” Azad Dundar, who fled Turkey with his parents as a 12-year-old in 1993, told Al-Monitor. He said he witnessed the killing of his father in their early years ın Iraq. “I don’t want to die before the eyes of my children as well. … I’d go to a third country if they give us the chance,” he said.

Dundar, who had his UN refugee card renewed two months ago, said the Iraqi Kurdistan administration treats camp residents as PKK militants and has denied them entry to the region since July 2019, including to those who had jobs or studied at universities there. The refugees are free to travel to areas under Baghdad’s control, he noted. He said the UN had stopped humanitarian aid for two years because of the presence of armed men. Camp residents are reportedly willing to let go of their arms, but complain that nobody else is protecting them against resurging IS attacks, the latest of which claimed four lives two months ago. Dundar said an Iraqi commander only phoned to warn of IS militants moving toward the camp, without sending any forces to repel the attack.

Dundar said he believes Baghdad is unlikely to touch the camp as long as the IS threat persists because its forces in the region are too weak to protect the Qarachokh mountain pass. “Only we can protect this place,” he said. “But if they tell us to lay down arms, they need to provide security. And if they move to disperse us, the assembly and municipality of the camp will consider the options.”

The Makhmour camp is, in fact, a nutshell of how Turkey’s policy of chasing the Kurds instead of seeking a democratic solution to the Kurdish problem is in a deadlock. This policy not only keeps Turkey from normalizing ties with Syria and Iraq, but also harms its ties with the West.