‘Slight Progress’ in The Negotiations on Cyprus 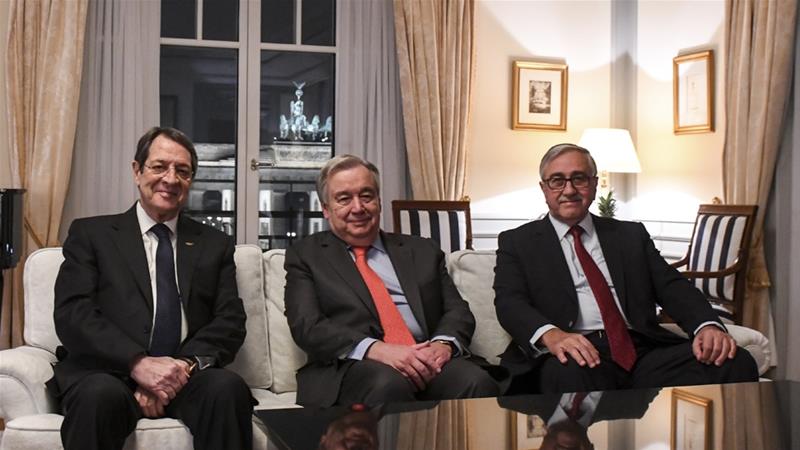 UN Secretary-General Antonio Guterres said “he is looking to bring together the Greek Cypriot and Turkish Cypriot leaders, as well as officials from the ethnically-split Mediterranean island’s three “guarantors” – Greece, Turkey and the United Kingdom – for an informal meeting to reach consensus on those terms.”

“Both leaders welcomed my engagement and reaffirmed to me their commitment and determination to achieve a settlement based on a bi-zonal, bi-communal federation with political equality as set out in the relevant Security Council resolutions,” Guterres said in a written statement (see below) after the meeting in the German capital.

Anastasiades called the meeting as a “first positive step” towards resuming negotiations, while Akinci described it as putting the “derailed peace process back on track”. Christophoros Christophorou, a Nicosia-based political analyst, described the result of the meeting as “slight progress”: “the statement of Guterres is indicative of his hard task to engage the Cypriot leaders on a course for decisive and meaningful negotiations that would end the division of the island,” he told Al Jazeera.

“The continuation of efforts to agree on terms of reference for the negotiations could have been pursued without the meeting. However, the obstacles to an agreement in the past 15 months convinced the secretary-general that the personal commitment of the leaders before proceeding further was necessary. While the election of the Turkish Cypriot community’s leader in April may not constitute an obstacle to negotiations and, eventually, some developments, the environment may not be the most appropriate for such an endeavor,” he added, noting that even in the case that an agreement on the terms of reference is concluded soon, any start of meaningful talks “may be expected after June 2020”.

Background of the issue

“Cyprus was split along ethnic lines in 1974 when Turkey seized the country’s northern third following an Athens-backed coup by Greek Cypriots seeking union with Greece. Turkey still maintains tens of thousands of soldiers on the eastern Mediterranean island, while UN forces patrol the so-called “Green Line” – a 180-km (112-mile) buffer zone between the Turkish-Cypriot north which in 1983 declared itself to be a republic and is recognized only by Ankara, and the Greek-Cypriot south, the seat of the island’s internationally recognized government. Although both sides have long agreed, in principle, to unite Cyprus as a “bi-zonal, bi-communal federation”, there are different understandings of what would that entail.”

“Monday’s meeting may have offered some positive news after more than two years of stalemate, but key sticking points remains” said on Al Jazeera.

“They include a Turkish demand for a continued troop presence on a reunified Cyprus and military intervention rights that Greek Cypriots reject.

The majority Greek Cypriots also oppose what they see as a Turkish-Cypriot condition for veto powers in all decision-making on a federal level.

Akinci said he believed Guterres thought it necessary to personally re-engage in the peace efforts amid concerns that tensions over gas drilling in the eastern Mediterranean could escalate.

Turkey faces sanctions from the European Union for sending warship-escorted vessels to carry out exploratory drilling in waters where EU-member Cyprus has exclusive economic rights.

Turkey, which does not recognize Cyprus as a state, opposes what it calls a “unilateral” Greek-Cypriot gas search and says it is acting to protect its own interests and those of Turkish Cypriots regarding the area’s energy reserves and claims almost half of Cyprus’ exclusive economic zone.

Anastasiades repeated that beyond an agreement on the terms, Turkey must stop its “illegal” drilling off Cyprus and cease threatening the settlement of an uninhabited town under Turkish military control if substantial peace talks are to resume.”

Both leaders welcomed my engagement and reaffirmed to me their commitment and determination to achieve a settlement based on a bi-zonal, bi-communal federation with political equality as set out in the relevant Security Council resolutions, including OP4 of UN Security Council Resolution 716 (1991).

The Turkish Cypriot leader and the Greek Cypriot leader, motivated by a sense of urgency, agreed that achieving a comprehensive and durable settlement to the Cyprus problem within a foreseeable horizon is of utmost importance to the future well-being of both communities and that the status quo is unsustainable.

The Greek Cypriot leader and the Turkish Cypriot leader affirmed their commitment to the Joint Declaration of 11 February 2014, the prior convergences, and the six point framework I presented on 30 June 2017 with a view to achieve a strategic agreement paving the way forward for a comprehensive settlement.

In view of these discussions, I have agreed to extend my efforts to achieve terms of reference to serve as a consensus starting point for phased, meaningful, and results-oriented negotiations at the earliest feasible opportunity. In this regard, I committed to explore with the Turkish Cypriot leader and the Greek Cypriot leader and with the Guarantor powers the possibility to convene an informal five-plus-UN meeting at an appropriate stage. It is acknowledged that this time must be different.

I wish to extend my thanks to the government of the Federal Republic of Germany for its support in facilitating this meeting.