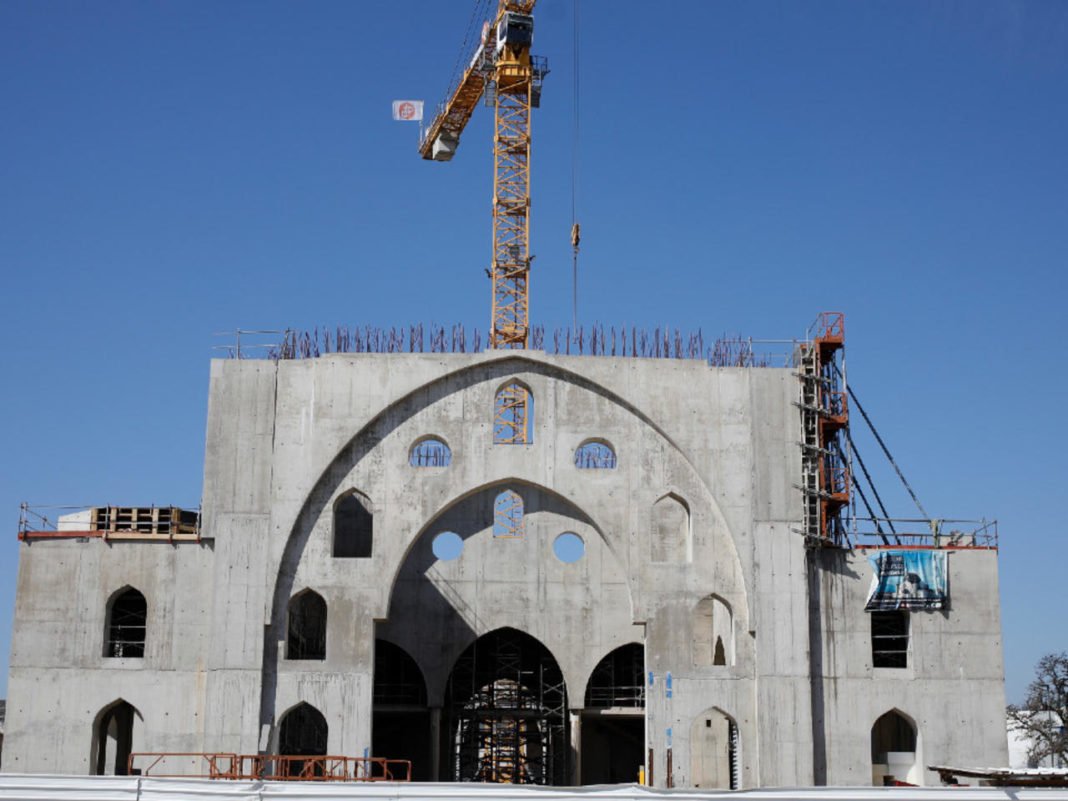 The cement skeleton of the unfinished Eyyub Sultan mosque in France’s eastern city of Strasbourg has become a repository for myriad grievances, ranging from local partisan wrangling to longstanding friction between Islam and this country’s staunchly secular creed.

Claiming concern over foreign — and specifically Turkish — meddling, a top French official launched legal proceedings this week against a decision by Strasbourg’s leftist government to subsidize the construction of the mosque, designed to be Europe’s largest.

Underpinning both issues, analysts say, is the EU’s reliance on Turkey as a bulwark against another massive refugee influx — a reality underpinning a multibillion-dollar migrant deal with Turkey in 2016 which limits the bloc’s muscle-flexing options today.

The EU nations “need Turkey — if Turkey opens its borders what will happen? » asked Muslim specialist Erkan Toguslu, a lecturer at KU Leuven University, even as he warned about Ankara’s growing influence in the region, spread through its nationalist brand of Islam.

That warning appears to resonate with French President Emmanuel Macron. He has racked up an especially bitter and personal feud with his Turkish counterpart, Recep Tayyip Erdogan, wrangling over issues from the conflicts in Libya and Syria, to Turkey’s exploration for oil and gas in the eastern Mediterranean.

More recently Macron’s focus has shifted closer to home. He warned Ankara last month against interfering in next year’s French presidential elections, and his government takes aim at Turkish groups it considers suspect.

Last year, for example, France moved to ban a Turkish ultra-nationalist group called Grey Wolves, after its members were accused of defacing an Armenian genocide memorial near Lyon. Other European countries, including Germany, are considering similar steps.

French lawmakers are also debating legislation against extremism, which would ban foreign funding of religious groups. Among those potentially in its crosshairs: Turkish association Milli Gorus, the main backer of the Strasbourg mosque.

In an interview with French radio Tuesday, Macron’s hard-line interior minister Gerald Darmanin threatened to dissolve Milli Gorus and others he deemed « enemies of the Republic, » noting the Turkish association’s refusal to sign a new government charter against extremism.

Darmanin also took aim at Strasbourg’s Greens Mayor Jeanne Barseghian, finding it regrettable she supported providing nearly $3 million in financing for the mosque, roughly one-tenth of the total cost, « given what we know about political Islam and sometimes foreign meddling on our soil. »

Berseghian has rejected Darmanin’s suggestions. Another leading Greens Party mayor said he was scandalized by Macron’s suggestion of Turkish meddling. Strasbourg city council must still vote again to release the construction funds, a move that may be compromised by the new legal proceedings launched against the financing.

Milli Gorus officials did not reply to a request for comment. But in a recent statement, the group denied being fundamentalist and described itself as a staunchly French association « that has always acted with total transparency, in respect of the republic’s values. » The Strasbourg mosque, with a total price tag of about $38 million, has been in the works for several years, but was halted for lack of funding.

For some analysts, the mosque financing spat, and Macron’s warning of possible foreign election interference, may be aimed mostly at French voters, as critics point to the president’s rightward shift ahead of next year’s vote.

« That Mr. Erdogan today supports Islamist fundamentalism and acts like the enemy of French security today is certain, » far-right leader and leading opposition candidate Marine Le Pen told the Anglo-American Press Association in a recent interview. « But does he have the capacity to interfere with (French) elections? Not more than any other countries that are influential within their own diaspora. »

Still the controversy digs up longstanding fears about the role of Islam in France, home to Western Europe’s largest Muslim community and battered by a series of terrorist attacks, as well as newer concerns about Turkey’s influence here.

« Should we be afraid of Turkish Islam? » France’s La Croix newspaper ask in an analysis of the evolving controversy.

“The Turkish government wants to use this (Strasbourg) mosque and Milli Gorus as a kind of soft power, » said KU Leuven University’s Erkan Toguslu, describing Ankara’s aim as nationalist rather than religious. « It uses Turkish mosques, Turkish associations and the Turkish diaspora in Europe for its own policy, not to defend Muslim interests. »

The quandary of foreign financing of local mosques is a longstanding one in France, where many local Muslim communities are too poor to bankroll construction and a 1905 law separating church and state prevents public financing of places of worship. The Strasbourg mosque doesn’t fall under these strictures because the larger Alsace region where it is located has a different set of rules.

Past funding questions, and fears of foreign influence, have often centered on North African or Middle Eastern countries with sizable ethnic populations in France, and less on Turkey. The estimated 700,000 Muslims with Turkish roots here account for a fraction of France’s roughly 6-million-member Muslim community, and its geographically diverse factions are often at odds with each other. Like several other countries, Turkey also sponsors imams in France, making up for a dearth of local-born ones.

Still, observers say, France’s Turkish community is increasingly influential and ambitious. Last year, its representatives captured the majority of seats on the French Council of the Muslim Faith, the main representative body, for the first time since its creation in 2003.