Turkey cracks down on independent journalists once again – Al-Monitor 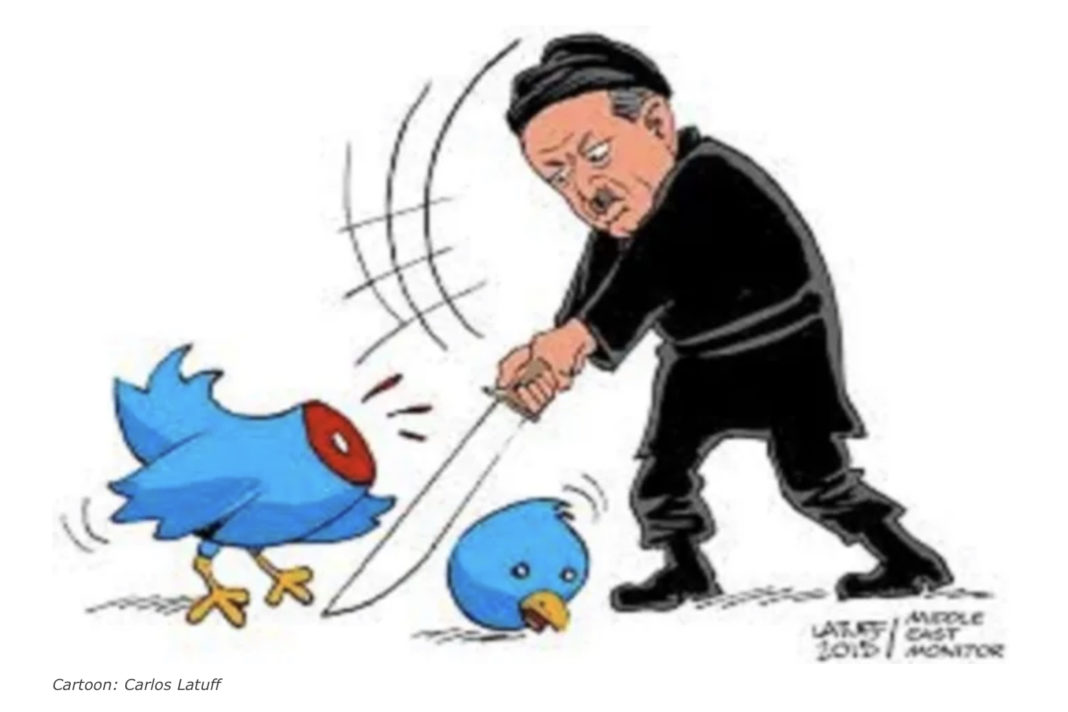 President Recep Tayyip Erdogan portrayed social media as one of the main threats to democracy over the weekend. On Dec. 11, Erdogan reiterated calls to “protect” Turks against “lies and disinformation” on social media. In a video message to a government-organized communications conference in Istanbul, Erdogan said, “We will not, under any circumstances, allow perception management operations to devalue the truth or cover it up with lies.”

Within 24 hours of Erdogan’s comments, Turkish police raided the homes of four local YouTubers in the southern city of Antalya.

« The police raided our house at 7 a.m. today and have taken away our computers and all devices of communication. The police took my spouse Hasan Koksoy to a vehicle and took him away,” tweeted Tugba Koksoy from the Twitter account @KendineMuhabir affiliated with the Kendine Muhabir (A Journalist of His Own) YouTube channel. It mainly airs street interviews on Turkey’s economic difficulties and unemployment and covered the harassment charges against a high-profile member of the ruling Justice and Development Party (AKP).

Simultaneously, police from Antalya’s cyber crimes department raided the homes of Arif Kocabiyik and Turan Kural, the owner and the presenter of the YouTube channel Ilave TV. A fourth YouTuber, who was away in Istanbul, was not detained but told to report to the police immediately. “The police also raided my apartment and confiscated my computer but as I am in Istanbul, I was not taken into custody,” Mahmut Koyuncu of the YouTube channel Sade Vatandas (A Simple Citizen), told Al-Monitor. “I am now on my way to Antalya to report to the police. But what I do not understand is the method — why not simply call us to the police station? Why raid our homes?”

The International Press Institute described the move as a new crackdown on media freedoms in Turkey, citing the cases brought against journalists over the 72 hours since Dec. 10, International Human Rights Day.

On Sunday, three journalists covering the student protests in Ankara were detained and were not allowed to speak their lawyers for hours. The journalists were released in the early hours of Monday along with 90 students who were detained for demonstrating against skyrocketing rent and a lack of dormitories.

The IPI also rapped the charges against veteran journalist Hasan Cemal, who writes a column for independent media outlet T24, for “insulting the president” in two tweets he posted in 2016 and 2020. « The criteria for being a democrat is standing not simply against the military coup but the deepening coup of Erdogan,” Cemal tweeted on July 19, 2016, four days after the unsuccessful coup in Turkey. On July 15, 2020, the fourth anniversary of the coup, he retweeted a column by fellow T24 columnist Murat Belge, highlighting a sentence: « If the caliphate is to be reintroduced again, Erdogan will probably be the caliph.” Cemal’s first hearing will be on April 12.

In Antalya, the YouTubers’ attorney said that the charges against them were unclear. “The four are charged with illegally obtaining personal data,” Omer Furkan Dag, their lawyer and a member of the Opposition IYI Party, told Al-Monitor. “But the charges are vague and unsubstantiated. Given the timing and the nature of this orchestrated dawn raid, we think that it is an effort to silence online media, particularly those with a critical voice and that highlight the discontent of the people. Now they are placed under house arrest on flimsy charges to prevent them from doing their job.”

Turkey’s battered lira tumbled to a psychological benchmark of 14 to the greenback Monday, ahead of a week of key economic decisions on an increase in the minimum wage and new rate cuts expected Thursday. The weakening lira and the rise in inflation led thousands to march through Istanbul on Sunday after trade unions denounced the rise of poverty in the country.

One of the YouTubers was also accused of reposting a photo that allegedly shows sexually charged messages from a lawmaker for the AKP, the lawyer said. Several press reports in November had accused Mucahit Birinci, a member of the AKP Executive Council, of sexually harassing a woman via text. Birinci has pressed charges against the media outlets and journalists including Koksoy and won the screenshots’ swift removal.

In a question to Justice Minister Abdulhamit Gul, lawyer Levent Gok, a member of the center-left Republican People’s Party, asked whether it was “sheer coincidence” that the dawn raids of journalists’ homes came right after Erdogan accused social media of being a threat to democracy. “Is it also true that the YouTubers were arrested following the complaint of AKP deputy Mucahit Birinci, whose name was linked to harassment charges?” asked Gok. “If that is the case, could you explain what the specific charges brought up by Birinci are and what was found in the computers that the police confiscated?” Gok also asked how many social media users were taken into custody in 2020-2021.

Turkey scored 34 out of 100 in the “Freedom on the Net 2021” report by Freedom House, a decline from its scores of 35 in 2020 and 37 in 2019. Countries scoring below 39 re considered “not free” in terms of internet freedom. A law passed last year in Turkey requires social media platforms that have more than 1 million users to maintain a legal representative and store data in the country. After initial resistance, Facebook, YouTube, Twitter and other platforms established offices in Turkey. A new law in the pipeline reportedly aims to establish a social media directorate within the government to monitor online comments and increase penalties — including imprisonment up to five years — for spreading false information on social media. Turkey’s Communications General Directorate announced earlier this year that it would launch a fact-check application, to concern and ridicule in the country’s small independent press.

With Turkey’s traditional media outlets increasingly owned by pro-government groups and critical journalists dismissed from their posts, Turks have turned to journalists’ YouTube channels and other social media accounts as well as the small pool of independent media outlets for information. But these outlets are under fire and often blocked. Freedom House said that hundreds of websites were blocked between June 2020 and June 2021, including the news outlet Tele1’s YouTube account, which was suspended repeatedly without explanation. Along with increasingly frequent legal measures targeting years-old posts, journalists face increasing physical attacks as a result of their online activity. In March 2021, a far-right mob assaulted online journalist Levent Gultekin, breaking his fingers following his comments about the founder of the far-right Nationalist Movement Party.