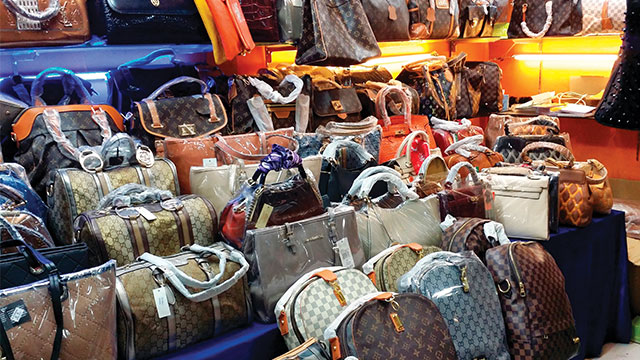 « Photos of fake Gucci bags, Louis Vuitton sweatpants and Nike sneakers are flaunted on the social media accounts of a Turkish store with more than 155,000 followers on TikTok. There are thousands of comments under the posts in English, Italian, Bulgarian, Polish, German, Spanish and French » reports Elif Ince in The Guardian.

Turkey is the third biggest exporter of counterfeit products to the EU after China and Hong Kong, according to data on the value of goods seized. Falls in the value of the Turkish lira and the deterioration of the Turkish economy are further fuelling demand as such items become cheaper to traders buying in euros.

“Our sales doubled in 2021. It’s such a good deal if you earn in dollars or euros,” the Turkish store owner said. “Foreigners can buy a high-quality replica Nike tracksuit for €30 and resell it for €90 back home.”

A December 2021 report published by the EU’s intellectual property office (EUIPO) also points to the trend. The value of counterfeits from Turkey more than tripled from 2019 to 2020, reaching nearly €134m (£111m), and Turkey became the main source of fake designer clothing and medicine stopped at EU borders, surpassing China in these categories.

“We see fakes booming when the economy does badly,” said Zeynep Seda Alhas, who specialises in intellectual property rights at Gün + Partners, a law firm in Istanbul representing some of the world’s most famous brands. “The cheap lira has made exporting counterfeits even more profitable.”

She said the number of court-approved raids by the firm on counterfeit producers doubled in 2021 and the number of items it seized almost tripled. In January, it conducted what Alhas called “the biggest raid in Turkey’s history”, confiscating more than 350,000 pairs of fake designer trainers in three Istanbul workshops, some half-finished and all destined to be eventually sent abroad.

“Profits are much higher in counterfeit goods,” Alhas said, explaining that even factories that produce legally for big brands could “turn bad” during times of economic trouble, working extra shifts to produce fakes.

Turkey’s legal exports have also surged during the currency crisis, increasing 33% over the year and reaching $225bn (£171bn), according to the government-run Turkish Statistical Institute. “There’s no reason why counterfeit goods’ exports would increase any less than legal exports,” said Ümit İzmen, a former chief economist of TÜSİAD, Turkey’s leading business association.Advertisementhttps://de6c96bfc5decc781a2383fe4d587f24.safeframe.googlesyndication.com/safeframe/1-0-38/html/container.html

Lost sales cost the EU €83bn a year, according to EUIPO and İzmen says working conditions at underground production facilities are less likely to comply with laws on wages, child labour and health and safety.

“Counterfeiting is generally perceived as a minor offence and not a serious crime,” İzmen said. “But there’s an organised criminal network behind all this. At the very least, you need to bribe someone at every customs point.”

Law firms such as Alhas’s usually hear about big shipments caught by customs officers – mostly in Germany, Austria and the Netherlands – and then try to find the production site in Turkey.

The website of neighbouring Bulgaria’s customs authority is packed with reports of vehicles from Turkey caught with counterfeit goods. In February 2021, hundreds of bottles of counterfeit perfume were found tucked under a passenger seat in a bus, apparently hidden by the driver.

But much gets through. A producer of fake Dsquared2 jeans said there were freight companies in Istanbul that focused on counterfeit exports, filling trucks with fakes surrounded by originals. “They charge extra to transport fakes, they know people at customs,” he said. “They have built a spider web of networks all over the border.” A 2020 report by Europol said a criminal group regularly transported large quantities of fake designer clothes from Istanbul to Greece with the help of three customs officers recruited to “facilitate” their activity for years before getting caught.

Alhas said her firm’s investigations team – which includes former law enforcement officers – would spend months looking for the factories that made knockoffs, pretending to be buyers and collecting evidence to present to the courts in order to get permission for a raid. “They work like private detectives,” she said.

But catching fakes was almost impossible when orders were placed online and sent in small parcels by mail, explained Alhas.

“I haven’t had any trouble with the law,” said the owner of the store with the 155,000 TikTok followers, who claimed to send about 300 packages abroad monthly . “I could sell a ton more, but I don’t want to attract attention.”