Turkey’s women determined to seize equality, freedom despite all obstacles 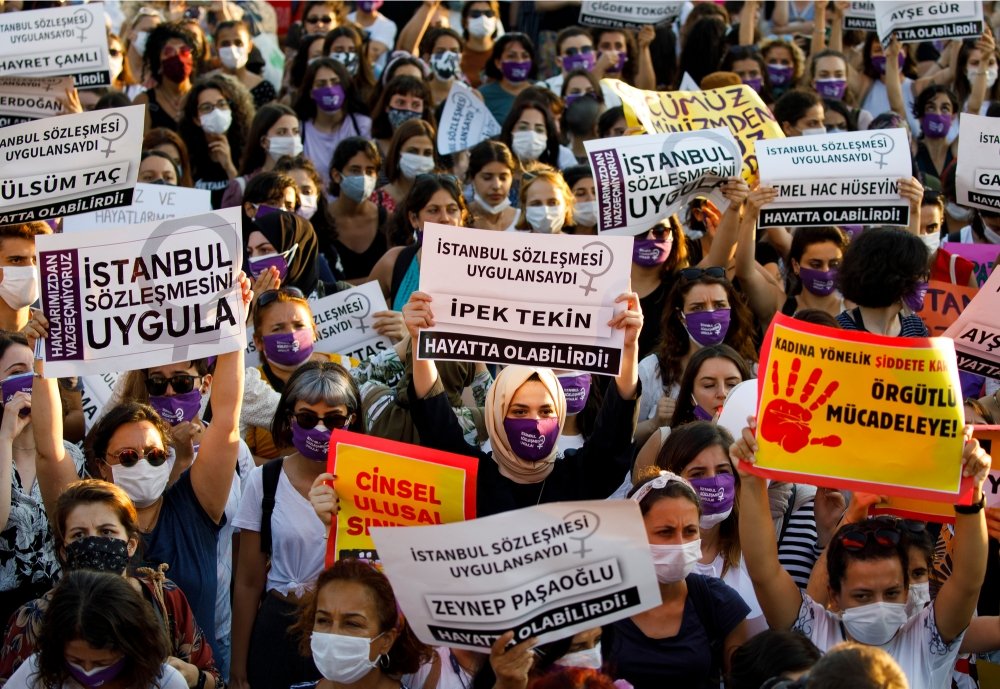 Last month, Turkey’s southeastern Diyarbakır province witnessed the brutal murder of a young woman by her brother, an incident that was caught on the security cameras of a nearby police station.

About 10 days before the incident, Gülistan had applied for protection from a local police department, saying she feared her own relatives would kill her. A day before she was gunned down, she gave an additional statement to the police headquarters in the city.

But no plea to the police, nor the state was able to protect her.

A glimpse at Turkey’s southeast as the nation marks International Women’s Day should suffice in giving an idea of the grim picture facing the women in the country.

Municipalities run by the pro-Kurdish opposition Peoples’ Democratic Party (HDP) had made progress toward gender equality during their short time in office. They were opening women’s centres one after the other, while women gained a wider platform in the political sphere through representation in regional women’s committees.

Women were more visible in many areas of life. They were being hired as bus-drivers, a move that defies local norms, and the practice of co-chairing in local politics became standardized. Many municipalities stipulated in job contracts that violence against women was grounds for dismissal.

There was a clear manifestation of these egalitarian policies in everyday life in southeast Turkey, but unfortunately, we are all too aware of what happened to halt this momentum.

A years-long ongoing crackdown against the HDP led by the Turkish government has led to the arrest of thousands of HDP party officials, while ousting dozens of its elected mayors and lawmakers. Instead, government appointed officials have taken over local administration in the region.

The majority of women’s organisations in the region have been shut down following presidential decrees issued during the two-year state of emergency following the failed coup attempt of 2016.

Women’s centres such as DİKASUM and KARDELEN are no longer around. Moreover, women have been removed as bus drivers in the province and emergency phone lines for victims of domestic abuse have been shut down. So many years of work has been destroyed over the past five years.

Over the past year alone, we, as women, spent a good deal of energy in an effort not to lose the gains we had made, starting with the protection of the Council of Europe Convention on Preventing and Combating Violence against Women and Domestic Violence. Also known as the Istanbul Convention, it is a Council of Europe human rights treaty against domestic and gender-based violence.

The government has voiced its concerns over the treaty, but if Turkey had applied the convention properly, a good number of the femicides over the past year could have been prevented.

The picture to the west of Turkey has not been all that different over the past few years.

At least 408 women were killed in Turkey in 2020, according to Anıt Sayaç, or the Counter Monument, an initiative that keeps a record of femicides going back to 2008, with 67 more deaths registered since the beginning of the year. This is taking place amid daily reports of cases of violence against women across the country, showing that it is not only Gülistan that the government is failing to protect.

As the government has been stifling women’s organisations across the country, but the women of Turkey remain undeterred.

For example, over 310 women and LGBTQ groups have joined forces to form the Women’s Platform for Equality (EŞİK). The group has been hard at work to advocate for the Istanbul Convention to the public and political parties.

EŞİK has listed five demands for the implementation of gender equality in Turkey.

They include the provision of a right to equal citizenship, doing away with discourse and threats to the rights of individuals, an urgent action plan against threats to a violence-free life in and outside the home, ensuring education is equal, free of discrimination and science-based and the implementation of policies that provide equal employment opportunities, free child care and prevention of violence in the work place.

All of Turkey’s political parties must carefully examine the five clauses and take initiative to implement them. Women must be able to say that they refuse to back any political party that fails to acknowledge these demands. I will do exactly this ahead of the upcoming elections and carefully see what each party is doing to bring about gender equality.

The struggle of women in Turkey continues on this March 8th, too.

There are women’s council’s being formed in high schools along with an effort to carry the message of the Istanbul Convention to the whole of the country.

Women are organizing against femicide and pressing for accountability on suspicious homicides in Turkey. In short, there is a concerted effort to seize equality and freedom at home, work, in political parties, universities and every other sphere.

Women are Turkey are refusing to be subservient.

Nurcan Baysal is an activist and author based in Diyarbakır. She worked for many years on poverty, development and migration in Kurdish areas for the U.N. Development Programme, and she is an active member of peace initiatives. She has published four books in Turkish with İletişim Publishers.