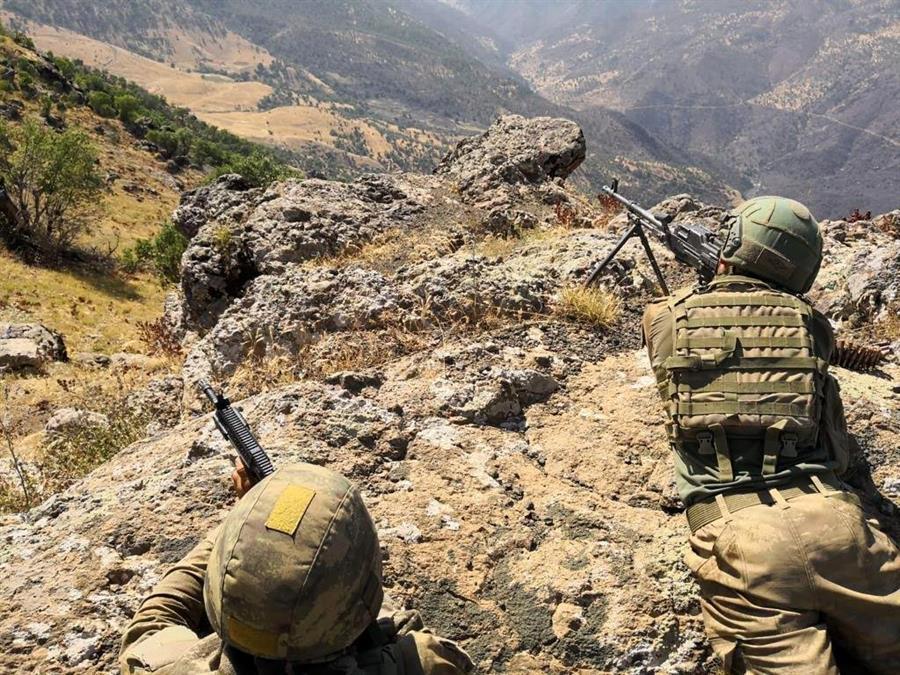 The latest Turkish military operation against the PKK in Iraqi Kurdistan comes at a time when Ankara finds itself increasingly under strain, both on the domestic front and in its frosty ties with Washington.

The Turkish military has launched a critically timed ground and air offensive against Kurdish militants in a mountain range in neighboring Iraqi Kurdistan, the latest in a series of cross-border campaigns since 2019 that have resulted in dozens of Turkish bases in the region.

The extensive offensive, consisting of two operations codenamed Claw-Lightning and Claw-Thunderbolt, began late April 23, targeting the Zap, Metina and Avashin areas, home to long-standing camps of the Kurdistan Workers Party (PKK), the armed outfit that has fought Ankara since 1984 and is designated as a terrorist group by much of the international community. The operation involves fighter jets, attack helicopters and combat and surveillance drones as well as artillery units at the border. On the ground, commando forces have moved in, both by land and by airdrops.

Visiting the operation center in the Turkish border town of Yuksekova on April 25, Defense Minister Hulusi Akar said that more than 1,200 targets had come under artillery and aerial fire and that the commandos had killed 31 PKK members. In a video address to the operation center, President Recep Tayyip Erdogan vowed “to root up terrorism.” Referring to the PKK and its Syrian affiliate, he added, “There is no place for the separatist terrorist organization and terrorism in the future of Turkey, Iraq and Syria.”

According to a PKK statement April 26, Turkish forces airdropped troops at several locations in Avashin, Metina and Zap. In Avashin, they fired gas rockets into “war tunnels” and deployed on a hilltop in the area, the statement said, adding that a similar deployment took place in Metina, where the area of Derare was heavily bombed. The PKK said it responded with “sabotage tactics” and counterattacks to all those actions, claiming the Turkish forces suffered multiple casualties.

Sarbast Sabri, the administrative head of Kani Masi, a town near Metina in the district of Amedi, said April 24 that the Turkish troops had penetrated about 8 kilometers (5 miles) into Iraqi Kurdistan and that Iraqi border guards were not present in the area, while Kurdish peshmerga forces stayed at their checkpoints in the town.

The military calculus behind the Operation Claw series, unfolding in phases since mid-2019, is to block the PKK militants’ movement between their bases, which are spread on a vast stretch from the Qandil mountains on the Iraqi-Iranian border all the way to the Syrian frontier.

Turkish cross-border military action had markedly decreased since a botched operation to rescue Turkish captives held by the PKK in the Gara region in February. The deaths of all 13 captives came as a big embarrassment for Ankara and many believed the incident would deter the government from poorly planned moves across the border. Yet judging by the absence of the weekslong military preparations at the border that usually precede such incursions, the latest operation seemed to have been hastily launched. This, in turn, calls the timing into question.

Erdogan’s government has come under growing political strain in recent weeks as a result of deepening economic woes, an alarming upsurge in COVID-19 infections and an unyielding opposition campaign over the depletion of the central bank’s foreign reserves. To top it all, US President Joe Biden explicitly acknowledged the Armenian genocide April 24, with Ankara lacking the leverage to prevent or retaliate against the move. Biden notified Erdogan of his intentions in a phone conversation the previous day, which coincided with the launch of the cross-border operation. Not surprisingly, many saw the operation as an attempt by a hard-pressed government to distract public attention away from its predicaments. The operation could be instrumental also in stirring popular sentiment against the pro-Kurdish Peoples’ Democratic Party as part of a fresh court case against senior party members.

Domestic considerations aside, the Operation Claw series in Iraqi Kurdistan could be seen as part of Ankara’s strategy to break up “the Kurdish belt” stretching from Syria to Iraq along Turkey’s long borders with the two countries. Since 2016, Turkey has seized several enclaves in northern Syria in a bid to curb Syrian Kurdish forces affiliated with the PKK.

As for Iraq, the Turkish military has long tried to prevent PKK movements across the border by controlling the group’s mountainous routes of clandestine passage to and from Turkey. In the past several years, it has sought to move deeper into Iraqi Kurdistan, setting up temporary bases on commanding hilltops in areas inaccessible by road, which have required air supply. In addition, it has heavily used drones, both for surveillance and surgical strikes.

A map released by Erdogan’s communication office in July after Operation Claw-Tiger showed 37 Turkish “military points” on Iraqi Kurdistan territory. Most of them are concentrated in the regions of Haftanin, Avashin-Basyan and Hakurk, just across the border, while others are in areas as deep as 40 kilometers (25 miles) from the border. According to Turkish sources, the PKK’s routes between the border strip and inner areas in Iraqi Kurdistan have been largely blocked after Turkish deployments at 12 positions at a depth of 15 to 40 kilometers (9 to 25 miles) between the towns of Derkar and Batufa in Zakho district.

After the initial aim of preventing PKK infiltrations into Turkey, the deployments seem to have focused on blocking the militants’ movement between their camps in the region. A PKK source conceded to Al-Monitor that the new strategy restricts the militants’ movement ability and deters them from staying in large numbers on camp grounds, forcing the group to consider new precautions. The Turkish forces have not established an extensive ground control but “because of the increased number of their bases, Turkish soldiers are now nested among the guerrillas,” the source said. Referring to the military outposts dotting the Turkish side of the border, he said, “The fundamental objective of the Operation Claw series is to create a corridor on the opposite side. They have been setting up bases in a way to prevent passage rather than to wage a frontal war.”

An Erbil-based source close to the PKK said that any hopes of controlling Avashin, Metina and Zap at the same time would be unrealistic due to the highly difficult terrain, including deep valleys and numerous hidden passes in Zap and some areas frequented by locals for picnics in Avashin. The source believes the primary goal of the operation is to seize the Zendura peak in Metina, which lies on the route connecting Haftanin to Zap and “is crucial for fully encircling Haftanin.”

Erbil-based political analyst Mustafa Sefik told Al-Monitor that he expected Turkey to move on to Metina and Bahdinan after the Gara raid, but that the failure of the operation and other unfavorable circumstances led him to believe that such an expansion has been postponed. The new operation, he believes, was launched hastily ahead of April 24 as a message that Turkey “will keep fighting its enemies no matter what anyone says.”

Sefik said Turkey might still attempt to expand the operation if no objections come from the United States, Iraq and Iran. “They cannot strip the PKK of its movement ability by controlling Metina alone,” he said. The PKK, for its part, needs to review its deployment tactics as “the Gara operation showed that PKK deployments in large numbers are no longer safe,” he added.

Turkey’s offensive on Gara, coupled with signals that Sinjar might be next in line, drew unusually harsh reactions from Baghdad and Tehran. This time they have kept silent for now, as has the Kurdistan Democratic Party (KDP), the ruling party of Iraqi Kurdistan, which is at odds with the PKK. The KDP “has no direct involvement” in Turkey’s moves but “is not opposing them,” Sefik said.