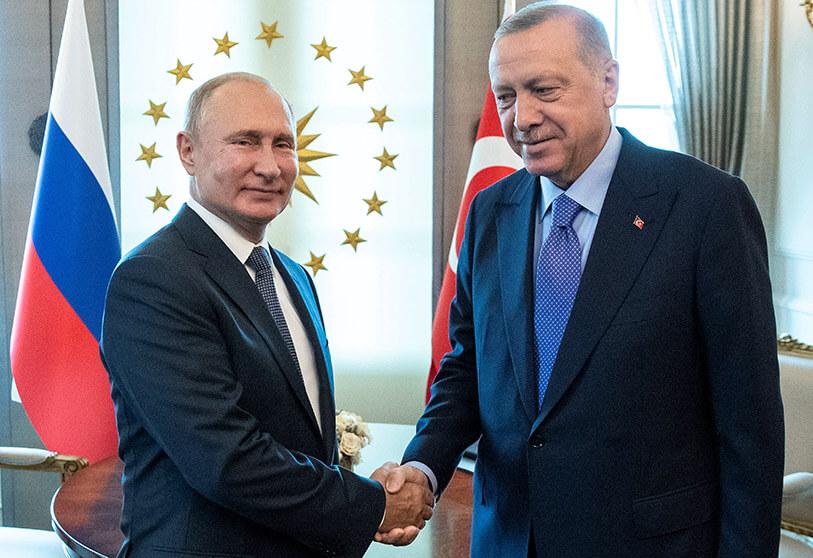 « Erdogan’s failure to achieve his goals in the high-profile meeting with Russian leader Vladimir Putin shows that Turkey’s balancing act with Russia and the United States is on the verge of a collapse. » reports Fehim Taştekin on Al-Monitor.

Having been trapped in its balancing act between Russia and the United States, Turkish diplomacy is trying to navigate rough waters. After Ankara’s efforts to strengthen its position in NATO and mend ties with Washington at the expense of Moscow have failed, Turkish President Recep Tayyip Erdogan has met with his Russian counterpart Vladimir Putin. Yet, his departure from the Russian resort town of Sochi without a joint presser with Putin indicates the extent to which Ankara’s position had weakened before the summit.

Kremlin spokesperson Dmitry Peskov’s description of the meeting as “the most comprehensive agenda since bilateral relations started” was a harbinger of the challenging negotiations awaiting the two leaders.

The Sept. 29 tete-a-tete, in which disputed issues including Syria, the Caucasus, Libya, Afghanistan, new natural gas contracts and Turkey’s possible acquisition of additional Russian-made S-400s missiles were discussed, lasted some two hours and 45 minutes. Considering the time spent for the translation, it was a rather short meeting than expected after a 19-month-long pause.

Erdogan’s remark after the meeting fit in a tweet: “We had a productive meeting with my counterpart Putin and left Sochi.”

The summit also showed that Turkey’s balancing act between the United States and Russia has failed to salvage Turkish diplomacy since President Joe Biden took office in January.

The Erdogan-Putin meeting came on the heels of Erdogan’s visit to the United States last week for the UN General Assembly summit, which resulted in disappointment. The Turkish president kicked off his New York visit with constructive messages toward Washington, with hope for success similar that of his meeting with Biden in June in Brussels. That meeting — the only face-to-face one between Erdogan and Biden since the US president took the office — had come after Turkey’s drone sales to Russia’s arch enemies Poland and Ukraine, Ankara’s loud laments over the annexation of Crimea and Turkey’s willingness to assume the security of Kabul’s international airport after US withdrawal from Afghanistan.

Yet, in New York Erdogan failed to secure a photo opportunity with Biden, let alone a face-to face meeting on the sidelines of the UN General Assembly.

“It is my hope that, as two NATO countries, we should treat each other with friendship, not hostility,” Erdogan said at the end of his New York trip without concealing his annoyance. “But the current trajectory does not bode well. The point we have reached in our relations with the United States is not good. … I cannot say things have gotten off to a good start with Biden.”

He went on to praise Turkish-Russian ties. “We haven’t seen any wrongdoing in our relations with Russia,” he said, stressing that Ankara would not step down on the S-400 missile defense system that Turkey purchased from Russia — one of the most contentious points of the US-Turkey ties.

Reiterating his praise for Putin’s statesmanship and Turkey’s decisiveness on the S-400s ahead of their meeting, Erdogan paid tribute to the Russian firefighters dispatched to Turkey during the wildfires that rattled the country over the summer. “True friends become brighter when the days get dark,” he said.

Putin, in turn, said, « Negotiations with Turkey are sometimes difficult, but we have always left Sochi with a positive outcome.We learn how to reconcile”

The apparent absence of a concrete outcome shows that the contentious issues between Ankara and Moscow will continue to be the topic of technical talks between the countries.

Turkish diplomacy faces several challenges in its ties with Moscow on several fronts. First, Erdogan provided leverage to Putin by admitting that the Turkey-US ties are at their lowest point.

Turkey’s drone sales to Ukraine and Erdogan’s pledge to never recognize the Russian annexation of Crimea have been duly noted by the Russian side, which considers the both issues critical to its national security and territorial integrity. Erdogan reiterated his Crimea pledge during his address to the UN General Assembly after the Turkish Foreign Ministry declared that the Duma elections held in Crimea this month have “no validity for Turkey.” Moreover, Ukrainian Foreign Minister Kuleba Dmytro said that Ukraine was planning to set up a drone plant for the joint production of Turkish-made TB2 drones.

Had Ankara been able to restrain its reaction to Moscow over the issue, Turkey could have used the Russian annexation of Crimea as leverage in its negotiations with Russia. Instead, it has maintained its zero-sum position, drawing the wrath of Moscow.

Furthermore, Turkey is in the worst possible position in its natural gas negotiations with Russia over new contracts. Turkey’s gas contracts expire by the end of this year and five of them are with Russian energy companies including Gazprom. After the United States withdrew its veto on the Nord Stream 2 pipeline that will pump Russian gas to Europe, Russia’s need for the Turkish Stream pipeline was diminished, further eroding Ankara’s position.

The most contentious item between the two capitals is the northwestern Syrian province of Idlib, where the escalation between the Russian-backed Syrian government forces and Turkish-backed rebels is mounting. Russia has conducted at least 150 air campaigns in the region in the past month, accusing Ankara of failing to fulfill its part in the cease-fire deals previously agreed on. Under them, Turkey pledged to cleanse the radical extremist elements from Idlib, including Hayat Tahrir al-Sham (HTS), which controls the region, and to reopen the critical M-4 highway that is controlled by the jihadi forces.

Erdogan was expected to ask Putin for a halt of the airstrikes, elimination of the threats against the Turkish military posts around Idlib and resumption of the joint Turkish-Russian patrol along the M-4.

Meanwhile, Russia’s position on the matter is quite clear. According to Moscow, radical jihadi groups are using Turkish military posts in and around Idlib as a shield to attack forces loyal to Damascus. Speaking on the sidelines of the UN General Assembly summit, Russian Foreign Minister Sergey Lavrov said Russia would not tolerate “terrorist attacks” launched from Idlib.

Syrian government forces have reportedly been preparing for a new move in Idlib after Syrian President Bashar al-Assad’s meeting with Putin on Sept. 14. Speaking after the meeting, Putin said the biggest problem in the war-torn country was the « presence of the foreign forces,” needling Turkey and the United States. Putin might have gauged Turkey’s reaction for a possible Syrian operation along the M-4.

Although Ankara designated HTS as a terrorist organization, it doesn’t seem to consider the group a threat. Besides, Turkey also seems to be avoiding angering the jihadi organizations by fighting openly against them. In terms of its responsibility to wipe out radical jihadi elements in Idlib, Ankara considers HTS’ efforts to rein in other al-Qaeda offshoots in the region sufficient.

Moscow, for its part, doesn’t share Erdogan’s concerns over the Syrian army’s advances toward the Turkish border. Under a 2020 deal that ended Turkey’s Peace Spring Operation in northern Syria, Turkey was forced to allow Syrian government forces’ return east of the Euphrates in a bid to counter the Kurdish-led Syrian Democratic Forces.

Turkey’s position has further weakened this year after Israel and the United States began to attach more significance to the Russian role in Syria in a bid to curb Iranian influence. Furthermore, Saudi Arabia, Egypt, Jordan and the United Arab Emirates have extended an olive branch to Damascus, facilitating the Russian game plan. The US forces’ rapid withdrawal from Afghanistan has created a convenient international atmosphere to speed up the process in Idlib. Damascus, which has long been complaining of Russian leniency toward Turkey, doesn’t want to miss this momentum.

Erdogan, meanwhile, seems to be determined against any change in the status quo in Idlib and border regions where Turkish troops are deployed, as indicated by fresh deployments dispatched to Idlib ahead of the meeting. Abrupt retirement requests by at least two generals who are serving on Syria-related missions in a move widely interpreted as a gesture of disapproval of government policies seem to have failed to break this determination.

In Libya, meanwhile, recent developments have made Russian-Turkish coordination inevitable. Moscow and Ankara’s stance will have a critical role in the security of the upcoming Dec. 24 elections. Both countries have agreed on the withdrawal of foreign militias from the country, but neither Russian private military contractor Wagner nor Turkish troops have withdrawn yet.

The cease-fire process in the conflicted Nagorno-Karabakh region is another issue discussed at the summit. Erdogan’s expectations on this front include opening a corridor connecting Turkey to Azerbaijan through Azeri exclave Nakhchivan and advancement of the efforts to set up the Caucasus Peace Platform — a Turkish cooperation initiative that includes Russia, Turkey, Azerbaijan, Iran, Georgia and Armenia. As part of these efforts, Ankara is sending positive messages to normalize its relations with Yerevan.

Such challenges have likely complicated Erdogan’s efforts to create a give-and-take balance during his meeting with Putin. The purchase of additional S-400s seems to be the only leverage Turkey could play against Moscow. But can Turkey afford to acquire a new batch of S-400s after the first purchase sent Ankara-Washington ties on a nosedive? Erdogan’s remarks might aim to alleviate the tensions with Russia while intimidating the United States. Yet, If the Turkish president is hoping to invest in anti-US sentiment ahead of the 2023 elections to consolidate his dwindling support at home, then his statement might be more than a feint.

On the same subject: Syria to be key topic in Erdogan-Putin summit – Al-Monitor