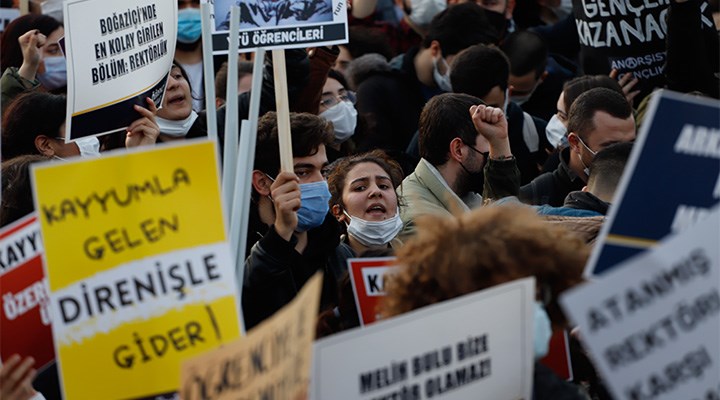 Melih Bulu was the first rector to have been appointed from outside a university since a military coup in 1980.

Turkish President Recep Tayyip Erdogan has removed Melih Bulu as the rector of a top Istanbul university, an appointment that has sparked months of protests and hundreds of arrests.

A presidential decree published in the Official Gazette on Thursday announced the decision.

It did not provide a reason for the change or any further details.

CNN Turk reported that the decision to sack Bulu came after an extraordinary meeting on Wednesday held by the Council of Higher Education, known as YOK, which discussed Bulu’s controversial statements and activities over the past six months. There also have been allegations of plagiarism against Bulu over his PhD.

« The members of the council also evaluated the students’ and professors’ demands and underlined the need not to harm the Bogazici’s institutional identity, » CNN Turk added. « Subsequently, a YOK report on Bulu was submitted to the Turkish presidency. »

The appointment of Bulu, an academic and former political candidate, to the post at Bogazici University had been criticised as undemocratic and the protests since early January briefly spread to other cities.

Demonstrators were angered that Bulu had been the first rector to be appointed from outside a university since a military coup in 1980.

Bulu had previously applied to be a candidate for Erdogan’s ruling AKP party during the country’s 2015 election.

Though Bogazici University had informally held internal elections to select candidates for rector since 1992, in 2016 – in the wake of the July coup attempt – the government used a state of emergency to change the process that selects the rector, giving the power to the Turkish president.

The university has been seen as Turkey’s Harvard by many due to its high-quality education, liberal environment and history stretching back 150 years. Bogazici, which was originally founded by American missionaries, has thousands of alumni working in the best companies in the country and at the top of the state’s bureaucracy.

A person familiar with the government’s thinking said that senior Turkish officials found soft-spoken Bulu « weak » against the establishment within the university. « He is a bit naive, » the person said.

Even though Bogazici alumni and students celebrated the dismissal as a victory, it is quite possible that Erdogan could appoint a hard-liner to the task next time, as the law grants him broad powers to do so.

YOK announced that Bulu’s deputy professor Mehmet Naci Inci will be caretaker until a new appointment.

Among the material that appeared in the demonstrations was a piece of student artwork depicting the Kaaba in Mecca alongside LGBT symbolism and Persian mythological figures.

Interior Minister Suleyman Soylu reported the arrest of « four LGBT freaks » over the display, condemning them as « degenerates » on Twitter. His tweet was later flagged over its hateful content.

One of the first moves made by Bulu after assuming the rectorship was to close down the Bogazici LGBTI+ studies club.

Though he claimed following the closure of the organisation that he was in fact someone who « defends the rights and freedoms of LGBT individuals », the move further angered many on campus.

Bogazici Solidarity, a group representing the efforts against Bulu, said in a statement posted to Twitter that “puppet” Bulu’s overnight appointment and overnight sacking were only an expression of incompetence of the government.

“We reiterate our demands: We will continue our struggle until an election with all components for the presidency to be held and LGBTI+ club to be open and all our democratic demands satisfied,” the statement read.

Polls had suggested there was widespread opposition to « political » appointees for university rectorships, including from AKP supporters.

In February, Abdurrahman Dilipak, a conservative columnist and AKP supporter, suggested that the move to appoint Bulu was « causing problems at the party branches » and suggested that « the method of appointment must be reconsidered ».

Ragip Soylu in Izmir has contributed to this report.