A Queue From Retail Point to Ballot Box 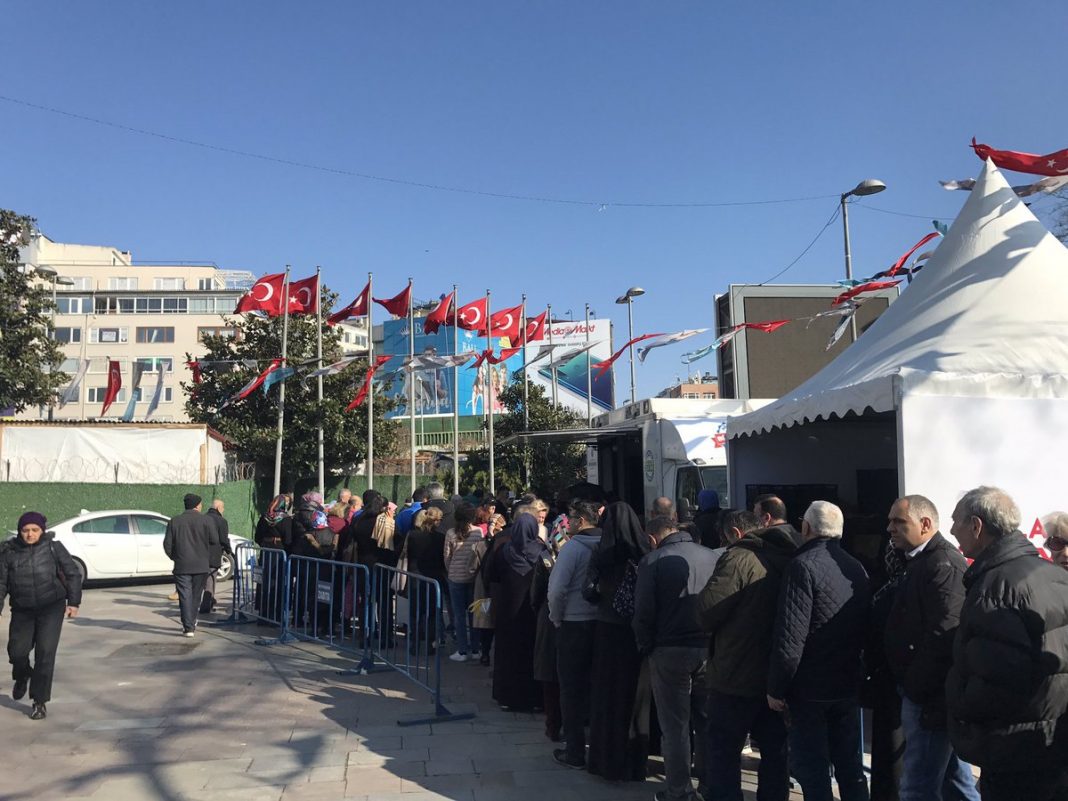 To tackle high food prices, Turkey has introduced the “regulatory retail points,” which are run by municipalities and sell cheap fruits and vegetables. While people are divided, Farmers Union Chair Ay says, “It is for elections and not sustainable.”

At the foot of the Gezi Park in Taksim Square sits the vehicle of İstanbul Metropolitan Municipality. A tent pitched next to the vehicle, with a queue of people in front of it. Per kilogram price for potatoes and onion is 2 TRY (1 USD equals 5.24 TRY as of February 13), tomatoes is 3 TRY, cucumber and spinach is 4 TRY, eggplant is 4.5 TRY and pepper is 6 TRY.

This is the “regulatory retail,” President and Justice and Development Party (AKP) Chair Recep Tayyip Erdoğan’s solution for increasing inflation rates. According to the Turkish Statistical Institute’s (TurkStat) January data, the yearly inflation rate for food and non-alcoholic drinks have increased to 30,97 percent.

For a while, he has been making a lot of noise in rallies, blaming the tomato producers, garlic producers, traders whom he calls stockpilers. He says, “I am calling out to the tomato producers, do you know how much a bullet costs?” In another rally, he says, “They are throwing a curveball to our country through onions, potatoes, green peppers, cucumbers.”

And he presents the solution: “We nullified this attempt too, with the measures we have taken. We have established regulatory retail points.”

The issue, which Erdoğan calls the “food terror,” is also being discussed by the people who wait in the queue at the retail point in Taksim.

One man says, “They even criticize the selling of cheap food.”

The answer comes without delay: “This government crippled the farmers. Is any agriculture left in the country?”

Another one in the queue says, “If it was up to you, the stockpilers would make money all the time. We don’t forget that we waited in queues for gas cylinders in the time of CHP (Republican People’s Party, the main opposition).”

One among those who are not pleased with the regulatory retail says, “This is an investment for the elections” and tensions rise between people. The municipal elections will be held in Turkey on March 31.

Confederation of Farmers’ Unions (Çiftçi-Sen) Chair Abdullah Aysu also begins his comments on the issue, saying, “It is for elections.” Aysu draws attention to Agriculture Credits General Manager Fahrettin Poyraz’s statement, in which he said, “There is a serious decrease in prices. Some markets began to sell potatoes and onions for 2 liras.” Aysu says, “Poyraz said they have a plan for two and a half months for regulatory retails. Hence, the tents will be unpitched after the elections, those who wait in the queues will go to neighborhood markets.”

The elections and the new law on wholesale markets

“[Regulatory retail] has two functions. First, making the prices look like decreased until the elections and giving the message, ‘Look how shrewd I am, I decreased the prices.’ Second, they are trying to pass a new law on wholesale markets. Propagandizing with price decreases, they will privatize the wholesale markets.”

The new bill on wholesale markets is expected to be introduced to the Parliamentary Commission of Agriculture after the elections. According to the draft bill, the Ministry of Trade will be the authority for establishing and running wholesale fruit and vegetable markets. The current Law No. 5957 on Wholesale Markets authorizes the municipalities for that.

Aysu opposes the bill as “it will leave the farmer to the mercy of companies through contracted production.”

How can the retail points sell cheaper?

On the cheaper prices in the regulatory retail points, Aysu says, “Agriculture Credit Cooperatives directly buys the product from the farmers and sells it in vehicles and tents. So, these products do not go to the wholesale market. No wholesale market, no chain markets. By this, it negates to elements that increase the price and it can sell cheaper than markets.”

Quotas for every vegetable and fruit;

In regulatory retail points, of course, people cannot buy fruits and vegetable as much as they want. The quota for onions per one person is 5 kilos. It is 3 kilos for tomatoes, 2 kilos for green peppers and 1 kilo for eggplants.

In the nearest market, prices are at least twice more expensive. For example, one kilo of eggplant is 10.99 TRY. Per kilogram price for the cheapest potatoes and onions is 3.45 TRY.

In some markets, vegetable and fruit stalls are quite dull. Who knows, maybe because of the regulatory retail. “It is not sustainable,” says Abdullah Aysu: “The population is 85 million. You have pitched 50 or 55 tents. Are you gonna feed this population with these tents?”