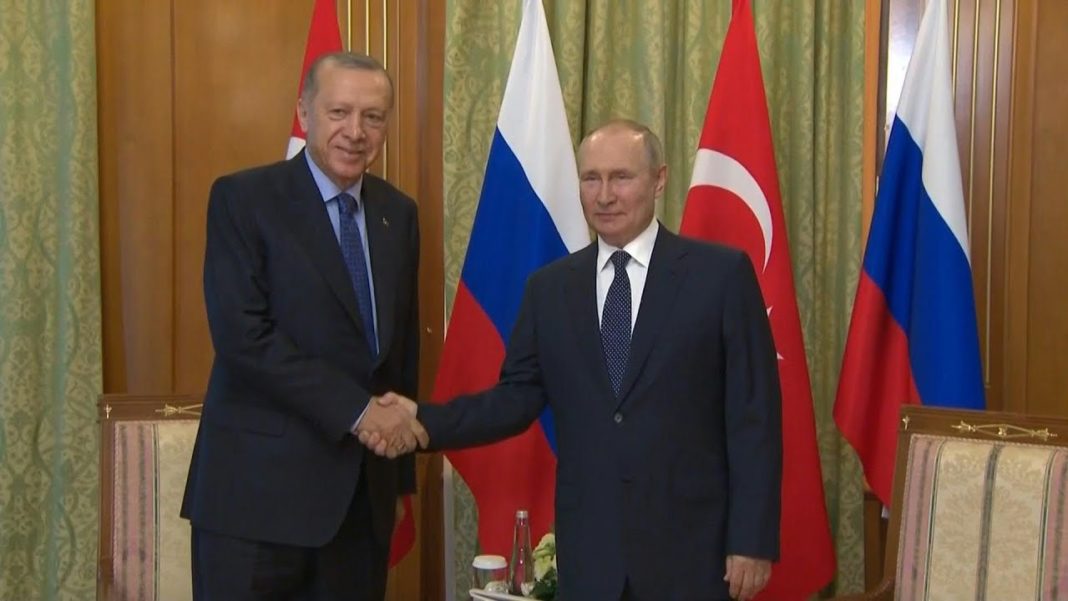 Ankara agreed said Al Monitor on the 5th of August 2022 that part of its natural gas payments to Moscow would be switched to rubles.

Russian President Vladimir Putin and Turkish President Recep Tayyip Erdogan agreed that Ankara would switch part of its payment for Russian natural gas to rubles, in what appeared to be the most concrete result of their four-hour long meeting in the Black Sea resort town of Sochi today.

“We are gradually switching to national currencies, and at the first stage part of supplies will be paid in Russian rubles. This is really a new stage, new opportunities, including for the development of our monetary and financial relations,” Russia’s Deputy Prime Minister Alexander Novak told reporters after the meeting.

In a joint statement the pair agreed to boost cooperation in transport, agriculture, finance and construction. The statement said that the two leaders « reaffirmed their determination to act in coordination and solidarity in the fight against all terrorist organizations » in Syria.

But there was no word of a green light for Turkey’s planned military intervention against US-backed Kurdish forces in northeast Syria. Putin is believed to have made his opposition to another large-scale intervention clear in a July 19 meeting with Erdogan in Tehran. Russian official say any such move would further destabilize Syria. Iran, the Assad regime’s other main backer, is also against an expansion of Turkey’s already substantial occupation of Syria.

Prior to the meeting Erdogan told reporters that “discussing developments in Syria will help ease tensions in the region.” He did not elaborate. Erdogan also said that he expected to ensure that Turkey’s first nuclear plant that is being built by Russia’s Rosatom would be launched as scheduled next year. Novak said the 2023 launch date had been agreed upon by the two leaders.

The $20 billion project ran into turbulence after Rosatom signed a contract with a consortium of three Russian companies to complete work on the project and terminated its existing one with a Turkish firm.

« I believe that (today’s meeting) will open a whole different page in Turkish-Russian relations, » Erdogan predicted.

Putin sounded a similarly positive note, telling reporters that, “Starting with Syria we will discuss regional issues. Turkey is contributing significantly to normalizing the situation here.”

Earlier today, Turkey’s Defense Ministry announced that three more ships carrying grain left Ukrainian ports under the deal. The three vessels, carrying 58,000 tons of grain to Ireland and the UK respectively, will first pass inspections at a monitoring center set up in Istanbul.

« Deliveries have already begun, I want to thank you both for this and for the fact that at the same time an accompanying decision was made on uninterrupted supplies of Russian food and fertilizers to world markets, » Putin said.

For all their upbeat comments, Erdogan and Putin looked tired and joyless before the cameras. They did not hold a news conference after the talks.

Their respective expectations from the summit were unlikely met. The Washington Post, citing unnamed Ukrainian intelligence officials, reported today that Putin wants Erdogan to allow Russia to buy stakes in Turkish oil refineries, oil terminals and reservoirs, “a move that economists say could help disguise the origin of its exports after the European Union’s embargo kicks in fully next year.” Putin apparently also wants Turkish state-owned banks to allow correspondent accounts for Russia’s biggest banks which are under US and EU sanctions. It’s unlikely that Erdogan would go along with either of those schemes and face Western ire when Turkey’s economy is already so fragile