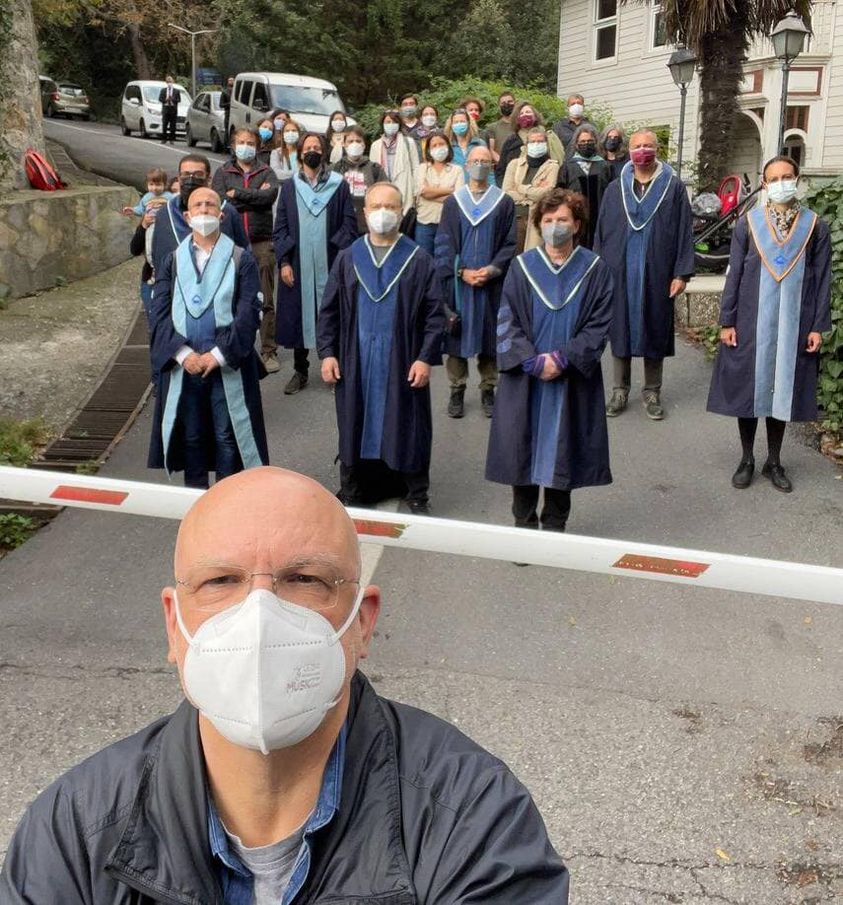 Can Candan is the documentary filmmaker of many films that reveal submerged realities of Turkey. For instance, his feature documentary My Child (2013) is about a courageous and inspiring group of parents of lesbian, gay, bisexual, transgender individuals in Turkey, who redefine what it means to be parents, family and activists in a conservative, homophobic and trans-phobic society.

In his trilingual (Turkish, German, English) feature-length documentary film Duvarlar-Mauern-Walls (2020), he witnesses the largest minority in re-unified, post-Wall Berlin: the immigrant community from Turkey in 1991, « the year when anti-foreigner violence in Germany was becoming too visible to ignore ».

Furthermore, 3 Hours (2008) is a feature length documentary about the University Student Selection Exam in Turkey that takes place once a year with over 1.5 million applicants whose future depends on 3 hours of exam and for whom it is a “life-and-death matter,” as both the applicants and their families endure an overwhelming amount of pressure during the process.

Currently he’s developing a new documentary project called Nuclear alla Turca, where he explores the building of Turkey’s first nuclear power plant after an unrelenting 40-year quest, and with a history of nuclear weapons, radioactive fallout and waste on its territory, as well as a 40-year old anti-nuclear movement.

The book that he edited with Suncem Koçer, Kurdish Documentary Cinema in Turkey: The Politics and Aesthetics of Identity and Resistance is a valuable source to understand documentary as a particularly complex tool for the Kurdish social and political existence, as Kurds lack the official tools of history-writing and cultural preservation.

Can Candan is also a renown academic of documentary filmmaking in Boğaziçi University where students and academic staff along with employees of the university are protesting the appointment of rectors by the Turkish Government for over 8 months. Can Candan who had been outspoken during the months-long protests against President Recep Tayyip Erdoğan’s rector appointment has recently been dismissed by the new rector. Duvar reports:

Internationally renowned documentary filmmaker and academic Can Candan was on Oct. 11 banned from entering the Boğaziçi University Campus upon the orders of the appointed rector Naci İnci. Candan was planning to hold an open lecture at the university premises where he taught for the last 14 years.

Turkish police and private security employees on Oct. 11 prevented internationally renowned documentary filmmaker and academic Can Candan, who was earlier this year dismissed by the new rector of Istanbul’s Boğaziçi University, from entering the campus.

Candan had earlier announced that he would conduct an open lecture on the premises of the South Campus. In a video shared on his Twitter account, Candan said that the ban was imposed by the rectorship.

“I have come here together with my wife, who is an academic at the sociology department. When they [police and private security staff] saw me, they said, ‘We cannot take you into the university.’ When I asked why, they said, ‘It is the orders of the rectorship.’ I cannot hold my open lecture,” Candan said.

“What saddens me is that we have been surrounded by riot and civilian police at the entrance of my institution, where I have taught for the last 14 years, and that the right of education of my students is being violated right now,” he said.

Several social media users protested the rectorship’s move, throwing their support behind Candan with the hashtag of #CanCandanYalnızDeğildir (Can Candan is not alone).

On July 15, Candan was dismissed from Boğaziçi University by acting rector Naci İnci, who assumed the post after the removal of Melih Bulu by President Recep Tayyip Erdoğan.

İnci was vice-rector under Bulu, whose appointment in January sparked mass protests in the university and across Turkey.

On Aug. 20, via a presidential decree, İnci was appointed as the new head of the prestigious institution despite the high disapproval rates he received on polls held among the community.

Following is Can Candan’s biography taken from his page on Academia.edu:

Can Candan is an independent filmmaker and a faculty member at Bogazici University, Istanbul, Turkey. He has a BA from Hampshire College/USA in film and video, and an MFA (a terminal degree, comparable to a PhD in other disciplines) from Temple University/USA in film and media arts.

As a filmmaker since 1989, his works have been screened internationally at festivals, conferences, schools, universities, in galleries, cinemas, and on television. He has taught film courses and workshops, both in universities and media education centers in the United States and in Turkey.

He is a founding member of docIstanbul Center for Documentary Studies (http://docistanbul.blogspot.com) which organized the 2010 Visible Evidence International Documentary Studies Conference at Bogazici University in Istanbul. During the academic year he teaches on documentary history, theory & criticism; documentary cinema in Turkey and mentors film-related projects and theses. In 2016, he published (Cambridge Scholars Publishing, UK) an edited book entitled « Kurdish Documentary Cinema of Turkey » with Suncem Koçer (PhD) and has been collaborating with her on a new edited book entitled « Documentary Cultures in Turkey. »

He is also working on a new book (in Turkish) in collaboration with Sonay Ban (PhD), about the history of documentary cinema in Turkey. He has three feature length documentary films in international distribution. He is also developing and fundraising for his new feature documentary film entitled « Nuclear alla Turca” on the nuclear stories of Turkey.

In 2005, he resigned as the chair of the Film and Television Department of Istanbul Bilgi University after the university administration refused to take action on a sexual harassment case and he was subsequently fired.

In 2012, he helped establish Boğaziçi University’s Sexual Harassment Prevention Commission. In 2014, he resigned as the head of the jury of the national documentary film competition at the Antalya International Film Festival, Turkey, calling attention to the censorship scandal regarding a documentary about the Gezi Park Uprising.

In January 2016, he was one of the 2212 signatories of the Academics for Peace declaration calling on the Turkish Government to end the violence against the Kurdish population and resolve the conflict through peaceful means. Along with other signatories, he was accused of « making propaganda for a terrorist organization » and tried in a heavy penal court under the anti-terror law facing a minimum jail sentence of 15 months.

Following the constitutional court’s ruling in favor of freedom of speech in 2019, he was acquitted of all charges. Since January 2021, he has been actively participating in and documenting the ongoing Bogazici University resistance. He was the academic advisor of Boğaziçi University’s LGBTI+ student club, recently closed down by the government. On July 16th, 2021, after 14 years of teaching full-time at Boğaziçi University, he was unjustly and unlawfully dismissed from his position by the appointed acting rector Naci Inci.

He has been fighting a legal battle to reverse this decision, regarded null and void by the Bogazici University community. A number of international solidarity campaigns have been organized in support of his case. In 2021, he received the Film Critics Association’s Honor Award and also became a member of the Honor Board of the Association of University Faculty in Turkey. He continues to actively advocate for peace, conflict-resolution, human rights, freedom of speech and expression as well as environmental protection. He offers screenings, presentations, talks, workshops, seminars, and consultation.