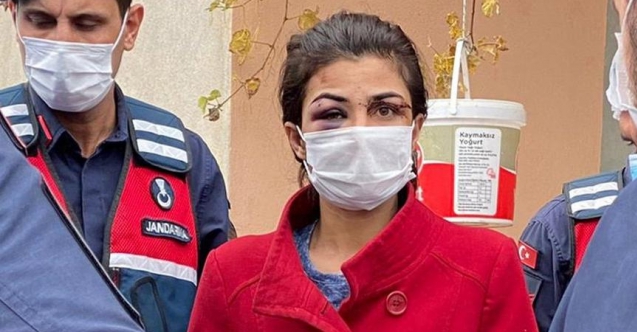 The case against Melek Ipek, who is being supported by women’s rights groups, has become a touchstone issue in Turkish politics.

Handcuffed and naked, Melek Ipek endured a night of beatings, sexual assault and death threats from her husband that left her and their two daughters battered and traumatized. By morning, after he went out and came back to the house, she had picked up a gun and killed him in a struggle.

Ms. Ipek, 31, was detained after calling the police to the scene in the southern Turkish city of Antalya in January. On Monday, she went on trial, charged with murder and facing a life sentence in what is shaping up to be a politically contentious case for women’s rights in the country.

Women’s rights organizations have leapt to support her, saying that she acted in self-defense and had suffered years of abuse by her husband before a long night of torture. If she had been given health care and a psychiatric evaluation after the assault, she would not even be on trial, the Antalya Feminist Collective said in a statement.

For President Recep Tayyip Erdogan, the leader of a conservative Islamist movement who has championed the traditional family as the Turkish ideal, episodes like Ms. Ipek’s case have become an increasingly explosive issue. His opponents accuse him of allowing violence against women to soar during his tenure, and women in his own party, if more cautiously, are supporting better protection for women.

Women’s right groups have pointed to a sharp rise in deaths of women over the last two decades — almost three a day occur somewhere in Turkey — and the impunity of men charged with domestic abuse.

According to Interior Minister Suleyman Soylu, 266 women were killed in episodes of domestic violence last year. Women’s rights groups say the real toll is much higher, citing their own figures of 370 recorded femicides last year — that is, women murdered by men because they are female — and 171 cases of women who lost their lives in suspicious circumstances. On top of that are women’s suicides that are barely investigated, they say.

“In Turkey at least three women are being killed every day,” said Berrin Sonmez, an activist and commentator on women’s issues. “More important, we observe that murders of women have become more violent.”

Some of the brutality of recent cases amounts to systematic torture, she said.

Ms. Ipek appeared in court on Monday by video link from jail. She said she was sad about what had happened and offered condolences to her husband’s family. Weeping, she added, “But I want to tell everything that I have been through without being ashamed and scared anymore.”

She said that she had been a successful student and had dreamed of becoming a math teacher, but that her husband, Ramazan Ipek, had sexually assaulted her while she was still in high school to force her to marry him.

On the night of Jan. 6, Mr. Ipek, 36, who worked as a driver, hit her with a rifle butt and threatened to kill her and their daughters, ages 9 and 7, firing the gun and shattering the window beside them, according to her account in the indictment.

He left the house in the morning and said he would return to kill the two children and then her. When he came back shouting an hour later, a still-handcuffed Ms. Ipek picked up his rifle and the gun went off in a struggle, she said in her account. He was killed by a single round at close range.

Lawyers and activists in Antalya have been dismayed that Ms. Ipek was detained. They are also concerned that the indictment described Mr. Ipek as a family man and charged that Ms. Ipek had chosen to shoot her husband rather than seek help from the police or neighbors.

“Everyone is judging Melek right now: ‘Why did she not call the police? Why didn’t she accuse him before? Why didn’t she get divorced before?’” said Gurbet Kabadayi, a teacher and activist at the Antalya Women’s Counseling Center and Solidarity Association, which has offered support to Ms. Ipek and her family.

The indictment cites the fact that Ms. Ipek did not apply to the state for help or protection, or seek it from her neighbors, before or during the attack as evidence of her intention to kill him. She was ordered to remain in jail until the next hearing, on April 2.

But activists and lawyers say that the police and the judiciary in Turkey frequently fail women in need. Police officers often persuade battered women to return to their husbands, restraining orders are rarely enforced, and the courts often give reduced sentences for good behavior, which encourages a sense of impunity among perpetrators of violence, Ms. Kabadayi said. In one case, a Turkish court in 2017 acquitted two men accused of helping to kill their sister because of her Western lifestyle.

Political opponents and women’s rights campaigners have accused Mr. Erdogan of encouraging the sense of impunity and the subsequent rise in violence by expressing conservative views on women’s role in society and his increasingly authoritarian grip on the judiciary and law enforcement.

In principle, Turkey recognizes women’s rights in legislation and in the Constitution, largely because female activists took part in crafting them, said Hulya Gulbahar, a lawyer who is a member of the Equality Monitoring Platform.

“The issue is,” she said, “as we have seen in the Melek Ipek case, none of the clauses in those laws and the Constitution that are in favor of women are applied.”

In his first decade in power, Mr. Erdogan was applauded for instituting democratic reforms as part of Turkey’s bid to gain membership of the European Union. He also hosted and became the first signatory of the Istanbul Convention, the first international agreement to take on domestic violence, in 2011.

Yet a decade later, women’s rights campaigners say they are fighting attempts from Islamists to withdraw from the Istanbul Convention, roll back legislation like articles covering alimony and inheritance rights, and lower the age of consent from 18 to 12.

“Unfortunately we are in a state of trying to protect what we already gained,” Ms. Sonmez said.

As the issue of withdrawing from the Istanbul Convention came to a head last year, Mr. Erdogan encountered resistance from women in his own camp, including in his family.

The Women and Democracy Association, a nonprofit women’s rights organization founded in 2013, of which Mr. Erdogan’s daughter, Sumeyye Bayraktar, is vice president, came out in favor of the Istanbul Convention. Mr. Erdogan appears to have shelved the idea of withdrawing.

The woman’s association is closely aligned with Mr. Erdogan’s Justice and Development Party and supports its Islamist ideals, emphasizing the importance for women of family and raising children. But its female members have also been supportive of justice for women in marriage and in the work force.

Nurten Ertugrul, a former party member who resigned after being passed over for a position as deputy mayor in favor of a man, said it was the groundswell of support for women’s rights with the Islamist movement that had prevented the withdrawal from the Istanbul Convention. Conservative women cannot always speak out, but they encourage others to do so, she said.

If the Justice and Development Party “had not been afraid of their own women’s rage, and of the women who voted for them,” she said, “they would easily have withdrawn from the Istanbul Convention.”