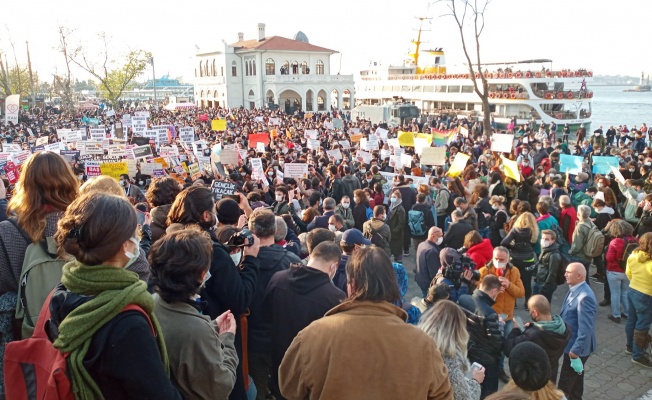 “The protests rocking Turkish university campuses are the biggest since the Gezi demonstrations and like them are the product of the president’s stubborn refusal to consider popular sentiment” states Amberin Zaman, senior correspondent of the Middle East for Al-Monitor.

“I was two years old when Erdogan came to power. I want to be a part of positive change. There are many pious students who think like I do. The voter pool is growing younger.”

Protests over the appointment of a ruling party loyalist as the head of Bogazici, one of Turkey’s most prestigious universities, show no signs of abating even as the government continues to detain and jail students in a bid to intimidate them into submission. Beyza Buldag, a student at the Mimar Sinan Fine Arts University in Istanbul, became the 10th student to be imprisoned in connection with the demonstrations following a Feb. 7 raid on her home near the port city of Izmir. Her alleged crime was to run a Twitter account, “Bogazici Solidarity,” which published an open letter to Turkish President Recep Tayyip Erdogan vowing to not bow to government pressure. “Do not mistake us for those who obey you unconditionally. You are not a sultan and we are not your subjects,” it read.

Prosecutors deemed that Buldag had insulted Erdogan and incited “hatred” and “the intent to commit crimes.” Evidence against Buldag rests on her mobile number and that linked to the offending Twitter account both ending with the same two digits. Buldag has denied all the charges.

Since Jan. 4, students at Bogazici have been demanding that Bulu, an alleged plagiarist and a former parliamentary candidate for Erdogan’s Justice and Development party, resign. Faculty have joined in the fight to deny Bulu legitimacy. They say his appointment is part of an ongoing effort to extinguish academic freedoms and defies the university’s custom of picking its own rector. The right was effectively scrapped in a slew of emergency decrees issued by the government in the wake of the failed January 2016 coup. Erdogan has since hand-picked presidents for over 20 universities with 11 appointed this past week alone.

But the pushback from Bogazici, a bastion of liberal thinking, has been fierce. The protests intensified on Feb. 1, when security forces broke up demonstrations at the university staged in response to the arrests of two students. A further 150 students were detained. Images of baton-wielding police clubbing and tear-gassing students sparked a fresh round of protests that spilled over to the capital Ankara and several other cities. Tensions spiked when students exhibited a poster depicting Islam’s holiest site, the Kaaba, overlaid with an LGBT flag.

Erdogan swiftly seized the moment to turn the protests into a fresh culture war pitting what he called “terrorists” and “vandals” against his conservative base. There is “no such thing” as LGBT, Erdogan claimed in an address to his party’s youth wing. “You are not the LGBT youth, not the youth who commit acts of vandalism. On the contrary, you are the ones who repair broken hearts,” he said.

His hawkish interior minister, Suleyman Soylu, upped the ante. LGBT people were “perverts,” he declared, prompting Twitter to remove his tweet and the US State Department to join numerous Western officials in rebuking Turkey. The controversy serves the government well, distracting attention from soaring food prices and bolstering its narrative about foreign meddling.

Prominent Turkey mobster Alattin Cakici, who has close ties to Erdogan’s ultranationalist allies in the Nationalist Movement Party, waded into the debate. In a handwritten letter tweeted on Feb. 7, Cakici told Bulu to not resign from Bogazici, where “provocative actions” orchestrated by Western powers were being staged.

“What a vote of confidence; 10s of academics, countless students at the university don’t want you, but the mafia boss thinks you are right for the job,” sneered Turkish Twitter personality “Has Avrat.”

The protests are the biggest since the Gezi demonstrations that swept across Turkey in the summer of 2013. They too were the product of Erdogan’s stubborn refusal to consider popular sentiment, in this case over government plans to build a mall in Gezi Park, a rare green space in the heart of Istanbul. Twenty-two people were killed and 8,000 others injured in what the government labeled a Western-inspired plot to overthrow Erdogan. Criminal proceedings against the alleged perpetrators, mostly academics, human rights activists and globally acclaimed philanthropist Osman Kavala, continue.

Analysts say that Erdogan is keen to draw parallels between Gezi and the unrest at Bogazici in a bid to tar both with the same conspiracy-drenched brush. “Such polarizations have always been beneficial and functional for Mr. Erdogan as they have so far helped him create a majority in his favor,” commented Edgar Sar, co-founder of Istanpol, an independent think tank in Istanbul.

But with the economy in the doldrums and the government facing mounting criticism over its handling of the COVID-19 pandemic, the tactic may no longer be as useful. Moreover, unlike Gezi, the current demonstrations “are predominantly based on a single issue,” Sar said. The Gezi protests rapidly evolved into a platform for numerous other grievances. “It’s evident that [the government] sees this as a zero-sum power struggle which they cannot tolerate to lose, because they consider any loss to be a clear indicator of their weakness and thus the beginning of other losses,” he added.

“The Turkish president is particularly concerned that Turkey’s secular and pious youth have succeeded in finding common ground in opposing his increasingly arbitrary rule,” said Aykan Erdemir, who heads the Turkey program at the Foundation for Defense of Democracies, a think tank in Washington. Erdemir was alluding to the participation of pious Bogazici students in the protests. Belkis Sayin, a 20 year-old-psychology student, is among them.

Sayin told Al-Monitor in a telephone interview, “Faith is a very important part of my life.” She said the reason she took part in the protests was because of “the undemocratic manner” in which the rector was appointed. Sayin continued, “I was two years old when Erdogan came to power. I want to be a part of positive change. There are many pious students who think like I do. The voter pool is growing younger.” Sayin comes from a family of AKP supporters. She, however, voted for the secular main opposition Republican People’s Party when she cast her ballot for the first time in the 2018 parliamentary elections, she said.

“To contain this threat, Erdogan will be quick to criminalize the entire spectrum of protesters,” Erdemir noted. “To his disappointment, Erdogan is likely to discover that his polarization tactics are less effective to lure Turkey’s pious youth, who just like their secular peers, bear the brunt of record-high youth unemployment and decline in purchasing power and are less amused by the symbolic ‘triumphs’ political Islam offers,” he added.

That is not to say that Erdogan faces any real or immediate threat to his 18 years of uninterrupted rule. “The protesters at Bogazici have neither the intention nor the means to threaten the government,” said Sar. And for all the students’ bravery, the intimidation is beginning to have an effect. Sayin said she had stopped taking part in the protests because “to be honest, I have quite a bit of homework, and well, because, I am scared of going to jail.” She added, “I know many other students who share the same fears.”