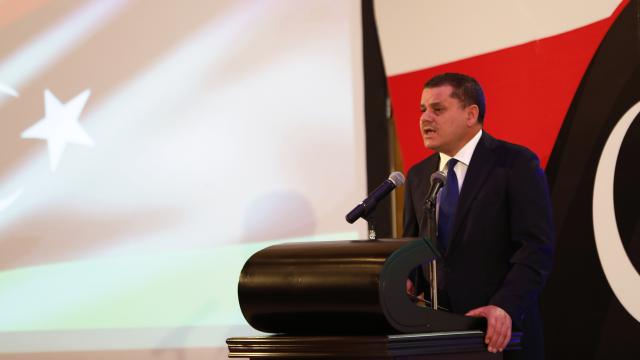 A high-profile visit by Libya’s new interim prime minister, complete with economic accords, has cheered Turkey up, but Ankara’s interests in the war-torn country remain far from guaranteed amid a flurry of rival diplomacy ahead of Libya’s elections in December.

The formation of a new unity government in Libya earlier this year has eroded Turkey’s decisive influence over Tripoli under the previous administration, which drew on Turkish military support to save Tripoli from falling and then make gains on the battlefield against rival eastern forces, backed by Egypt, the United Arab Emirates and Russia.

To make the most of the transition process by the Dec. 24 elections, Turkey has pinned hope on Prime Minister Abdulhamid Dbeibeh, who took office in mid-March. Dbeibeh received a red-carpet welcome in Ankara on April 12-13, unlike Mohammed al-Menfi, the head of Libya’s new presidency council, whom President Recep Tayyip Erdogan chose to greet without a ceremony last month. Fourteen ministers, along with the chief of general staff, accompanied Dbeibeh in the talks, framed as a meeting of a High-Level Strategic Cooperation Council between the two sides.

While the talks focused on economic cooperation, a joint statement emphasized the need to preserve Libya’s territorial and political unity and reaffirmed support for the cease-fire and the election process. Ankara secured Dbeibeh’s commitment to the maritime demarcation and military cooperation accords it had signed with Tripoli in November 2019, but its implications remain questionable. The two sides “emphasize the importance [of the accords] for the common interests of the two countries, reaffirm the validity of the principles they contain and declare their intent to advance them,” the statement said.

The two sides called for a regional conference “with a view to guaranteeing the rights of all parties in the eastern Mediterranean” — a reference to simmering rows over maritime territorial rights and energy exploration in the region, which were a major driver behind Turkey’s intervention in Libya in the first place.

On the economic front, the two sides set a target of $5 billion in bilateral trade, up from about $3 billion at present, and agreed to resume talks on a free trade deal. Turkey’s Ronesans Holding signed deals to build a new terminal at the Tripoli airport, three power plants and a shopping mall. Aksa Enerji also signed a deal for a power plant construction.

The talks involved discussions on ways to revive $18 billion Turkish construction projects interrupted by the eruption of Libya’s civil strife in 2011, resolve a long-standing problem of unpaid debts to Turkish contractors and encourage Turkish participation in reconstruction projects in Libya. Dbeibeh met also with Turkish businesspeople, pledging that Libya would prioritize Turkish companies, given their long experience in the country.

But can Dbeibeh guarantee the future of Turkey’s strategic interests in Libya?

By framing the talks as “high-level strategic cooperation,” Ankara treated Dbeibeh as the head of an elected government rather than of a nine-month interim administration tasked with uniting Libya’s fractured institutions and taking the country to elections. Dbeibeh’s mission requires him to observe delicate equilibriums, both at home and abroad, as the new government and presidential council rest on a fragile compromise between parties that were until recently fighting each other. His signing of deals in Ankara quickly drew objections from the eastern forces of Khalifa Hifter. Moreover, Dbeibeh needs funds to implement the accords, but the parliament has yet to approve the 2021 budget.

Turkish companies do stand a good chance in Libya’s reconstruction, but Libya’s turmoil has meant that accords could stay on paper. In August 2020, for instance, a deal was reached to settle problems stemming from unfinished construction projects, under which the relevant Libyan parties were required to negotiate solutions with the Turkish contractors by Dec. 24, 2020. The issue remains stuck, even after the settlement period was extended to March 24. Turkish businesspeople say their Libyan interlocutors have not even responded to meeting requests.

For other foreign actors, however, Turkey’s military presence and possible entrenchment in Libya is the real issue. Cairo has raised the Libyan file as a precondition for normalization with Ankara. A key policy change that Cairo expects is Turkey’s military withdrawal from Libya, but this seems unlikely until an elected government takes office in Tripoli. Turkish Defense Minister Hulusi Akar told the Libyan delegation in Ankara that military cooperation would continue. Egypt and Turkey have both recognized they cannot move forward by locking horns, but unlike Ankara’s uneasiness, Cairo appears rather relaxed amid expectations that the Libyan vote will not produce a pro-Turkish majority in parliament.

The Turkish-Libyan maritime demarcation deal, rejected by both Egypt and Greece, is another critical issue. Dbeibeh insists the accords with Turkey are “legitimate,” but he has been pragmatic enough to not alienate Cairo and Athens. The long list of visitors he has received in a matter of weeks includes Greek Prime Minister Kyriakos Mitsotakis, along with the prime ministers of Italy and Malta, the presidents of Tunisia and the European Council and the foreign minister of France and Germany. Dbeibeh’s first foreign visit, meanwhile, was to Egypt, followed by trips to Kuwait, the UAE and Saudi Arabia. And after visiting Ankara, he traveled to Moscow.

Dbeibeh’s commitment to the controversial deals should be taken with caution. The reference to “advancing” the deals in the joint statement points to the need for a Libyan parliamentary ratification of the accords. Under the current parliamentary arithmetic, the chance of ratification is next to zero. And come the next parliament, Dbeibeh’s word would mean nothing.

Of note, Menfi, too, has been busy on the diplomatic front. After trips to Paris and Cairo, he paid a visit to Athens on April 14, where he appealed for economic cooperation, just as Dbeibeh did in Ankara. More importantly, he faced fresh calls for the scrapping of the deals with Turkey. Mitsotakis said the two leaders had agreed on “the immediate resumption of talks” on the delimitation of maritime zones, but a spokesperson for Menfi clarified that that the presidential council is not authorized to conclude deals and any talks on future agreements will be up to the elected government. Dbeibeh had reportedly made a similar pledge to Mitsotakis in Tripoli.

While Dbeibeh was visiting Ankara, Greek Foreign Minister Nikos Dendias was in Benghazi, where Libya’s Deputy Prime Minister Hussein Atiya Abdul Hafeez Al-Qatrani offered him the support he was seeking. Dendias thanked Qatrani for his “direct stance” against the “illegal” maritime deal with Turkey.

Libyan observers such as Mohamed Eljarh applauded Menfi for refusing to make commitments to foreign actors. Dbeibeh “can learn some lessons” from Menfi, Eljarh tweeted, arguing that the premier’s commitments to Turkey were “counterproductive to peace” in Libya. Another analyst, Emadeddin Badi, commended Menfi’s stance, saying, “The last thing Libya needs in the lead-up to potential elections is a legitimacy contest” between the premier and the presidential council.

Of note, that point is also among the principles underscored in the UN settlement roadmap for Libya. The related article states that during the interim phase until the elections, “the executive authority shall not consider any new or previous agreements or decisions that harm the stability of foreign relations of the Libyan State or impose long-term obligations on it.”All in all, the rivalry in Libya is only heating up as foreign actors step up their diplomatic offensives to woo the deeply divided Libyan parties, including an Erdogan who sticks to maximalist ambitions.