“Hate and Propaganda media in Turkey : Affiliations , Models And Patterns ” 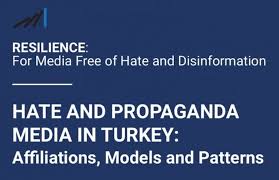 As part of the Resilience Project, a report was published on hate and propaganda media in Turkey in collaboration with the IPS Communication Foundation/bianet.

Written by Sinem Aydınlı (PhD), the report is the result of a study conducted from May to July 2020 and offers a general overview of the political and economic affiliations of the hate and propaganda media in Turkey. It is also based on to the independent reports of organizations monitoring hate speech in Turkey’s media, namely the Hrant Dink Foundation, KAOS GL (Kaos Gay and Lesbian Cultural Research and Solidarity Association) and the Media and Refugee Rights Association.

Highlighting the political and economic background of the hate and propaganda produced in the media during the ruling Justice and Development Party (AKP) period, the report offers the following content:

“Ownership Structures of Hate and Propaganda Media” part of the report summarizes the hate and propaganda media in Turkey in terms of some pro- and anti-AKP media outlets’ economic and political affiliations (including examples about Radio and Television Supreme Council (RTÜK) and Press Advertising Agency (BİK) policies on the critical media).

In the “Conclusion“, the main findings of the research and the urgent needs in relation to the current mediascape in Turkey are listed.

The report listed several recommendations at the end for further action in countering hate speech and disinformation in general and specifically concerning media ownership in Turkey.

You can these policy recommendations below followed by the full report as a PDF format.