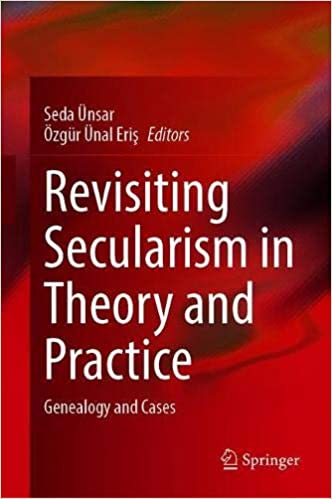 Published in 2020 by Springer and edited by Seda Ünsal and Özgür Ünal Eriş, “Revisiting Secularism in Theory and Practice – Genealogy and Cases” offers a philosophical and macro-historical analysis of secularism, presents historical studies on the secularization of norms and identities in Europe and includes revealing case studies on the EU and Turkey.

“This book offers a philosophical and macro-historical analysis of secularism, supported by an investigation of various contemporary cases. Starting with an in-depth theoretical discussion of the meaning of secularism, it subsequently presents a historical study on the secularization of norms and identities in Europe. The respective case studies cover topics such as the epistemologies of secularism, liberalization and embedded secularism, the relationship between modernity and secularism, the socio-anthropology of secularism, Turkish modernization as a cultural revolution, the political economy of secularism in Turkey, and the secular rationale of the EU neighborhood policy.”

Table of contents (10 chapters)
Confluence of Politics and Religion: An Introduction – Sanasarian, Eliz

Civilization as Secularization: The Transformation of European Identities – Gencer, Bedri

On Multiple Epistemologies of Secularism: Toward a Political Economy Critique – Ünsar, Seda

The Westernisation of a Western Country. Between Liberalisation and the Continuity of Corporate Models: Économie Politique, Secularism and the Organisation of Industry in Eighteenth-Century Spain – Rodríguez Gonzálvez, Francisco Jorge

The Modern Is not Secular: Mapping the Idea of Secularism in the Works of Steve Bruce, Charles Taylor, and Talal Asad – Dedeoğlu, Çağdaş

The Sociology and Anthropology of Secularism: From Genealogy/Power to the Multiple Manifestations of the Secular – Vicini, Fabio

Understanding Turkish Modernization in the Midst of Conjectural Changes in Ethics and Politics – Şener, A. Murat

The Political Economy of Secularism in Turkey: Beyond Culturalist and Ideational Explanations – Boyraz, Cemil

Does Religion Matter? In Search of a Secular Rationale of the EU Neighbourhood Policy: Cases of Egypt, Lebanon, Jordan – Kirik, Hikmet (et al.)