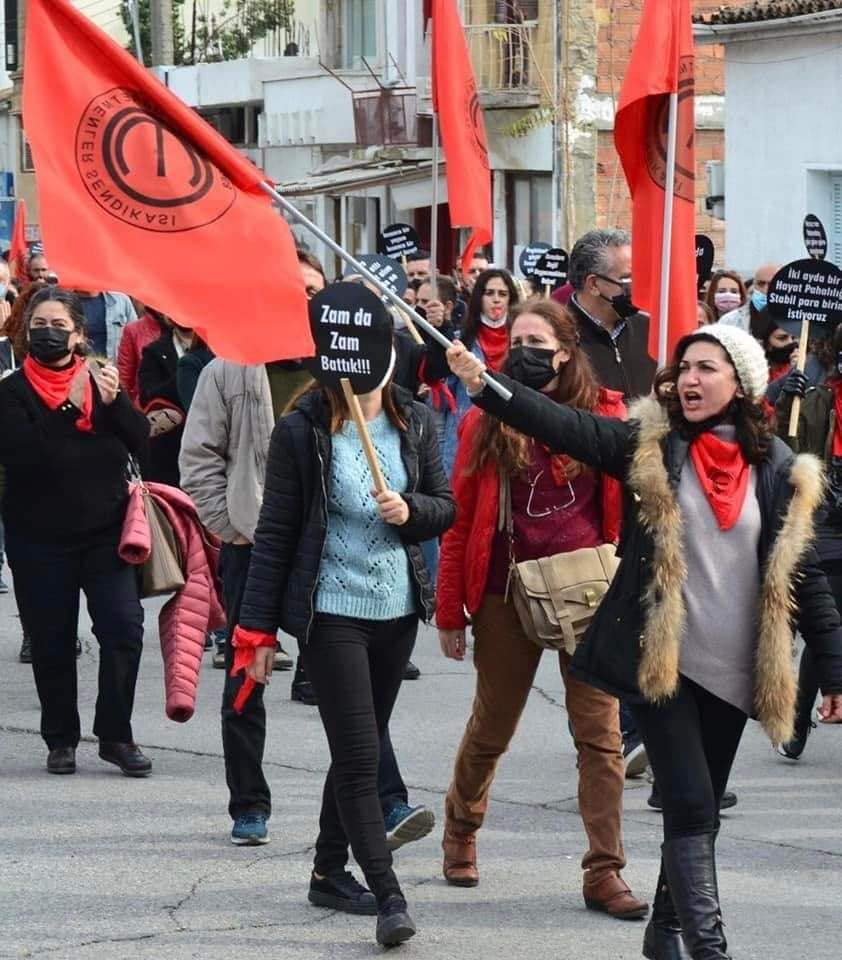 « With the economy in freefall and allegations of political interference, people have taken to the streets to advocate for federal future » reports Helena Smith in Guardian.

In his sun-filled office in north Nicosia, Şener Elcil is plotting his next protest. Anger, he says, is in the air in Turkish-occupied northern Cyprus.

The economy is in freefall, thanks to the self-declared republic’s financial and political dependence on Turkey. Thousands have taken to the streets, spurred by inflation rates that have left many struggling to make ends meet; ahead of parliamentary polls later this month, calls for a boycott are mounting, while a blacklist of Turkish Cypriot dissidents, reportedly drawn up at the behest of Ankara, has spawned consternation and fear.

“Turkey is our biggest problem,” says Elcil, who heads the Turkish Cypriot teachers’ union and is a vocal proponent of reunification of the war-divided island under a federal umbrella with the Greek-run south. “It should keep its hands off Cyprus and take its lira and go away.”

Elcil, 58, is among the statelet’s most outspoken opponents of the Turkish president, Recep Tayyip Erdoğan, and his unorthodox economic policies.

The recent gyrations of the Turkish lira – adopted by the territory in 1976, two years after the Turkish invasion – have had a devastating effect on daily life for a populace that remains under international embargo and cut off from the rest of the world. The use of foreign currency for property transactions and the purchase of imported goods has made a bad situation worse – even if the lira has regained some of its dramatic loss in value against the dollar.

Amid rising desperation, along with demands for the entity to adopt a “stable” currency, Elcil is far from alone.

“People are tired of international isolation, and they’re aware that it will only get worse,” he says. “Five years ago, a teacher first entering our system earned the equivalent of €1,100 (£920) a month. Today, because of the lira, they’d take home €350 a month.”

The protests come as hopes of reuniting Cyprus have rarely been as bleak. Last week, nearly 15 months after Ersin Tatar, a nationalist hardliner, won presidential elections in the north, the UN secretary general, António Guterres, issued his starkest report yet, warning that “without decisive action” further efforts to reach a negotiated peace settlement appeared increasingly slim.

“Partition is so close,” says Izzet Izcan, who heads the United Cyprus party, one of three leftwing groups that have announced they will be abstaining from the 23 January parliamentary vote. “Tatar is Ankara’s puppet who was elected only after Turkey intervened in our democratic process. His pro-partition policies are not in the interests of our community. The only way to oppose them is to fight all together.”

In the 38 years since the breakaway republic unilaterally declared independence, Turkey’s interference in the entity’s affairs had never been as flagrant, claimed Izcan, echoing a widely voiced concern. “Elections are no longer representative of the real will of ordinary Turkish Cypriots. They’re like a game planned and played by Turkey,” the former MP said. “Our main problem is political. Our economic difficulties are the result of a political situation, of Turkey continuing its military occupation of the north by means of the lira.”Cyprus has been split between a Greek Cypriot south and Turkish Cypriot north since an Athens-backed coup, aimed at union with Greece, prompted Ankara to launch a military operation to seize its northern third. Although Turkish Cypriots voted in favour of reunification in a referendum in 2004, the island entered the EU as a divided state after its majority Greek Cypriot population rejected the prospect of power sharing. Until reunification is achieved, EU laws are suspended in the north despite it also formally being part of the bloc.

The growing disgruntlement follows alarm over the deportation from Turkey of prominent Turkish Cypriots opposed to Ankara’s policies.

Until recently the self-styled state – acknowledged solely by Ankara – was regarded as a safe zone for opponents of Erdoğan and his governing AKP party, one in which Turkish Cypriots and exiled mainland Turks indulged freely in criticism of the president’s authoritarian leadership.

But the appearance of a blacklist, published by Avrupa, a local newspaper, in October has heightened anxiety over the lengths to which Turkey is willing to go to silence dissent. The paper identified 42 politicians, writers, journalists, lawyers, trade unionists and artists as being on the list.

“It’s created fear and uncertainty,” says Mehmet Harmancı, the mayor of North Nicosia, drawing on a cigarette in a cafe near the divided capital’s UN-patrolled buffer zone. “Nobody knows exactly who is on it. All we know is there is a list, a blacklist of people seen as a security threat in Turkey who are blocked from entering the country.”

People previously unafraid to voice opinions were increasingly concerned, he said, about the consequences if they did so. Turkish Cypriots expelled from Turkey had learned of the ban only upon arrival in the nation.

“Even if ours is an unrecognised country we’ve had a longstanding democratic tradition of freedom of speech, of respecting each other’s values and ideas,” says Harmancı. “Since the election of Ersin Tatar, that has changed.”

Tatar, who was raised in the UK and educated at Cambridge before returning to Cyprus, has used his term in office to advocate for a two-state solution to the island’s division after years of failed negotiations to reunite it as a bi-zonal, bi-communal federation – a proposal flatly rejected by the EU. He has defended the travel ban, saying: “Every country has the right not to allow entry foreign nationals on the grounds of security when faced with threats and insults.”

However, Turkish Cypriots thought to be on the list are united in their desire for reunification and opposed to any suggestion that the EU’s most easterly member state should remain partitioned.

For Ahmet Cavit An, who co-founded the Movement for an Independent and Federal Cyprus, the island’s first such organisation, the memory of being stopped by immigration officers at Istanbul airport last summer is still painfully vivid. “I was at the passport control when they said I was persona non grata,” says the 71-year-old retired paediatrician. “I was then told I should write to the Turkish embassy in Nicosia for more information. Five months after my lawyer sent a registered letter demanding an explanation we’ve still not had a reply.”

In a landmark case, won in 2003, An took Ankara to the European court of human rights for being prevented from crossing into the island’s buffer zone to participate in bi-communal meetings. “What I want to know is the duration of this ban so I can get on with my life,” he says.

In October the European Federation of Journalists condemned the arrest of Ali Kismir, who heads the north’s press trade union, after he was detained at Istanbul airport and denied entry into Turkey.

“I was taken to a special deportation area where my photograph and fingerprints were taken,” he recalls. “It makes me very angry to think that I was treated like a terrorist when all I do is write the truth.”

Kismir, the fourth Turkish Cypriot to be barred entry to Turkey, is a well-known columnist who took issue with Ankara’s electoral meddling to ensure Tatar’s election. His convictions are such that he sports a tattoo bearing the word “peace” in both Greek and Turkish on his right arm.

In recent weeks, Turkish opposition MPs have also raised the plight of Turkish Cypriots being banned from Turkey, arguing that this runs counter to the motherland’s professed desire to protect the minority.

But, like almost every Turkish Cypriot opposed to Ankara’s policies, Elcil says time is running out for a community already outnumbered by settlers imported from the mainland. About 2,000 Turkish Cypriots have relocated to the south, lured by jobs and better living standards.

“There have to be more protests that target Turkey, because Turkey is the biggest obstacle to a solution of the Cyprus problem and reunification,” he says. “They call us traitors and Turkish-speaking Greeks but we’re not giving up. We’re here to stay and we’re here to fight.”