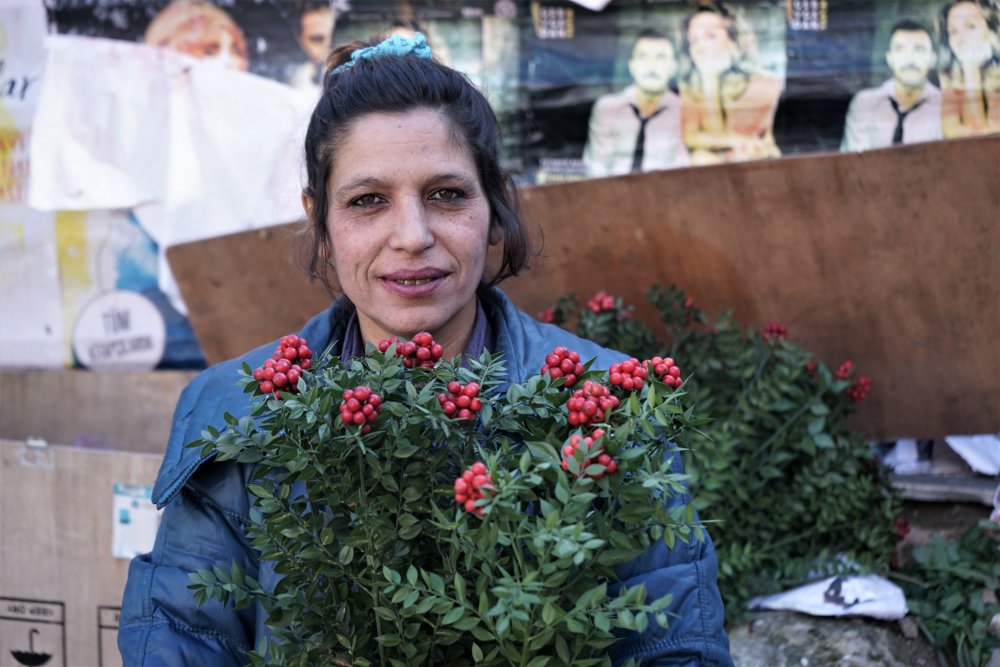 « When flower vendors put out the red and green kokina on the streets, holiday season has arrived in Istanbul. » says Elif İnce in Guardian.

When flower vendors put out the red and green kokina on the streets, holiday season has arrived in Istanbul.

Widely believed to have begun as a Christmas tradition of Turkey’s Greek community, kokina is made by tying together two different plants that grow in the wild, and looks like a picture-perfect version of holly. Its name comes from the Greek for red.

Romany florists have been making this bouquet for at least a century, collecting the blood-red berries and stems, both from prickly plants found in woodlands. It is a vital source of income for many Roma – members of one of Turkey’s poorest ethnic groups, who are barred from all but the lowest paying jobs by widespread discrimination – and especially this year, when there is little other work available and the economic situation is getting worse.

Eyüp, 23, a Romany cleaning worker in Istanbul, used his annual leave to forage for the red berries in Samsun, a city by the Black Sea. He had to leave his wife and two small children at home, and has been staying in a makeshift tent in the cold for weeks, climbing tall trees and bushes to reach the clusters they call gıcır.

Kokina does not wilt for months after being foraged, which could explain the popularity of this laborious invention that Eyüp called “a torture to make”. “My hands are awful because of the thorns,” he said. “But I needed to pay my bills.” The family has no fridge at home, and has not been able to afford milk formula and nappies for their children lately.

According to official statistics, annual inflation reached 21.31% in November, a figure critics say is too low and does not reflect reality. An independent group of academics called the Inflation Research Group has been challenging official data with calculations of 58.65% in November.

The leader of the main opposition, Kemal Kılıçdaroğlu, wrote to owners of supermarkets in December, asking them to not raise the prices of “10 items for survival” during the winter, including flour, salt and pasta. That seems unlikely: since January, prices for eggs have increased by 48% and yoghurt by 45%, according to research by teyit.org, a factchecking platform that compared price tags in two popular retailers.

“We’ve all become poorer, but for some, there is no lower step,” said Hacer Foggo, a veteran civil society activist who founded an NGO called Deep Poverty Network during the pandemic to support the neediest, many of whom are Roma.

Some Romany families she meets cannot pay for baby food, replacing it with sugared water. In almost every home NGO workers visit now, they see delayed development in young children because of chronic undernutrition. “A six-year-old looks three,” Foggo said.

In a 2020 survey, the group found that 49% of the families could not even afford clean drinking water. “It’s got a lot worse since then,” she added.

A 2012 Council of Europe report said Turkey had the largest Romany population in Europe and attempts had periodically been made to improve their lot. Recep Tayyip Erdoğan, the Turkish president, apologised to the Roma in 2010 for decades of discriminatory policies and announced an initiative to help. Another action plan followed in 2016 but critics have said both remain on paper.

Poverty is passed on from one generation to the next, Foggo said. “Roma children I met years ago are now collecting trash like their fathers.”

Kokina, too, has been passed down the generations. A Turkish newspaper article from 1934 mentioned “Gypsies selling kokina for Christmas” on Istiklal Caddesi, a popular shopping avenue at the heart of Istanbul. “We learned how to make it from our grandparents as kids,” said Eyüp. He has assembled at least 10,000 branches since October.

“All hopes are on kokina now,” Foggo said.