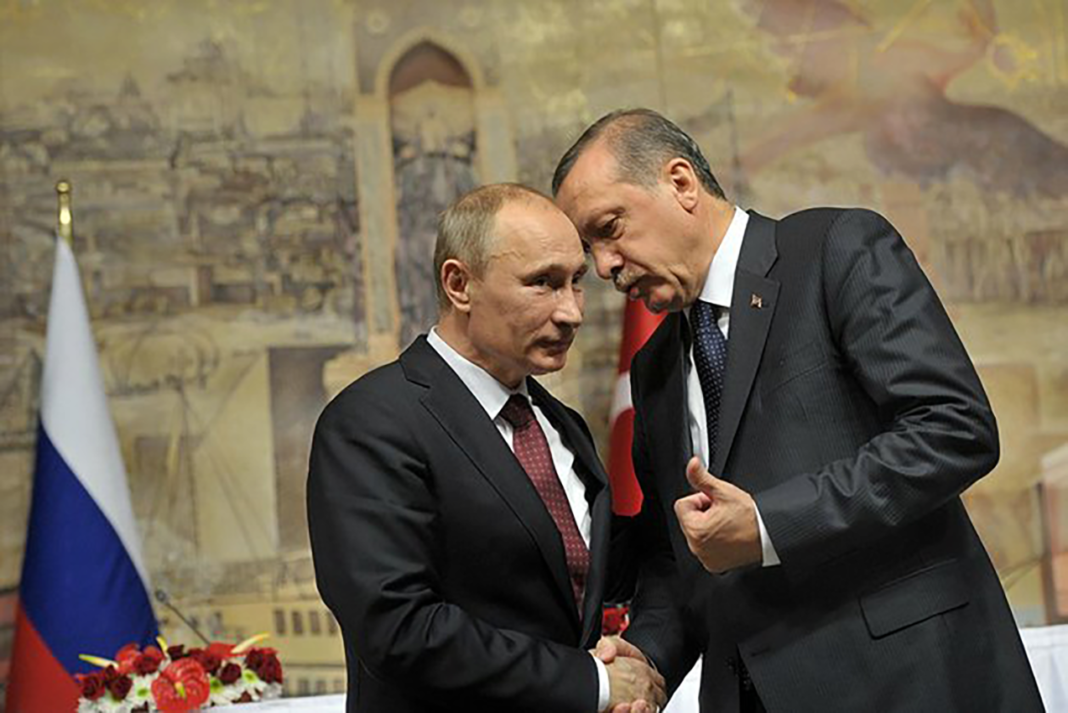 A brilliant synthesis of Turkey’s foreign policy of two decades published in. CEPA February 17, 2022 and The Washington Institute for Near Eastern Policiy

Turkey has been forced to adopt a new approach abroad, presenting a valuable opportunity that the United States and Europe need to seize quickly.

Turkish foreign policy under President Recep Tayyip Erdogan has gone through a number of sharp turns since 2003, with Erdogan taking stock of global and domestic dynamics and changing the country’s direction back and forth between Europe, the US, and the Middle East. The country now seems at the precipice of yet another foreign policy turn, informed by Erdogan’s frustrated Middle Eastern pivot since 2011—more specifically his failure to cash in the Arab uprisings—and the slowing Turkish economy, which is peeling away Erdogan’s base and forcing him to turn Turkey’s face to Europe and the West, with which it is economically integrated. His goal: reset ties with rich Gulf countries and Israel, and build a narrative of good relations with the West in order to attract investment, return to economic growth, and re-build his base to win the 2023 elections.

Erdogan came to power in Turkey 19 years ago, serving as prime minister until 2014 and as president since. His foreign policy up to this point can be divided into an initial period of aspirational multilateralism with a strong pro-EU tilt, and a subsequent era rooted in hard-power and hard bargaining, and support for the Muslim Brotherhood and a Middle Eastern tilt. Both approaches were rational responses to shifting international, domestic, and regional dynamics. Those dynamics have shifted once again in 2022, pointing to a third evolution.

Erdogan’s initial foreign policy idealism stemmed from a belief that Ankara’s 1990s-era approach to its immediate neighborhood—the Caucasus, the Middle East, and the Kurdistan Workers Party (PKK) in Iraq—lacked imagination, and that outreach beyond NATO was weak. Despite a powerful military, tremendous economic potential, and sociocultural links to neighboring regions, Turkey barely influenced regional affairs. Turkish diplomatic and intelligence networks, military partnerships, and investments abroad lagged. Overcoming this underperformance would require an optimistic, multi-directional, and multi-dimensional approach, epitomized by the slogans “zero problems with neighbors” and “strategic depth.”

This approach brought outreach to the Kurds of Iraq and even the PKK; attempted Arab-Israeli mediation; reconciliation with Assad’s Syria; nuclear talks with Iran on behalf of President Obama; diplomatic ties with Armenia; improved relations with Russia; unification of Cyprus; reforms to facilitate EU membership; new business ventures in dozens of countries; and significant development and diplomatic engagement in Africa.

The era of optimism ended with a series of disappointments. Assad took back much of his country from pro-Turkey rebels, and with that Erdogan’s hopes of a friendly government in Damascus. Libya descended into civil war following Qadhafi’s ouster, Israel lost interest in talks with the Palestinians and was deeply upset by Erdogan’s devotion to Hamas, Iranian influence rose in Iraq and Syria, the EU admitted Cyprus and froze out Turkey, while Washington imposed a de facto arms embargo against Ankara.

Turkey’s economic position had improved, but Erdogan simultaneously lost confidence in collective security mechanisms. External disappointments were exacerbated by the president’s anger at the PKK for resuming its insurgency in 2015, his erstwhile liberal partners rallying against him in the 2013 Gezi Park protests, and the Gulen movement for attempting to undermine and ultimately overthrow his government during the failed coup attempt of 2016. Thereafter, growing threats on Turkey’s borders—PKK attacks in Turkey from Iraq and Syria, a budding Greek-Cypriot-Israeli-Egyptian alliance in the Eastern Mediterranean, unilateral Russian and American moves across the Middle East (especially in Syria, where both powers have cultivated the PKK’s Syrian franchise, the Peoples Protection Forces, or YPG)—shifted Turkish foreign policy into realpolitik overdrive.

Erdogan directed development of a complex power projection system including an enhanced diplomatic network, ramped-up exports and economic agreements, defense industrial self-sufficiency, defense basing and access agreements in Africa, Europe, and Asia, as well as adopting a less constrained military and naval doctrine—the latter denies Greece access to much of the East Mediterranean. He has simultaneously adopted further authoritarian methods at home, limiting potential opposition to his hard power moves. These enabled Erdogan to prevent a PKK-controlled “terror corridor” along Turkey’s southern border (between 2016-2019), by pushing the YPG away from the Turkish border and employing drone warfare against PKK bases and holdouts inside Iraq, and to conduct sequential and successful military campaigns in Syria, Libya, and Nagorno Karabagh, conferring what amounts to a geopolitical veto in and near Turkish territory—often at the expense of Russian allies and proxies.

However, Turkey now faces a changing landscape in 2022, and accordingly seems to be shifting a third time—away from unilateral realpolitik and back to a more nuanced and multilateral approach. Six key factors drive the present adaptation: US retrenchment; the need to boost exports and foreign investment in order to revive economic growth; the need to diplomatically consolidate gains from recent military victories in Libya, Syria, and the South Caucasus; the need to reverse anti-Turkish alignments in the region; Ankara’s increasing regional competition with Russia and Iran; and the impending presidential elections of 2023.

Successful application of Turkish hard power created a new set of problems: rising Greco-Arab-Israeli security cooperation around Turkey, US hedging moves and continued cooperation with the YPG, Russia’s own hard power turn in Syria and Ukraine; Iranian re-assertion in the Levant; and chaos in Afghanistan. Most importantly, Turkey’s massive foreign debt and a weak Lira have necessitated more trade, investment, and comity with Europe and the US. Europe is an especially important piece of this new alignment: Turkey remains completely integrated economically with the EU—thanks to the Customs Union in place since 1996, as well as centuries-old bilateral economic, investment, and trade ties—notwithstanding Erdogan’s efforts in recent years to make Turkey’s identity more Islamic at home and more Middle Eastern internationally. All these factors presage a return to a multi-axial and less pugnacious foreign policy.

The new approach is already evident in Turkish efforts to facilitate talks between Ukraine and Russia, as well as its continued engagement with both the Taliban and their Afghan opponents. High-profile outreach to Armenia to establish diplomatic ties, and steps to reset relations with the United Arab Emirates, Saudi Arabia, and Israel reinforce the trend. Turkey has coordinated closely with Washington on Afghanistan and Ukraine, despite the Biden Administration’s April 2021 reference to the 1915 killings of Armenians as a genocide. It has also pursued a new F-16 fighter aircraft purchase to reinvigorate defense ties.

These moves are not meant to simply curry favor with the US or its allies. They are designed to pragmatically reduce tensions at a time of growing need for Western financial support and solidarity against revanchist powers, most notably Russia. Despite the lack of Western backing for Turkish efforts against the PKK, interests largely overlap regarding Ukraine and Afghanistan, as well as on Syrian refugees, Iraq, and Africa, where the Turkish presence provides a useful counterweight against Chinese influence. Turkey will continue hedging strategies with non-Western powers—especially other Turkic states, but also mid-sized partners in Africa, as well as Eurasia, South and Southeast Asia—yet shared interests present significant opportunities for a US-Turkish rapprochement that were extremely rare over the past decade.

Without wishing away the warts in Turkey’s ties with the US and Europe, the Biden administration must reciprocate the interest. The most concrete step would be Congressional approval of the F-16 purchase this year, not delaying to see if Erdogan loses the 2023 election. The US should also consider reinvigorating consultations with Turkey on overlapping areas of interest through the still-amorphous “joint mechanism” referred to by President Biden in October.

The results could provide greater stability in those regions despite US retrenchment. The new era of Turkish foreign policy presents a narrowing window of opportunity; keeping Ankara at arms-length will either push it back to unilateralism, or into a multilateralism favoring other great powers. A Turkey on better terms with Western partners may have more latitude to address some of the bilateral irritants most important to the US; as during the Cold War, liberalization might be the product of security and economic cooperation, rather than a prerequisite for them.

Col. Rich Outzen (Ret.) is a geopolitical consultant and retired foreign area officer who currently works as a senior fellow at the Jamestown Foundation. Soner Cagaptay is the Beyer Family Fellow at The Washington Institute and author of A Sultan in Autumn: Erdogan Faces Turkey’s Uncontainable Forces. This article was originally published on the CEPA website.

"The Pembe Konak (Pink Mansion) in Istanbul was once the headquarters of the Committee of Union and Progress, which, Zürcher notes, was “unloved under...
Read more
RESSOURCES