The PM2.5 limit set by Turkey's Ministry of Environment in its draft regulation is five times higher than the WHO limit values, experts warn. 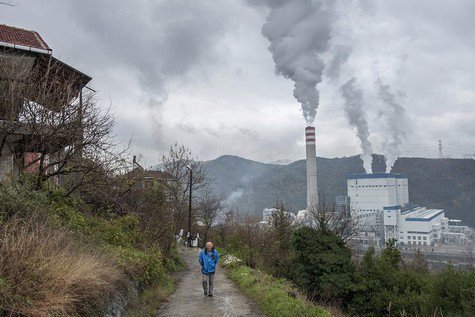 « Turkey was the 46th country with the most polluted air in the world in 2021, according to IqAir’s annual World Air Pollution report. The country’s ranking did not change from the previous year’s report » says Bianet English.

Some 97 percent of all cities in the world have higher air pollution than the limits set by the World Health Organization, shows the IqAir report.

The situation in Turkey

The Right to Clean Air Platform has been saying for years that Turkey needs to determine PM2.5 limit values. In its annual « Black Report, » the group examines air pollution in Turkey and its impact on public health.

Greenpeace Mediterranean, a constituent of the platform, has also been running a campaign for the determination of limit values.

Gökhan Ersoy, Greenpeace Mediterranean’s climate and energy project officer, said, « The findings that we have the most polluted cities in Europe confirm this demand. While it is a positive development that the ministry did not remain indifferent to this demand, it doesn’t fully meet today’s needs. »

The limit values in the ministry’s action plan were much higher than the WHO limits and the EU standards, Ersoy noted.

« We should update the target limit values ​​in the transition calendar for PM 2.5 before the regulation comes into effect. In this way, we can have a criterion that will take universal standards as a reference in order to declare protection zones in districts where regular limit exceedance have occurred for years. »

Deniz Gümüşel, the coordinator of the platform, said, « PM2.5, or fine dust particles smaller than 2.5 microns, are among the most insidious components of air pollution and are defined as a first group factor causing cancer in humans. »

« In the air quality guideline it updated in 2021, the World Health Organization determined more strict limit values for PM2.5, » she said. The WHO’s new limit value was 5 µg/m3 whereas the PM2.5 limit in Turkey’s draft regulation was 25 µg/m3 even for beyond 2029, she noted.

« So, in the coming years, our people will inhale 5 times more fine dust, at best, than the amount that poses a threat to human health. Our platform members expressed their views on the draft regulation. We will continue to monitor the process and warn the authorities about the new regulation, so that the air quality method will bring regulations to protect public health. »

Prof. Dr. Gamze Varol, a public health specialist with the platform, pointed out the limited measurements and insufficient data available to scientists about the issue.

« Measurements of PM2.5, which is proven to be carcinogenic, are very limited in Turkey, and the legislation with a limit value that meets universal standards is not in effect yet.

« The data in the IqAir report shows that our cities, where air pollution is chronic, are the most polluted in Europe. The health risk coefficient of the people living here is quite high.

« Scientists cannot share with the public the extent of health problems caused by this pollution in Turkey due to problems in accessing death and chronic disease data; they can no longer calculate preventable premature deaths due to air pollution. Tackling air pollution is the primary responsibility of governments. »

Dr. Melike Yavuz, another public health specialist with the platform, noted that air pollution is currently one of the most important public health problems.

It is also an important threat in terms of respiratory system diseases such as Covid-19 and influenza, she said, citing scientific studies indicating that the reproductive coefficient of the coronavirus is directly proportional with the increase of PM.25 intensity.