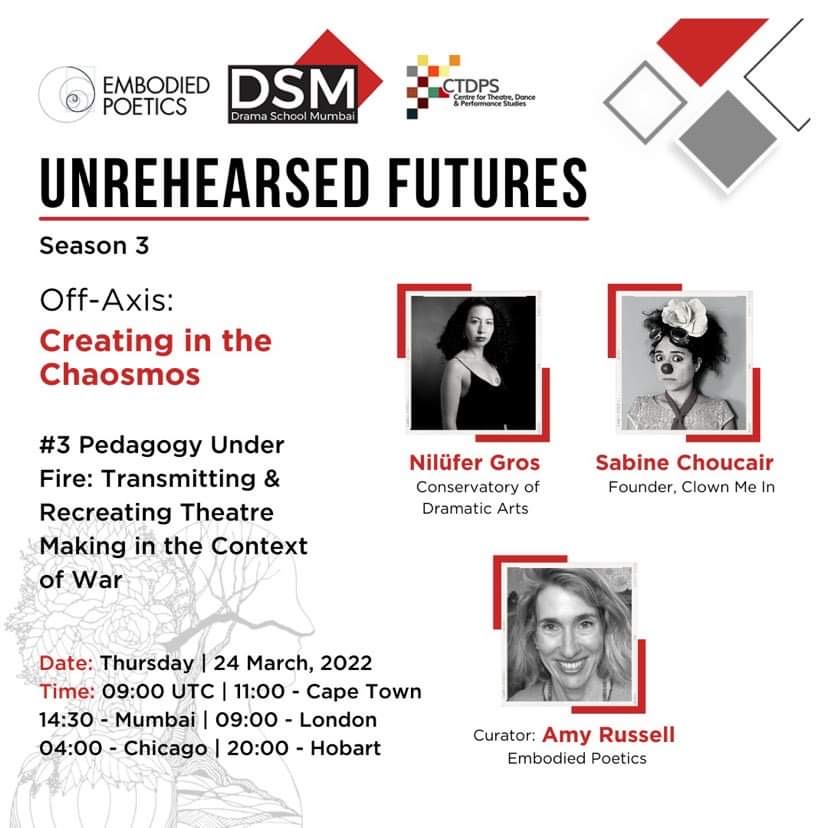 Nilüfer Gros (Mardin, Turkey) and Sabine Choucair (Lebanon) in conversation on making and transmitting theatre in the context of war.

Unrehearsed Futures is a series of public conversations about the realities of teaching and practicing drama in these changing times, held between global drama school heads, performance trainers, theatre makers and drama scholars.

What happens to theatre pedagogy, to students and teachers, and the very notion of drama, when the wider context is that of war? In this session of our season dedicated to ‘Creating in the Chaosmos’, we will discuss and share these experiences. While Sabine Choucair created a space of play in Beirut throughout times of conflict and upheaval, Nilüfer Gros practiced theatre as resistance to authoritarian suppression in Mardin, Turkey. Join us for this timely discussion.

Speaker: Nilüfer Gros
Organization / Specialisation: Doctorate Researcher, Conservatory of Dramatic Arts
Nilüfer Gros is currently a doctorate researcher at the Conservatory of Dramatic Arts (CNSAD, Paris). After a journey through İstanbul, New York and London, The London International School of Arts in 2008, she moved to Mardin, an ancient city and region on the Syrian border of Turkey, Northern Kurdistan area, where she established a theatre company and staged plays from testimonies, sonorities, myth and tales that she gathered from, especially women, in the region. Her work is informed by site-specific soundscapes and collective memory transmitted through bodies. Her experience living in this region, hit by stratified conflicts for hundreds of years, a crossroad of ancient cultures, and modern massacres (Armenian Genocide, Kurdish-Turkish Conflict…) inform her current work. She pursues artistic research on Mesopotamian women (in the past and today) as a model for political viscerality, searching for a way to stage the feminist impulse emerging from women’s corporeal memory and its traces in cultural performances (lamentations, storytelling, lullabies, ululations, utterances).

Speaker: Sabine Choucair
Organization / Specialisation: Founder, Clown Me In
Sabine Choucair is an award-winning humanitarian clown, director, and activist. She is the founder of Clown Me In, a group that uses the art of clowning to fight social injustice, and the International Institute for Very Very Serious Studies, a performance training program in Lebanon that focuses on engaged street theatre. She is certified in social therapy and performing arts from New York and London, with years of international experience combining therapy techniques with clowning and storytelling. She has produced and performed in hundreds of clown and storytelling performances in international festivals, theatres, refugee camps and communities experiencing trauma, in Lebanon, Jordan, Syria, Morocco, Tunisia, Mexico, the Balkans, Sweden, Germany, India, Brazil and the US. Choucair has also managed and performed various tours for Clowns Without Borders in Lebanon, the Balkans and Europe.

Call for Applications : GTOT 2023 Awards for Outstanding Theses and Dissertations in the Field of Turkic, Ottoman and Turkish Studies

Call for Applications: GTOT 2023 Awards for Outstanding Theses and Dissertations in the Field of Turkic, Ottoman and Turkish Studiesby Ayse Dilsiz HARTMUTH For the...
Read more
CULTURE