What Next After the U.S. Recognition of the Armenian Genocide? 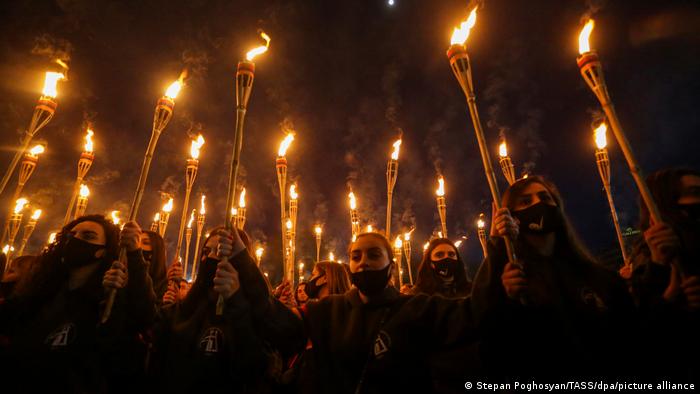 After decades of agonizing, a U.S. president has called the massacre and deportation of the Ottoman Armenians in 1915 and 1916 a genocide. Does it make a difference, and what happens next?

U.S. President Joe Biden’s dignified statement honoring the more than 1 million Armenians who died in 1915 and 1916 in the Ottoman Empire differed from those of his predecessors only in the use of one word: “genocide.”

The first thing to say is how much this means to Armenian Americans whose grandparents died in the slaughter in eastern Anatolia during those years. The Armenian diaspora after all is only a diaspora because of this tragedy. Nearly all the 2 million or so Armenians who were living in the Ottoman Empire were either killed or deported from their homes, and the survivors were scattered around the world. The historical record is absolutely clear.

WHAT THE WORD GENOCIDE REPRESENTS

Over the last fifty years, the word genocide has gradually become normalized as a term to describe the gravity of the “Meds Yeghern,” or “Great Catastrophe,” as it is known in Armenian. Not using the word has come to be felt as a denial of trauma by the descendants of those who lost their lives.

The Turkish authorities have tenaciously resisted the description, despite historical evidence to the contrary. Polish lawyer Raphael Lemkin coined the term genocide (in a 1944 book published by the Carnegie Endowment for International Peace) in the shadow of the Holocaust. Almost reflexively, Turks complain their forebears are being judged as Nazis by implication.

In Turkish citizens’ collective memory, the era of 1914–1922 is one of successive cataclysms as the UK, France, and Russia sought to destroy the Ottoman Empire. A total of 5 million people died in the empire during those years, vast numbers of them Muslims. The Turkish Republic rose from the empire’s ashes, virtually against the odds. Some Turks irrationally fear that the push to recognize the slaughter of Armenians as a genocide is a campaign to break up Turkey, just as the Christian powers did a century ago.

The Turkish-Armenian journalist Hrant Dink became Turkey’s foremost civil rights activist and did more than anyone else to educate Turkish society about the blank pages in its history and its lost Armenians. Dink opposed international recognition campaigns, arguing with great moral force that Turkey must first democratize and that would naturally lead to a true reckoning in the country where the killings happened.

Dink, showing acute psychological understanding of both peoples, memorably said, “Turks and Armenians and the way they see each other constitute two clinical cases: Armenians with their trauma, Turks with their paranoia.”

In the mid-2000s, progress was made in Turkey. Kurdish municipalities in eastern Turkey apologized to the Armenians and erect memorials to them. Groundbreaking memoirs were published and conferences were held.

Yet Dink himself was cruelly assassinated in 2007, and the civil rights movement he was part of has been all but dismantled. The far-right Nationalist Movement Party is now the key partner of Turkey’s ruling Justice and Development Party, and it espouses old bigoted arguments. In his response to Biden, Turkish President Recep Tayyip Erdoğan fell back on outdated nationalist rhetoric, alleging bizarrely that it was Armenians who killed Turks, rather than the other way around. In this political environment, it makes little difference for the United States finally to call a spade a spade. There may be some political fallout—though fortunately everything has been on the level of words not deeds so far—but the Ankara-Washington relationship is no longer that of close allies.

What happens now? Genocide is a noble but flawed term used for confusingly different purposes.

The first way it is used is as a legal term, as set out in the Genocide Convention of 1948. Some Armenian political commentators and activists, ignoring Biden’s words about seeking reconciliation, draw a straight line from the recognition of genocide to the pursuit of legal claims against Turkey.

The U.S. government (and most legal experts) argue, however, that the convention cannot be applied retroactively. Lemkin himself would seem to have supported this view. In his memoirs, he describes how in 1950 he approached the Turkish mission to the United Nations and successfully lobbied the Turkish government to be one of the first to ratify the convention. The clear implication of his recollections is that it was understood that this would not trigger the prosecution of Turkish perpetrators of crimes against Armenians, many of whom were still alive at that time.

This legal clarification will not deter Armenian lawsuits already under way. Yet it will undoubtedly be hard to prove legal claims dating back more than a century. In other historical cases, restitution of this kind has usually been a voluntary and symbolic act—an act the Turkish government will resist, but which some Kurdish municipalities have already performed.

The word genocide is also used as an angry weapon of identity politics. Many national elites instrumentalize the suffering their people have endured for political ends. In the last three decades, the term genocide has sometimes been used to stoke divisions in cases that do not rise to the severity of genocide, as the term is traditionally defined. This tactic is especially acute in the former Soviet Union. For instance, the term genocide has been employed in the Armenian-Azerbaijani rhetorical conflict—even though Azerbaijanis had nothing to do with the killings of 1915 and even though nothing that either side has endured since 1988 can properly be given that term.

The third use of the term is the one that Biden evidently intends in his April 24 statement: a synonym for mass killing and cultural erasure and the wholesale denial of human rights, which must be recognized to achieve reconciliation and closure. Biden’s statement locates the genocide in the past by calling it “Ottoman-era,” thus not pointing blame at modern Turkey. He stresses empathy for Armenian descendants and talks of “looking to the future” and of “healing and reconciliation.”

Such reconciliation looks very far off. Armenia and Turkey have no diplomatic relations, and that is unlikely to change anytime soon, following Turkey’s support for Azerbaijan in the recent war over Nagorny Karabakh. If anyone can a point a way forward, perhaps it is academic scholars. The historiography of the Armenian Genocide and this era has grown vastly more sophisticated, thanks in large part to the unprecedented collaboration of Armenian and Turkish historians, including Taner Akçam, Halil Berktay, Fatma Müge Göçek, Gerard Libaridian, and Ronald G. Suny. This new round of scholarship has conclusively discredited denialist Turkish theses. It also now contextualizes and explains what happened—but does not justify it—within the framework of the end of the Ottoman Empire and World War I. Old stereotypes of “terrible Turks” have been dispensed with in favor of real history.

Historians can further fill out the full dreadful story of the years between 1914 and 1921. The Armenian Genocide was the most terrible crime in the sense that the Armenians, and also the Assyrians, were not only killed but also had their culture destroyed. Other stories can be told properly too, including those of the Sunni Turks, Kurds, and Azerbaijanis who suffered at the hands of great power armies in those years and sometimes at the hands of vengeful Armenians too. Another painful history is that of the Pontic Greeks, whose enforced exile from Turkey marked the close of this era in 1923, as Muslim Turks came the other way from Greece.

Armenians could contribute to this filling out of history by opening the still-restricted archives in Watertown, Massachusetts, to share the historical records of the Dashnaktsutyun (or the Armenian Revolutionary Federation), which ruled Armenia from 1918 to 1920.

For now, this is a time for mourning and remembrance in Armenian-American families, no longer having to worry that a feeling of official equivocation hangs over the fate of their loved ones.