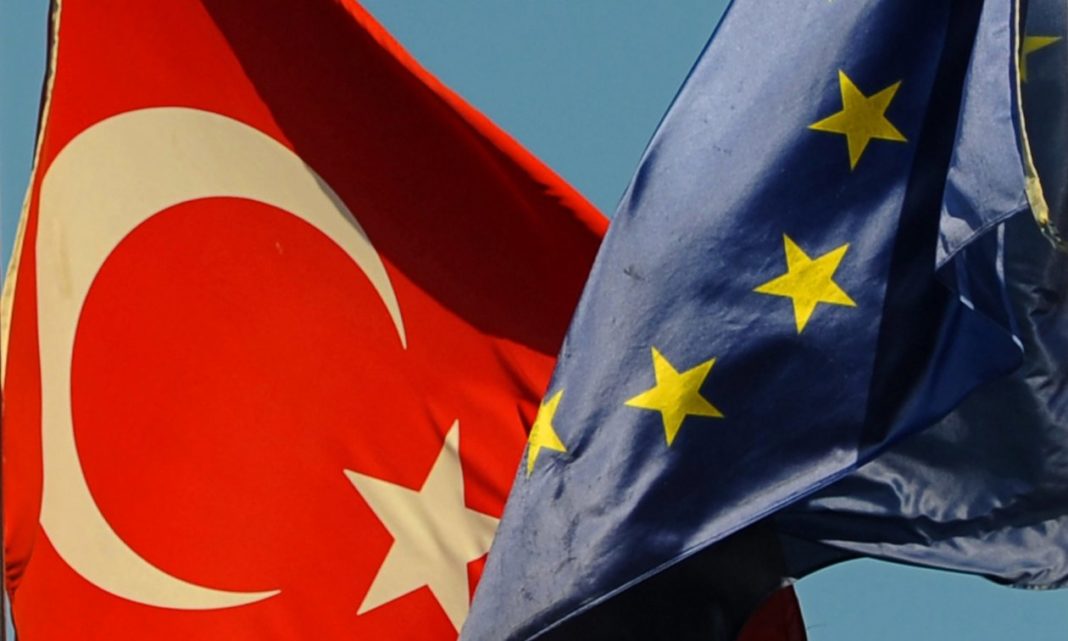 Turkish rulers today take every opportunity to disregard EU’s fundamentals in order to claim the country’s singularity if not superiority. The EU paradigm has become a liability in front of an increasingly authoritarian regime in which the arbitrary of the one-man rule has become the rule. The trend has accelerated since the shadowy coup d’état of 15 July 2016 when the regime blessedly (sic) took the opportunity to suppress any meaningful dissent.

As of early 2021, the EU membership perspective has disappeared from Turkey’s agenda. Centuries-old anti-Westernism of Turkish politics now rides the waves and Europe/West-bashing has become the favourite topic of Turkish political life. Ankara, through its actions and declarations rejects the membership even when it pays lip service to lure “hot money” lenders or to charm Turkey-appeasers in Europe. As for the opposition unfavourable views of the EU and the NATO are commonplace.

Technically speaking, in addition to the abolition of the Ministry in charge of EU affairs in July 2018, ministerial sub-committees in charge of EU preparations have been dismantled. The pre-accession funds (€4,453 billion for the EU budgetary period for 2014–2020) are severely underutilized, by 10 percent, due to lack of adequate projects. The negotiations are at standstill with 14 chapters out of 35 blocked; there was no progress on the 15 chapters theoretically under negotiation; only one chapter’s negotiation is done.

Commission’s Progress Reports on Turkey’s advancement toward membership look like “regress reports,” which are duly ignored by Ankara. Relations with the EP are reduced to recommendations to freeze or suspend the negotiations. Now Europarliamentarians are, with very few exceptions, against Turkey’s membership, especially since the referendum of April 16, 2017 when the hyper-presidential system was adopted.

Bilateral relations with the EU member states’ politicians and public opinions are at the lowest, where any non-complacent declaration or action is countered with accusations of “Nazis” and “Fascists” by the Ankara regime. Some governments have introduced in their governmental action plan the rebuttal of Turkey’s membership, like Austria and Germany. Paris has directly told Ankara about the same wish. Every European decision maker knows that, in Brussels’ terminology Turkey does not comply anymore with the Copenhagen Criteria, the compulsory benchmark for every candidate country. There isn’t one government or public opinion in favour of Turkey’s EU membership left.

Such state of affairs has been translated into a Council conclusions on June 26, 2018, two days after the presidential election, which completed the regime change.

“The Council notes that Turkey has been moving further away from the European Union. Turkey’s accession negotiations have therefore effectively come to a standstill and no further chapters can be considered for opening or closing and no further work towards the modernization of the EU-Turkey Customs Union is foreseen,” it said.

The declaration is short of formal end of membership negotiations, as it looks difficult to reach the unanimity, some member states fearing from publicly antagonizing Turkey for a variety of reasons. Nevertheless, Turkey’s exclusion is indirectly mentioned in several official documents. Finally, there is no more political dialogue on issues of common concern except ad hoc deals such as the Flüchtlingsdeal.

Membership negotiations now put aside by a tacit agreement of parties, there remain two issues on which Ankara seems adamant: The revision of the Customs Union and the Schengen visa waiver for its citizens.

Into effect since January 1, 1996 the Customs Union needs to be revised since long. Advantages Turkey has acquired then, have been eroded over years. Also, the Customs Union was always a step before full membership; short of membership it becomes meaningless. Anyway with the deep-freezing of formal relations it becomes irrelevant to go ahead with any revision.

Those in Europe who still dream to condition the revision of Customs Union with economic and political good governance are forgetting how anti-European regime’s codes are. Within these bleak perspectives, remains the new generation of agreements with third countries, modelled on the EU-UK Trade and Cooperation Agreement.

As for the exemption from Schengen visa for citizens of Turkey, the ultimate obstacle remains political. The presence of Turkish nationals among the ISIS ranks, a growing Islamophobia and Turcophobia, huge numbers of unemployed as well as potential Turkish asylum seekers whose number is increasing due to the political situation, are taken into account by the EU policymakers, thus preventing any positive outcome.

Now that the prospects of membership, the likelihood of Customs Union’s revision and visa exemption have become remote, many Europeans are enthusiastic to interact with the regime on a transactional basis as in Flüchtlingsdeal. Turkey is thereon just another third country for the EU, independent from the way it’s being ruled. The unique difference is its geographical position as well as its transatlantic ties.

Nevertheless EU cannot easily close ad hoc deals pertaining to its interests and its security with a Turkey that does not feel bound by any membership or partnership obligation. From now on, it is impossible to bet on its EU (and NATO) commitments to, for instance, ease tensions with neighbours as the failure of the EU membership bid cancels the achievements of last twenty years in terms of good bilateral relations with member states, particularly Greece. The bellicose rhetoric and actions of last years against a number of EU countries, politicians, and citizens are strong signals of a centrifugal drive.

Unilateral Turkish moves are not limited to political or diplomatic relations. Today two mammoth infrastructure projects that have a direct impact on EU countries and which require due environmental impact assessment are going ahead without it. These are the “Akkuyu Nuclear Power Plant” built, not surprisingly, by Russia’s Rosatom, across Cyprus and situated in an earthquake zone. The other is the so-called “Crazy Project”, an artificial waterway next to the Bosporus, considered by scientific community as potentially lethal for the entire Black Sea basin, its riparian countries including the rivers feeding it, the Marmara Sea, and beyond.

As for the Flüchtlingsdeal, one should note that although the wild movements of summer 2015 have now been checked, the movement of refugees and migrants continues at a steady pace toward Greece. There is not much room to reverse the migratory potential for all those stranded in Turkey without any decent future. This goes for Turkish citizens as well. Not to mention the migratory potential created by the Turkish invasion in Syria. Thus, the pressure will continue until genuine repatriation prospects come forward for Syrians. In other words, until the time the role of Ankara in keeping alive the refugee-like situation in Syria by fuelling the civil war, will cease.

The Flüchtlingsdeal on the other hand, is a textbook example of EU’s transactional approach in the post- candidacy era. When asked about the seizure of the Zaman media group by the regime in March 2016, happening right then, German Interior Minister Thomas de Maizières coldly announced, “We are not a referee regarding human rights.” That was a turning point when EU stopped considering Turkey as a future member with obligations and duties. In fact, the last negotiation chapter was opened on June 2016 and that was it.

Last October, Angela Merkel valiantly fighting to block sanctions against Ankara while pushing to impose sanctions on Minsk, affirmed that the latters were an “important signal” to those who stand in the way of democracy…in Belarus! Sanctions against Ankara were not even related to any democratic shortcoming. Despite the fact that both societies suffer under dictatorships  and both try to resist them, the EU empathizes with Belarusians but openly ignores Turkish citizens more than the lip-service filled with an assortment of “concerns”. Last January Heiko Maas, in Ankara bluntly reaffirmed his government’s position by declining to answer questions relating to the rule of law, qualifying them as “internal matters”.

It’s essential to grasp Berlin’s noxious role. Satisfied with the de facto end of membership prospect, Berlin is not shy to be a full partner of Ankara. The Chancellor has developed a special relationship with her counterpart, paid ten visits to Turkey, a record among Western politicians. The visit of October 18, 2015, right before the snap elections of 1 November, left a bitter taste. The country was shocked by the cold-blooded murders of Kurds by security forces and a string of ISIS attacks that were possibly engineered by the government, to reverse the loss of the previous elections, on June 7. She kept coming as part of her Faustian pact with Erdoğan, three times in 2016, when the country was politically and morally devastated.

As Merkel kept visiting and receiving Erdoğan in Germany, Ankara’s abuses became blatant. But neither the totalitarian drive at home, nor the aggressive moves in the Aegean, Eastern Mediterranean, Iraq, Libya, Syria, and the regional sponsorship of jihadism deterred her unconditional support. (if he becomes Chancellor Armin Laschet would most likely adopt the same policy line)

The EU is now embarked upon a full appeasement policy led by Berlin with the strong support of Bulgaria, Hungary, Italy, Malta, Poland, Romania and Spain. The “Axis” has invented a new gimmick called “positive agenda” which is supposed to become the nth blueprint for EU’s relations with Turkey. Empty rhetoric on reforms, pro-EU utterances and tactical retreats from confrontational moves abroad, are taken for granted by the pro-Ankara Axis. So, appeasers refuse to diagnose that Ankara’s modus operandi contradicts EU’s norms, standards, values and principles which are just obstacles to the “smooth” functioning of the regime. This is also why Ankara regime can never be reformed.

But behind the window dressing there is a concrete cynical agenda of five sets of reasons to engage with Ankara. Europeans are terrified by the prospect of losing “NATO partner Turkey” to Russia, of jeopardizing their economic interests in Turkey, of risking the Flüchtlingsdeal, of provoking aggressive elements of Turkish diaspora and of accelerating Turkey’s implosion.

Alas, appeasement is not the adequate answer to these angsts. Actually the more the EU appeases, the more Erdoğan uses and abuses the very angsts, and the more his regime’s lifecycle gets extended. For the matter, is there any serious European policymaker who dare, without hesitation, to say that a “Russian S-400 client” Ankara is still a reliable NATO ally?

Ankara regime has become a security issue for Europe and the West, which needs to be properly and urgently addressed. While Europeans are not prepared to reckon with, the new U.S. administration might once again show the way.