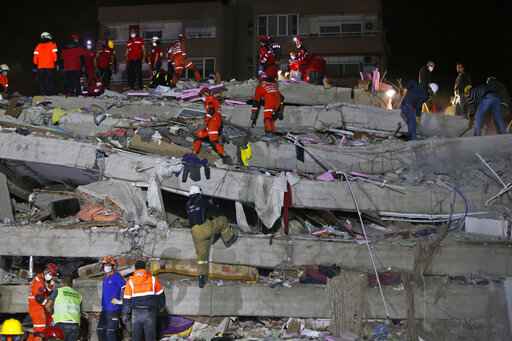 After the powerful earthquake in Izmir the death toll has risen to 109, the Disaster and Emergency Management Authority (AFAD) has announced. Rescue efforts are still continuing in five collapsed buildings, according to the AFAD.

As stated by AFAD, as of 2 November 2020, 1,036 people were injured with 898 of them discharged from hospitals while a total of 138 people are currently being treated at medical facilities. 12 of those receiving treatment were in intensive care while five others were in critical condition.

The magnitude of the earthquake was updated from 6.6 to 7.0

The magnitude of the earthquake was announced as 6.6 by the AFAD, 6.9 by Boğaziçi University’s Kandilli Observatory and Earthquake Research Institute and 7.0 by the United States Geological Survey (USGS).

Nine people have been detained

The İzmir Chief Public Prosecutor’s Office has opened an investigation regarding the collapsed buildings and issued detention warrants against 11 people, including contractors. “Nine people have been detained so far while two are sought by the police. Four engineers of record, two contractors, one grocery store owner and one property owner are among the detained.” said on website Bianet. (AP Photo/Emrah Gurel)