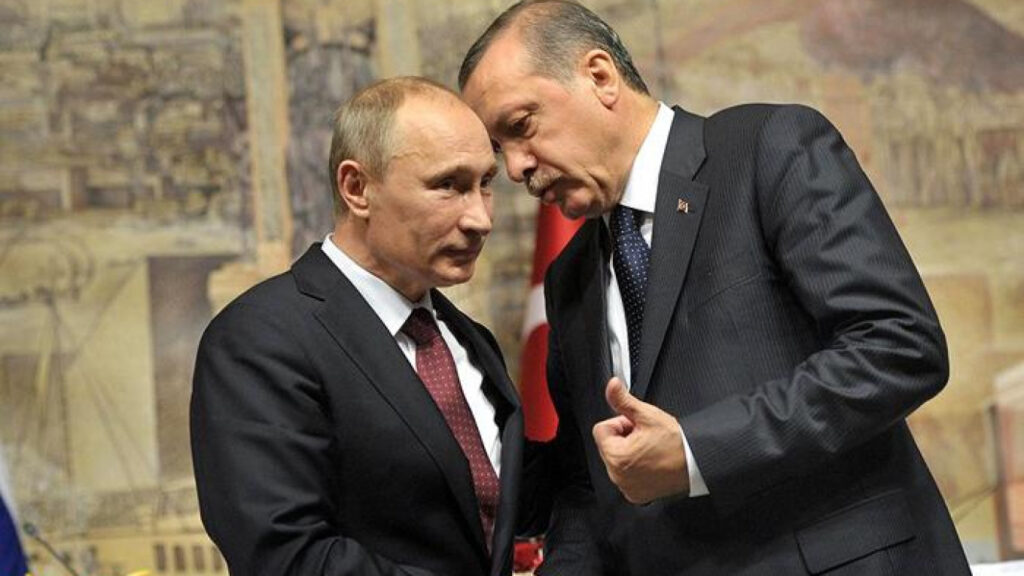 « The Turkish, Iranian and Russian leaders are set to meet in Tehran next week amid lingering Turkish threats against Syrian Kurdish groups. Putin and Erdogan will separately discuss the Ukrainian grain crisis » says Ezgi Akin in Al-Monitor.

Turkey’s President Recep Tayyip Erdogan and Russian leader Vladimir Putin are set to meet in Tehran next week, with Ukrainian grain exports and a potential Turkish operation in Syria likely to top the agenda.

Kremlin spokesman Dmitry Peskov said today that Putin would visit Iran on July 19 to attend a three-way summit between the Turkish, Iranian and Russian leaders and he would also hold bilateral meetings with both leaders on the sidelines.

Ankara’s efforts to facilitate a UN-led initiative for a Black Sea naval corridor to export grain from Ukraine is expected to be a top agenda item in the bilateral talks between Putin and Erdogan. The meeting will follow four-way talks in Istanbul set for Wednesday. Turkish, Ukrainian and Russian military delegations as well as UN officials would discuss safe export of Ukrainian grain, Turkey’s Defense Minister Hulusi Akar said today.

The UN has cautioned against high expectations as the international community warns of a looming global food crisis if the efforts fail.

« We are working hard, indeed, but there is still a way to go. Many people are talking about it; we would prefer to try to do it,” United Nations Secretary-General Antonio Guterres said today. Ukrainian officials say ​​400 million people worldwide depend on Ukrainian grain exports.

Russia insists Ukraine needs to de-mine its ports for exports to start. Ukraine, in turn, presses for security guarantees, demanding that third-party countries and the UN prevent Russia from launching amphibious assaults on its shores once the waters are de-mined.

“Russia’s leverage for either exacerbating or alleviating the looming food crisis is big,” Maxim Suchkov, non-resident scholar at the Middle East Institute, told Al-Monitor. According to Suchkov, Moscow wants to prove it has not caused the grain crisis, and Turkey seeks « to establish itself as the go-to” in the talks.

“Here again Putin and Erdogan’s intentions found a common position while pursuing somewhat different interests,” he said, adding that Turkish-Russia cooperation for a safe naval corridor is also “in the interests of both parties.”

The grain crisis has already led to a strain between Ankara and Kyiv last week, after Turkish authorities freed a Russian ship that Kyiv charged was laden with grain from Russian-occupied territories, despite “criminal evidence presented to Turkish authorities,” Ukraine’s Foreign Ministry spokesman Oleg Nikolenko lamented.

The four-way talks in Istanbul will come after Erdogan discussed the efforts with Putin and Ukrainian leader Volodymyr Zelenskyy in separate phone conversations on July 11.

Erdogan told Putin “that the time has come to take action on the UN plan to set up safe corridors for grain exports in the Black Sea,” according to an official readout by Turkey.

The two leaders also “discussed the situation in Syria,” the readout added as Turkish threats for a fresh military offensive against the Kurdish groups in northern Syria are still lingering. Erdogan will likely press Putin and Iranian President Ebrahim Raisi to support the operation.

Ankara recently dialed down its threatening rhetoric over a potential operation against the Kurdish groups — major allies of the US-led international coalition forces in combating Islamic State — amid absence of Russian and American greenlights. Erdogan last week that his country was “in no rush.”

Yet the Kurdish-led self-rule in northern Syria has declared a state of emergency, citing the expected incursion. On July 10, Akar reiterated Ankara’s threats, saying that the Turkish troops have been subjected to “serious harassments” from Tel Rifaat and Manbij, the northern Syrian towns that Erdogan pledged “clear of terrorists” last month. Tel Rifaat seems a less likely option given its proximity to the Shiite-majority towns of Nubl and al-Zahra where pro-Iranian forces are located.

Akar said that it was “out of question” for Turkey to heed calls from foreign capitals to not to carry out this operation, adding that “talks with the relevant parties and people” are ongoing.

“I’d expect some horse-trading in the coming talks,” Suchkov said, pointing to the Russian and Iranian statements leading Turkey to the negotiation table.

Turkey failed to obtain green lights from its Astana partners for an all-out operation during the latest round of talks in Kazakhstan last month.

Yet is a limited operation in Manbij possible?

According to Suchkov, the answer depends on three factors: Whether such an operation would complicate Russia’s own presence and political influence in Syria; whether it would mean a confrontation between the Turkish troops and Syrian government forces; and the position of Tehran.