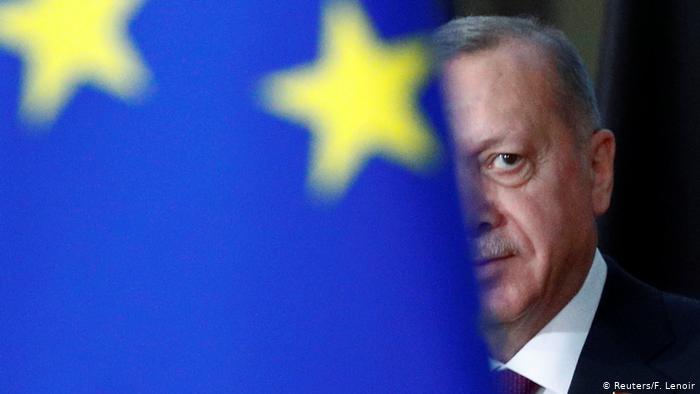 This new paradigm that steers relations in the post-candidacy era, is clearly devoid of a value-based and rules-based interaction.

But the lip service is always superseded by a sense of “self-service”, ranging from the NATO membership imperative, the 2016 “Refugee Deal”, the economic stakes of EU companies in Turkey, due to the fear of an implosion which would lead to colossal disruptions in the region at large.

The magic recipe, combining the lip service and the self-service, is appeasement, wishy-washy deals, packed in formulas, which are repeated once again in the council conclusions of June 25th.

Or for that matter, in the conclusions – detailed in 79 points – of the recent NATO Summit, which took place on June 14th.

It was appalling to notice that countless points of the conclusions were in contradiction with the behaviour of Ankara, be it respect for the rule of law, relations with other NATO members or actions against the alliance’s military and political integrity, as seen in its ongoing flirtations with Moscow.

Let us go through some of the news preceding the European Council meeting:

Turkey’s Constitutional Court accepted an indictment to shut down the second major opposition party of Turkey, pro-Kurdish Peoples’ Democratic Party (HDP), which was backed by the votes of about six million citizens of Turkey in the last parliamentary elections in 2018.

The indictment demands a five-year long political ban of 451 active politicians of the HDP.

Ankara also announced the Aegean as “a zone for military training, after diplomatic efforts to persuade Greece to reverse course failed”.

Turkish President Recep Tayyip Erdoğan is trumpeting now a so-called two-state solution in the ethnically divided island of Cyprus, and is preparing for the opening ceremony of a military airbase in the Turkish occupied north of the island on July 20, the anniversary of the 1974 Turkish military operation. Meanwhile, works to re-build the forbidden zone of occupied Varosha on the island continue unabated.

Ankara recently rejected one of the key conclusions of the Second Berlin Conference on Libya on June 23rd, which had called for the immediate withdrawal of “all foreign forces”.

Around the same time the President of the European Commission Ursula van der Leyen tweeted:

“Good conversation with President, prior to the EUCO on Thursday. We discussed the state of EU-Turkey relations, COVID19, Trade and the Customs Union, the situation in the eastern Mediterranean, migration and developments in Afghanistan.”

She was referring to the above-mentioned European Council.

So, the president of the European Commission talked with Turkey’s “dictator,” described as such by the Italian Prime Minister Mario Draghi, referring to Erdoğan’s defiance on anything and everything that have to do with European values, principles, norms and standards.

Perfectly in line with German Chancellor Angela Merkel, Ursula von der Leyen, who is German herself, and her representative in Ankara, Nikolaus Meyer-Landrut, parrot the position of Germany, a position that has slowly become the trademark of EU-Turkey relations.

This position works to appease and avoid angering the dictator, pretend that his tactical moves in Aegean and the eastern Mediterranean are sufficient enough to engage with his regime, disregard his other external abuses in Iraq, Libya and Syria, pay lip-service to regime’s domestic abuses, keep the country within NATO at any cost, commerce as much as possible and, give the false impression that Turkey is still an EU partner, worth engaging with on issues like the revision of Customs Union and even worth preparing for membership.

A “masterpiece” in the same line has recently been penned to describe this policy by the State Secretary of the German Federal Foreign Office, Miguel Berger, in which he very clearly describes EU’s yardsticks to engage with Ankara regime: The military de-escalation in the Aegean and the eastern Mediterranean and the continued policing of Turkey’s borders to keep the refugees in the country.

The rest, namely the massive human rights’ abuses and the dissolution of the rule of law are pushed aside. The author openly “regrets of having been obliged” – in Germany’s capacity of chair of the Committee of Ministers of the Council of Europe – “to call on Ankara to respect the rulings of the European Court of Human Rights.”

This one is definitely a must-read piece!

Alas for Miguel Berger, while Berlin is gratifying Ankara for behaving on the seas,  it indirectly encouraging its “best pal” stance to sustain its bellicose actions by providing sophisticated armament to Ankara. Indeed when Greek Defence Minister Nikos Panagiotopoulos asked his German counterpart Annegret Kramp-Karrenbauer to suspend the agreement for six type-214 submarines built by Thyssen, his request was flatly rejected.

Let us go through some more concrete examples of EU’s dystopic words and erratic deeds regarding Turkey:

In Ankara, the delegation of the EU, headed by Meyer-Landrut, formerly a top aide to Merkel, now seconded to EU External Services by the German Federal Foreign Office, kept repeating that “Ankara is still a candidate country.” Thus, Berlin’s CDU/CSU governmental action plan for September elections has once again been affirmed:

“Turkey’s full membership to the EU cannot be achieved with us. Instead, we desire a very close partnership agreement”.

Meyer-Landrut’s office in Ankara is indeed involved in a series of absurd projects with the Turkish bureaucracy, such as the promotion of an alternative dispute resolution in Turkey launched on June 10. The project aims to support the effective implementation of alternative “dispute resolution” methods in order to reduce the considerable backlog in the Turkish judiciary, when in fact the entire judicial system is subordinated to the strongman!

Another dystopic endeavour, among many others, was the “Technical Assistance Project for Increasing Ethical Awareness among Elected and Non-Elected Local Government Officials,” whereas the regime is the sole appointer of all civil servants, on the basis of not merit but sheer loyalty!

And when the country is shaken every day by waves of revelations and allegations of corruption, embezzlement, illicit financing or misappropriation by public officials.

At the closing ceremony of this ridiculous project, Meyer-Landrut cynically uttered the following:

“We attach great importance to this project, as we believe in the crucial role the Council of Ethics plays in embedding ethics and combating corruption within the local administrations”.

One definite outcome of the EU’s project, as a matter of fact, is the total lack of ethics, adding insult to injury!

“The European Council condemns and rejects any attempt by third countries to instrumentalise migrants for political purposes,” it says in the 13th paragraph.

This is a direct reference to Ankara’s use and abuse of refugees without mentioning it. Nevertheless, this paragraph didn’t prevent the EU to go ahead with additional cash to Ankara (circa 3.5 billion euros).

In paragraph 24: “The European Council calls for progress on the inclusive and Libyan-owned political dialogue and for the withdrawal without delay of all foreign forces and mercenaries.”

It is by now very well known that, the main stumbling block before the withdrawal of foreign forces and mercenaries is Ankara’s refusal to withdraw its forces.

On paragraph 16: “…it takes note of the start of work at technical level towards a mandate for the modernisation of the EU-Turkey Customs Union and recalls the need to address current difficulties in the implementation of the Customs Union, ensuring its effective application to all Member States”.

This is the most mocking decision. Even if by miracle the modernisation is completed at the end, Ankara’s application of the Customs Union to the Republic of Cyprus – which Turkey does not recognise – remains out of question.

When it comes to Turkey, as well as other autocracies, the EU “self-importantly” vacillates between a cowardly appeasement, dirty deals, sheer falsehoods and utter cynicism.

This is a rather indigestive outcome given what Josep Borrell, the man in charge of the so-called “EU’s foreign policy”, used to say:

“EU must develop appetite for power”!

Al-Monitor, July 22, 2021, Fehim Taştekin Unless he is playing a game of brinkmanship to force the Greek Cypriots into a settlement, Erdogan’s tough moves...
Read more
ARTICLE A LA UNE