Fehim Taştekin: « If you criticize Turkey’s border policy, you are a traitor » 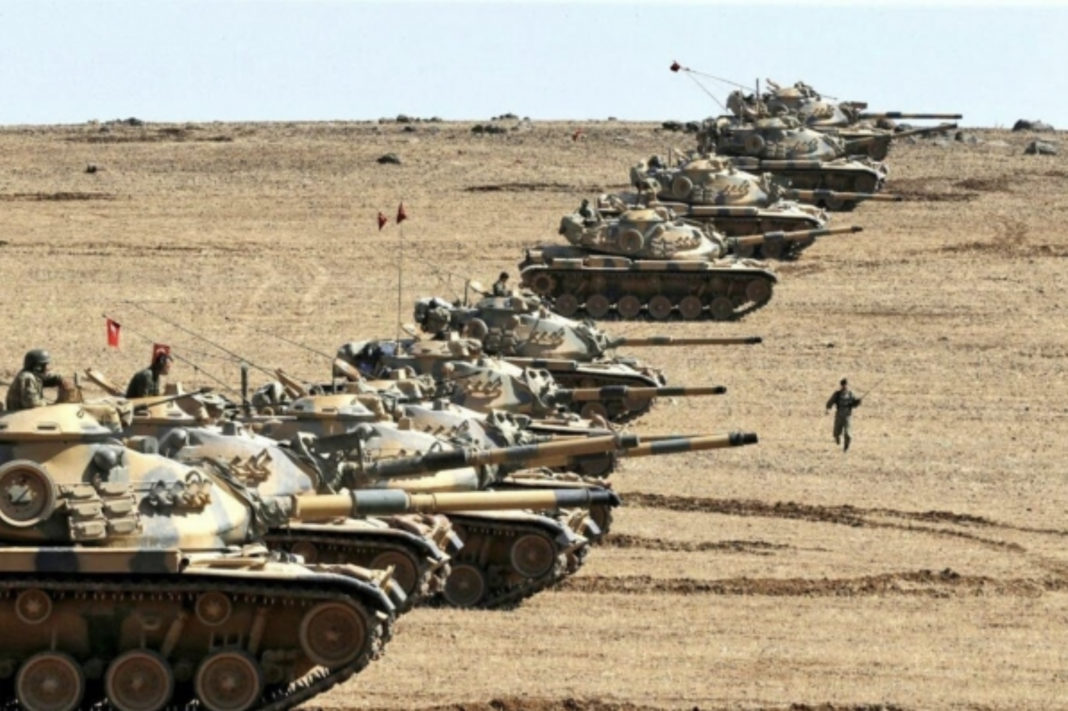 « After Turkey lost two soldiers in Syria last week, Turkey’s Defense Minister went to the boarder and stated that, “revenge of our martyrs has been taken.” However, while an organization thought to be the screen of al-Qaeda-aligned structures in Idlib claimed responsibility for the bombing, Turkey instead indiscriminately strikes Kurdish areas. » says Fehim Taştekin on Duvar.

Turkey lost two more soldiers in Syria last week. For the sake of what? Is there any justifiable cause that has not been poisoned by nationalism and heroism? Any reason left for unifying the nation? A government that feels responsible for the losses? “Those who die are martyrs,” they say. “Whoever questions this is a traitor.”

Defense Minister Hulusi Akar always goes to the border region with the joint chiefs of staff after a fatal attack and says, “The revenge of our martyrs has been taken.” The Turkish state has shown its strength. It is like a ritual and it has been repeated after this most recent attack.

Who has the revenge been taken out on? It is Idlib in Syria where the Turkish military convoy was attacked. The place was Binnish, in the Kafriya district of Idlib, where Turkish Armed Forces (TSK) shields jihadists via military bases. It is the heart of the major shield. The Ansar Abu Bakr al-Siddiq Brigade claimed responsibility for the bombing. This organization is thought to be the screen of al-Qaeda-aligned structures in Idlib that oppose the de-escalation of tensions with Turkish-Russian agreements, trying to sabotage the opening of the M-4 road within this framework, and accuse the jihadist delegation Tahrir al-Sham (HTS) of cooperating with Turkey. This organization had previously claimed responsibility for attacks on Turkish military convoys on March 15 and May 11.

Turkish soldiers are usually shot in Idlib and the TSK revenge is taken at villages around Manbij, Tell Rifat, Ras al-Ayn, and Tell Abyad. In other words, Turkey is indiscriminately hitting Kurdish areas as well as positions held by the Syrian Democratic Forces (SDF) and the Manbij Military Council. Sometimes, TSK hits the Syrian army. In recent days, it was Tell Rifat and Maraanaz in northern Aleppo, Manbij villages as well as several places in Tell Abyad, that were among those bombed by the TSK.

Minister Akar also frequently says at border posts that, “Our borders are our honor.” It is the border where armed groups have been easily going in and out since the beginning of the intervention in Syria, and which TSK and National Intelligence Organization (MİT) elements have monopolized since 2016. The border is our honor, but at the same time all kinds of menace have been introduced to neighboring territory from our borders, as well as contributing to the formation of hundreds of armed organizations, including their training, arming, and coordination.

An alternative Syrian National Army has been formed from these groups. While almost all of these groups formed a criminal network, Turkey watched. The Turkish army was forced to adopt the same causes as the jihadists, becoming their shields, ultimately turning Idlib into a ‘jihadistan.’ There was nothing wrong with the Turkification of these places. “The border is our honor,” but this concept has nothing to do with the violation of the borders of the neighboring countries, their sovereignty, and territorial integrity.

Since 2016, Ankara has pledged to reaffirm its commitment to Syria’s sovereignty and territorial integrity, as well as to fight terrorist organizations, in all its declarations in accordance with the Astana process. This is an unrealistic and baseless policy.

Let’s return to the point when all these scandalous affairs began. It was only a couple of days ago when it was leaked to the press that the intelligence chiefs of Syria and Turkey, mediated by Baghdad, would meet. They emphasized that there was consensus with Damascus on the PYD, the Democratic Union Party. Damascus has repeatedly denied reports of the meeting. They think they were going to corner Damascus by reprinting an old photo, but the conditions of 2011 are no longer applicable. Everyone involved in Syria is now reviewing their position.

Even the developments in the past weeks show that Ankara is far from grasping the futility of turning the wheel with loose gears.

President Bashar al-Assad is hosting delegations in Damascus. The formula, developed as a solution to Lebanon’s electricity and gas problem, required shaking hands with Damascus. The United States has agreed to the transfer of Egyptian gas and Jordanian electricity to Lebanon via Syria, loosening the knot it had put around Syria’s neck with the Caesar Act.

The first official visit from Lebanon to Damascus took place on this occasion. Syrian, Egyptian, Lebanese and Jordanian cabinet ministers met in Amman. That could be considered a split in Damascus’ diplomatic isolation. Assad hosted a large delegation led by Druze politician Talal Arslan, who has served as a cabinet minister in Lebanon six times. Arslan also sent a message that “President Assad fought on behalf of all of us against international terrorism.”

On the other hand, the Russian-American dialogue is moving forward even though there are some uncertainties. The U.S. has closed its Afghanistan chapter in disgrace. They shook hands with Baghdad to withdraw their combat forces from Iraq by the end of the year. They withdrew Patriot missiles from Saudi Arabia. They have shown flexibility regarding the Lebanese-Syrian line.

This flexibility played a part in the formation of a government in Lebanon 13 months later, headed by Najib Mikati. As a result, France took over when the U.S. gave the green light. Following President Macron’s meeting with Iranian President Raisi, Tehran put pressure on Hezbollah and its allies and Paris put pressure on others. Through this, a government was finally formed. We can say that the Mikati government has a character that is winking at Syria. After France’s Total signed 27-billion-dollar investment deals in Iraq, Paris cannot ignore competing sensitivities on the Iran, Iraq, Syria, and Lebanon lines. The French-American teamwork in the Middle East and the softening of the atmosphere through Russian-American dialogue can facilitate relations between Damascus and the Arabs. In its recent statement on September 9, the Arab League urged Turkey to withdraw from Libya, Syria, and Iraq. While Turkey is trying to normalize relations with Egypt, Saudi Arabia, and the United Arab Emirates, it cannot ignore the Arab objection it faces in the Syrian file.

The only argument Ankara can use is “I will not allow a terror corridor.”
This is an exaggerated, manipulated and distorted reasoning. It is an attempt to justify the continuation of the failed Syrian policies of Turkey focused on overthrowing the regime, also trying to erase the image of a country supporting ISIS. It is also for the purposes of persuading the domestic public to a one-man regime and nurturing the nationalist transformation of the values of society. Any criticism of the border policy, military deployment and logistical support channels that give life to jihadists in Idlib are also suppressed by this argument.

The Russians have been busy with the rekindled Deraa front in the south for some time. Last week, a new agreement was reached with the armed groups there. If peace is achieved and Damascus and its allies head back to Idlib, this could be a more dangerous escalation for Turkey compared to previous ones.

Yet, there is still a desire to sink deeper into the swamp: Against the Syrian Arab Republic, which has kept its seat in the UN, and its embassy and consulate in Turkey were not closed, there was the “Syrian National Army” which was declared flamboyantly. It is, at the same time, apparent that this is an army of evil made up of gangs, looters, usurpers, racketeers, kidnappers, murderers, and torturers. But our regime is still determined to dwell on it. A couple of days ago, they created a new umbrella group called the “Syrian Liberation Front” to keep the prominent five of them under control. They are supposed to stand shoulder to shoulder with TSK in the Euphrates Shield, Olive Branch, and Peace Stream regions against terrorism! These five organizations established the Azm Operations Room last July. Apparently, when Mohammed al-Jassem, known as Abu Amsha, the commander of Sultan Suleiman Shah Brigade, who seized the Afrin booty, started to show a tendency to join the HTS, the Turkish intelligence had to re-blend these organizations. Since each of the organizations have become warlords wherever they have held, they have a hard time establishing an integrated and functional security net.

Over the last 10 years, almost all countries have shifted to a different position, except for Erdoğan’s Turkey. In this context, the effort to normalize relations with the Arabs has no leg to stand on. Syria was the starting point of deviation and deterioration. Correcting the mistakes there may be the beginning of normalization.