Podcast : “Italian Empire And The Dodecanese ” With Valerie Mcguire 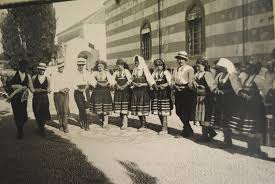 “The Dodecanese Islands in the Southeastern Aegean Sea are part of Greece today, and for centuries, they were controlled by the Ottoman Empire. But for a brief period, Italy governed the Dodecanese as part of its empire under the Fascist government of Mussolini. In this podcast, we talk to historian Valerie McGuire about the history of Italian Empire and the ignored importance of the Dodecanese Islands within the study of colonialism writ large. We explore how the islands changed under Italian rule and the creation of a special nationality known as Italian Aegean Citizenship. We also discuss the legacy of the islands beyond the amnesia and nostalgia concerning Italy’s imperial impact on the Mediterranean region.”

Valerie McGuire is a Lecturer of Italian and Comparative Literature at the University of St Andrews (Scotland). Her research investigates colonialism, postcolonialism and Mediterraneanism in Italian history and culture. She received her PhD from New York University and is the author of Italy’s Sea: Empire and Nation in the Mediterranean, 1894-1945 (Liverpool University Press, 2020).

Chris Gratien is Assistant Professor of History at University of Virginia, where he teaches classes on global environmental history and the Middle East. He is currently preparing a monograph about the environmental history of the Cilicia region of the former Ottoman Empire from the 1850s until the 1950s.

Share
Facebook
Twitter
WhatsApp
Linkedin
Previous article“Turkey And The Rescue of European Jews ” by I. Izzet Bahar
Next article“Turkey’s Erdogan Crushes Hopes of Reform,Lashes out at akp Veteran” by Amberin Zaman