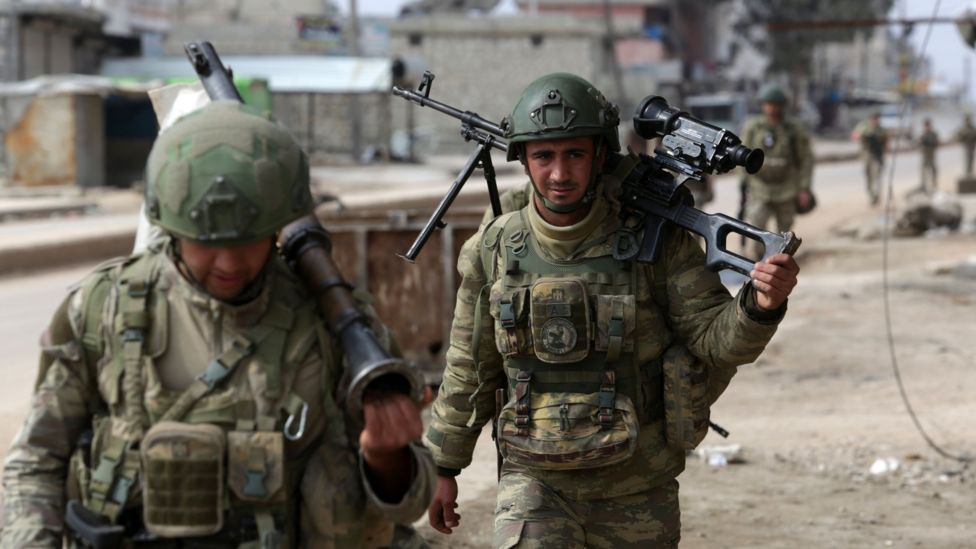 « Turkey deployed hundreds more troops in northern Syria overnight in preparation for a long-suspended offensive against American-backed Kurdish forces, according to two officials, a move that could help President Recep Tayyip Erdogan shore up flagging domestic support and put pressure on the U.S. and Russia to rein in the Kurdish troops » reports Bloomberg.

Earlier this month, Erdogan signaled he was planning a new campaign after a spate of attacks by Kurdish YPG forces that Ankara regards as a mortal threat because of their link to Kurdish insurgents in Turkey. As the troop buildup was getting underway, he resumed his tough talk, without specifically declaring a military incursion was imminent.

“Turkey is currently facing terrorist threats from across the border,” Erdogan said on his way home from Azerbaijan, state-run Anadolu Agency reported on Wednesday. “We will continue our fight against terrorism with the same determination” at home and across the border, he said.

In 2019, Ankara hit the brakes on an earlier planned Syria foray following separate cease-fire agreements with the U.S. and Russia, which both have forces stationed there. But he recently accused both countries of not fulfilling their promises to force the YPG to withdraw at least 30 kilometers (20 miles) from the Turkish border.

The Kurdish forces played a major role in the U.S.-led effort to quell Islamic State in Syria, and Washington’s support for Turkey’s enemy has been a major point of contention. Turkey views the YPG as a terrorist group affiliated with the Kurdish separatist PKK, which the Turkish military has been battling for more than three decades and is classified as a terrorist organization by the U.S. and European Union.

A campaign against the Kurdish forces could help Erdogan consolidate the support of Turkish nationalists and conservatives at a time when soaring inflation threatens his popularity. But it also risks a standoff with the U.S. that could hurt the lira, this year’s worst-performing major currency.

The lira remains vulnerable to changes in geopolitical risks affecting direct investment and tourism from Western countries, which make up the bulk of dollar-financing that Turkey relies on to finance its growth.

Erdogan has said he will meet with U.S. President Joe Biden next week at the world climate summit in Glasgow, Scotland, though there has been no confirmation from Washington. The two leaders will also both attend the Group of 20 meeting of major economies in Rome this week.

Turkey has been shelling YPG positions across the border since two of its policemen were killed in Syria and mortars were fired into its territory earlier this month. The U.S. condemned the killings but also urged all sides to respect cease-fire zones.

The planned offensive is meant to seal more than two thirds of Turkey’s 910-kilometer (560-mile) frontier with Syria, the officials said, speaking on condition of anonymity to discuss strategy. Turkey would aim to capture areas south of the town of Kobani, also known as Ayn al-Arab, to connect areas under its control west and east of the Euphrates river, they said.

Another potential target is to capture the Menagh air base near the town of Azaz from YPG forces who carry out hit-and-run attacks on Turkish forces and allied Syrian rebels who would join it in the planned campaign, the officials said.

Just last month, the Turkish military sent more troops into a different area of Syria as Erdogan prepared for a critical meeting with Russian and Iranian leaders. The intent was to signal Ankara’s resolve to keep blocking an assault on Idlib, one of the Syrian civil war’s last fronts, in order to head off another flow of refugees into Turkey.

The area targeted for the currently planned offensive is largely empty of people. The troop reinforcement took place after parliament voted on Tuesday to allow the deployment of troops in Syria and Iraq for two more years.

In a tactic to prevent Moscow from openly opposing Turkey’s war plans, Turkish forces may withdraw from a few areas south of the strategic M-4 highway that forms Idlib’s southern border, the officials said.

“The Turkish side was told that Moscow is against” this stratagem, said Elena Suponina, a Moscow-based Middle East analyst. “Still, the most Russia will do is to criticize the offensive — it won’t actually try to stop it from happening. That’s probably enough for the Turks.”

“Turkey is a member of NATO. It is also a hostage-taking state sponsor of terror. Soon, the Biden administration is going to have to decide...
Read more
ARTICLE A LA UNE