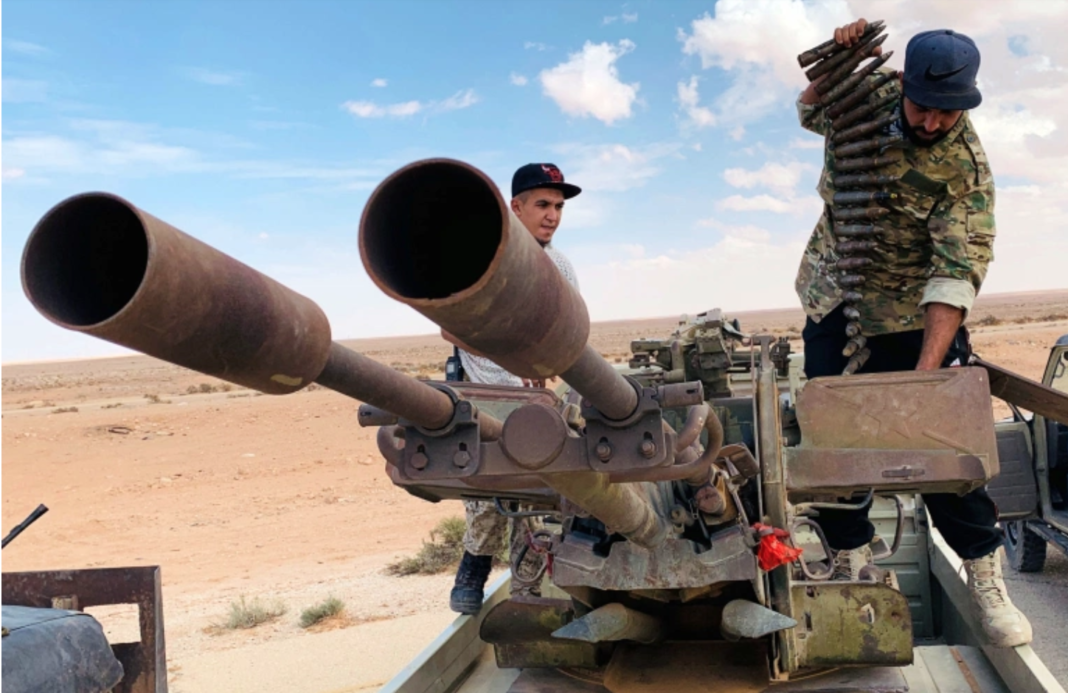 Turkey might have managed to stave off pressure in the Berlin conference on Libya, but as the December elections near, the Turkish military presence in the country will remain a source of tension.

Turkey might have managed to stave off pressure to withdraw its military presence in Libya by agreeing to pull out the Syrian militia, but Ankara’s policies are widening the divide between rival Libyan actors and expanding the anti-Turkey front in the international arena.

Germany hosted the second Berlin conference on Libya on June 23 in a bid to advance efforts to carry the country to nationwide elections in December under a road map agreed as part of the UN-led efforts.

The process following the first Berlin conference in January 2020 has seen the announcement of a permanent cease-fire, the formation of a new unity government, and the formation of a military committee tasked with the unification of rival armed forces in the country.

Yet no progress has been achieved on efforts to merge rival Libyan institutions, form a national army, neutralize irregular Libyan militias, or draft a new constitution and election laws. The presence of foreign fighters in the country has turned into a major obstacle before all efforts on these fronts.

International calls for the withdrawal of foreign fighters from the country were echoed in the final text of the meeting as well.

However, the article was accepted with Turkey’s reservations. According to the Libyan sources, Turkey sought to use “all mercenaries” instead of “all foreign forces” in the wording of the text in a bid to secure the presence of the Turkish troops on the ground, yet its demand was denied by Egypt.

Ankara’s strategy is to bargain away the Syrian fighters it transferred to Libya in a bid to keep the Turkish troops in the country and to keep the spotlight on foreign militia fighting for Libya’s eastern-based forces loyal to retired Libyan Gen. Khalifa Hifter.

As part of this strategy, Turkey sought to force the Libyan Government of National Unity to back Ankara’s stance ahead of the conference. A large, high-level delegation including Turkey’s foreign, defense and interior ministers as well as presidential spokesman, intelligence chief and chief of the general staff paid an unannounced visit to the war-torn country on June 12.

While Libyan Foreign Minister Najla al-Mangoush has kept a firm stance on the withdrawal of all foreign forces from the country, the head of the unity government, Abdulhamid Dbeibeh, who was in close contact with Turkey’s Foreign Minister Mevlut Cavusoglu during the conference, is making a distinction between foreign fighters and mercenaries.

Dbeibeh’s distinction favoring Turkey has become apparent after his meeting with Secretary of State Antony Blinken. Following the meeting on June 24, Dbeibeh said he stressed the importance of urgent withdrawal of “all foreign mercenaries » from the country.

The State Department’s readout on the meeting, in turn, said the parties emphasized the importance of “the immediate withdrawal of all foreign forces and mercenaries from Libya.”

Speaking to the press on June 24, Acting Assistant Secretary of State Joey Hood acknowledged the difficulties before the implementation of the withdrawal calls but added that “the Libyans are clear: They want everybody out.”

“We can’t wave a magic wand and make this happen, but working together with the Libyan people, I think there’s a strong chance that we can set the conditions to provide the incentives and maybe other parameters for these forces to leave,” Hood said.

In the absence of a mechanism to enforce the withdrawal of foreign forces, the matter rests on negotiations between the involved parties, particularly between Russia and Turkey — two powers heavily involved in the conflict. As the conference was ongoing, The Associated Press reported that Russia and Turkey “tentatively agreed” to begin a process of withdrawing foreign fighters from Libya, citing a US official. The official told the AP the deal is not yet done but that the two countries were to discuss a withdrawal of about 300 each.

Mangoush voiced optimism over the matter. “We have progress in terms of mercenaries, so you know hopefully within coming days, mercenaries from both sides are going to be withdrawing and I think this is going to be encouraging,” she said, speaking in a joint conference with Germany’s Foreign Minister Heiko Maas at the end of the conference.

Maas said the withdrawal would have to be carried out “step by step” and in a balanced way to ensure neither Russia nor Turkey do not gain an advantage.

Sparring parties seem to have divided over which mercenaries leave the country first. The Russian-backed eastern forces have advocated the pullout of Syrian and Turkish fighters but sought to keep Syrian, Chad and Sundanese militia fighting in their ranks.

Ankara, in turn, has argued that withdrawal of Turkey from the country before the removal of militia backing Hifter would turn the tables against the legitimate Libyan government. For Turkey, the Turkish troops’ presence in the country is based on an agreement Ankara reached with the country’s legitimate government and is aimed at training the Libyan forces. Some Libyan groups supported by Turkey have also expressed their fears that withdrawal of Turkey might lay the ground for Hifter to reignite the war.

A road map proposed by France suggests a gradual withdrawal of foreign fighters. The road map unveiled by French President Emmanuel Macron ahead of the G-7 summit foresees the withdrawal of Syrian fighters first, Wagner mercenaries second and Turkish troops third in a bid to unify rival Libyan armies.

Turkey’s objections indicate that Ankara is also supporting a gradual withdrawal in coordination with Russia. The simultaneous withdrawal of Syrian fighters from both camps might give Ankara time to prolong the presence of the Turkish troops in the country.

First of all, unlike his public remarks, Dbeibeh might be adopting a different stance over the presence of the Turkish troops in his private deliberations. As the head of the unity government, he has to take into account Hifter-led forces’ demands as well. Besides, in addition to Turkey, Dbeibeh needs the support of France, Italy and Egypt, which are at odds with Turkey over the presence of foreign fighters.

Furthermore, the Biden administration’s support of the UN’s road map indicates the days that Turkey imposed its own realities on the ground have long gone.

Hifter has already claimed that conditions on the ground are making it impossible to hold elections, fueling the pressure on Turkey further.

Turkey’s political blunders are also adding to the controversy. The Turkish delegation’s visit on June 14 has undermined the budget bill vote in the Tobruk-based House of Representatives. Head of the Defense and National Security Committee Talal al-Mihoub blamed Dbeibeh’s open support for Turkey and the Turkish delegation’s unannounced visit for the veto of the budget bill.

“We, the Libyans, have been fighting the Turks since 1825; it hasn’t started today,” Misbah Duma, a parliamentarian, said during the budget discussions marred by a brawl.

Hifter-led forces aside, some other Libyan groups are also irked by Turkey’s overreaching policies in the country.

Aref Ali Nayed, head of the Ihya Libya Movement, called on the United Nations to push for a binding timetable for the withdrawal of the Turkish and Turkey-backed foreign fighters. Nayed also lashed out at the Turkish delegations’ frequent visits to Mitiga airport — a strategic airbase where most of the Turkish troops are based.

Apart from its military presence, some Libyan circles have also accused Turkey of eyeing economic gains through its military intervention. Turkey’s President Recep Tayyip Erdogan’s call on his Azeri counterpart Ilham Aliyev for joint investments in the Libyan energy sector has irked many in the country, leading to questions over Turkey’s respect for Libya’s sovereignty.

Deepening confrontations with the various Libyan actors further increase the question marks over the future of controversial military cooperation and maritime deals Turkey had signed with Libya’s Tripoli government in 2019 — the agreements have yet to be ratified by the House Representatives.

Meanwhile, Ankara’s insistence on keeping its troops in the country also mars its efforts to improve ties with Egypt, which asks Turkey to fully withdraw from Libya before a normalization between the two countries can be achieved.